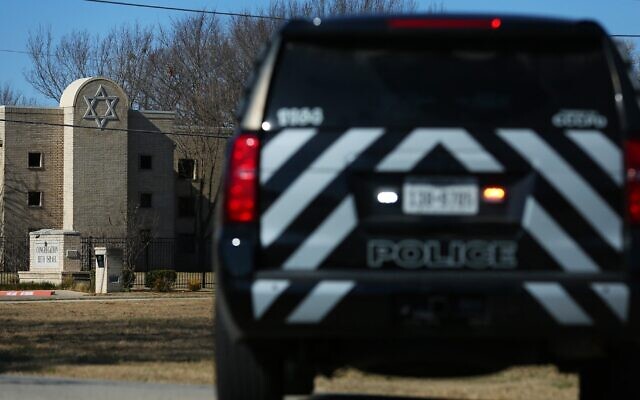 A Police vehicle sits outside of the Congregation Beth Israel Synagogue in Colleyville, Texas, some 25 miles west of Dallas, Jan. 16, 2022. (Andy Jacobsohn/AFP via Getty Images)

(JTA) — Rabbi Charlie Cytron-Walker has publicly described for the first time the moment he and two other hostages escaped a gunman in his synagogue in Colleyville, Texas, on Saturday

“The last hour or so of the standoff, he wasn’t getting what he wanted,” Cytron-Walker told the BBC in an interview posted on Monday morning. “It didn’t look good. It didn’t sound good. We were very, we were terrified.

“And when I saw an opportunity where he wasn’t in a good position, I made sure that the two gentlemen who were still with me that they were ready to go. The exit wasn’t too far away. I told them to go, I threw a chair at the gunman and I headed for the door. And all three of us were able to get out without even a shot being fired.”

The 11-hour standoff in the Fort Worth suburb Saturday ended when an FBI SWAT team raided the synagogue after the rabbi and two other hostages fled. The gunman, Malik Faisal Akram, a British citizen, died in the raid.

Cytron-Walker credited the security training he has received, including from Jewish community security consultants, for helping him to manage the crisis.

“For the past few years, we’ve had training — it’s not training it’s I guess, courses, instruction — with the FBI, with the Colleyville Police Department, with the Anti-Defamation League, with Secure Community Network, and they really teach you in those moments that if you’re when your life is threatened, you need to do whatever you can,” he said. “To get to safety you need to do whatever you can to get out.”

Cytron-Walker also thanked the same agencies in a separate statement released through a spokeswoman. “Without the instruction we received, we would not have been prepared to act and flee when the situation presented itself,” he said.

Akram was seeking the release of Aafia Siddiqui, a Pakistani Muslim woman serving 86 years for attempting to kill U.S. security officials in 2008. He also made clear during the hostage crisis that he was singling out a Jewish target because he bought into antisemitic theories, according to a congregant who was listening to a livestream before the situation broke into public view. Siddiqui during and after her trial also peddled antisemitic invective.

His family said in a statement that Akram was mentally ill and was determined to die.

Akram was from Blackburn, in England’s northwest. On Sunday, police in Manchester, south of Blackburn, said they had detained two teenagers in South Manchester for questioning in relation to the Texas synagogue case. The tweet from Greater Manchester Police did not add further information. PJC