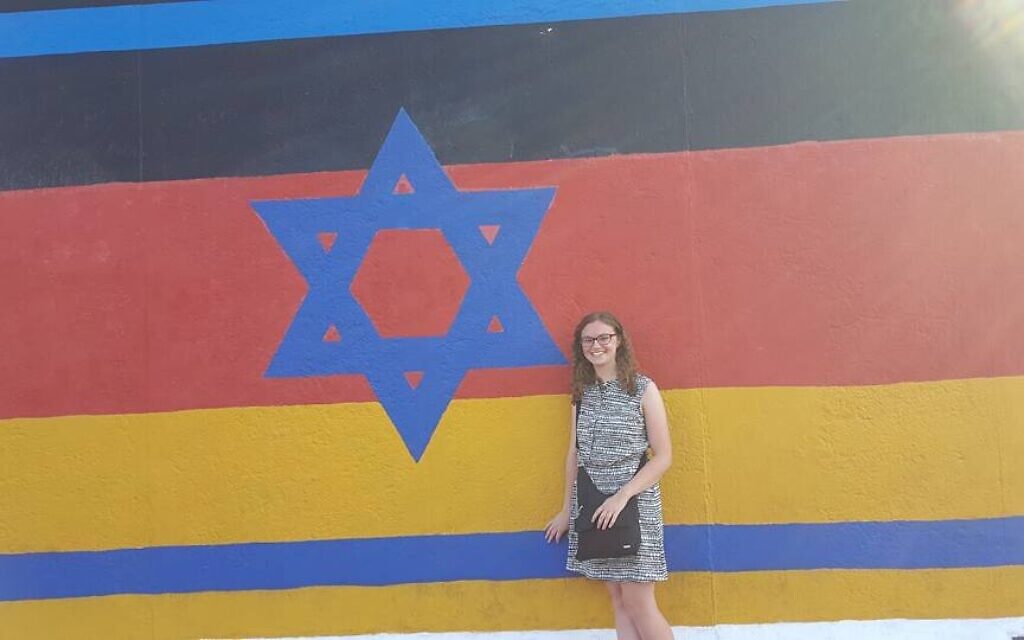 Madison Jackson stands by the Berlin Wall in Berlin, Germany, during her summer spent exploring Jewish Europe in 2018. (Photo courtesy of Madison Jackson)

For the past several days, I have been living at the Eden Hall campus of Chatham University in Gibsonia, devoting my time to an intensive week of writing, a residency for Master of Fine Arts students in creative writing — my graduate program — where I focus on creative nonfiction writing.

But this residency is just the start of my summer writing adventures. At the end of June, I will depart the United States for Europe. For a year, I have planned this trip, which will allow me to combine my passion for writing with my enthusiasm about global Jewry. I call it the “Global Jewish Pen Pal Program Europe Tour.”

I was first in Europe in 2014, as a high school student participating in the Szarvas International Jewish Youth Camp North American Fellowship program. Szarvas, a summer camp two hours from Budapest, Hungary, nestled on the banks of the Körös River, brings together Jewish kids and teenagers from 25 countries around the world to explore Jewish identity and global Jewish life.

Inspired by my time at Szarvas and wanting to learn more about what it means to be Jewish in Europe today, in 2018 I spent three months in Warsaw, Poland, interning at the American Jewish Committee Central Europe office.

In the years between my European Jewish travels, I’ve been learning about Jewish life in Europe and around the world through different lenses — both historical and contemporary. I’ve curated my own global Jewish library and tell friends they can pick almost any country, and I will have a book about Jewish life there on my bookshelf. I’ve attended Zoom lectures and virtual tours of Jewish communities around the world.

In 2020 I founded a nonprofit organization called the Global Jewish Pen Pal Program. The organization matches Jews of all ages with Jewish pen pals around the world to help people learn about global Jewish life through firsthand stories.

This summer, my tour will take me from Western Europe to Central Europe to Eastern Europe and back again. Throughout five weeks, I will visit seven countries and 10 cities.

The trip has a dual purpose: I will split my time between spreading the word about the Global Jewish Pen Pal Program and conducting research about contemporary Jewish life in Europe for my writing.

In each city, I will be hosted by a different European pen pal who lives there. The pen pals will show me what Jewish life looks like in their cities — whatever that means to them — and I will interview them about their Jewish identities. I hope to educate Pittsburgh Jewry a bit about European Jewish life through articles I will write for the Pittsburgh Jewish Chronicle about my experiences.

I am excited to return to Europe and see Jewish life in a variety of locations from the perspectives of locals. I look forward to sharing some of my travels with you.

Madison Jackson is a graduate student at the Chatham University MFA program in Creative Nonfiction Writing. She lives in Squirrel Hill and is the founder and executive director of the Global Jewish Pen Pal Program.