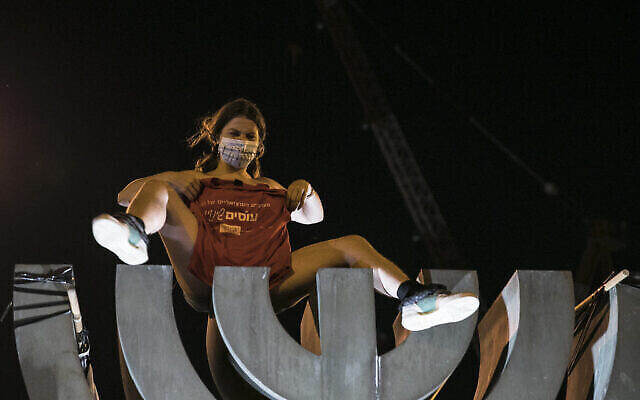 A topless protester sits on a menorah statue near the Knesset during a demonstration against Prime Minister Benjamin Netanyahu in Jerusalem on July 21, 2020. (Yonatan Sindel/Flash90)

The protester who took her top off while standing on a menorah statue outside the Knesset pushed back against criticism of her conduct on Wednesday, insisting that she was not disrespecting a state symbol and that only through her actions the previous evening was she able to draw attention to her cause.

“I do not see what I did as a disgrace to the state,” the social work student told Army Radio after Knesset Speaker Yariv Levin and right-wing pundits called for her arrest.

“It was important for me to put the social workers’ strike on the national agenda. A woman’s breasts can make headlines, while thousands of other cases [that neglected social workers are expected to deal with], including rape, are not addressed,” she said.

The woman, who declined to reveal her identity, told the Kan public broadcaster, “It is absurd that a woman’s breasts can make such huge headlines and even lead to a response from the Knesset speaker, even while the country is on fire and there are more than a million unemployed.”

“For shame. I stand by every person’s right to protest, demonstrate and express their opinion,” Levin wrote on Facebook. “But no country allows you to desecrate its symbols of state.” 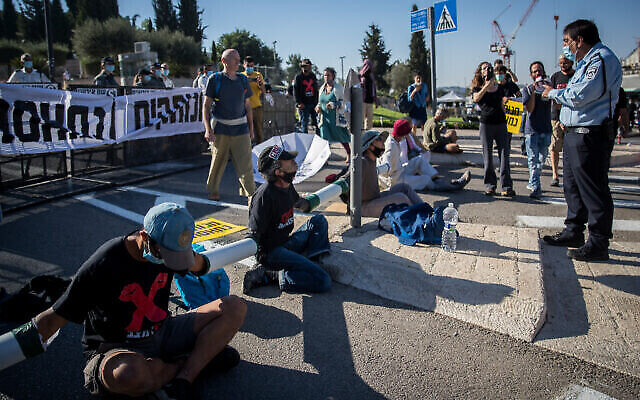 Anti-government protesters attempt to block the entrance to the Knesset in Jerusalem, July 22, 2020. (Yonatan Sindel/Flash90)

He called for the woman to be “brought to justice, not just to punish her, but also for the educational and civic message that needs to be very clear.”

Opposition chief Yair Lapid fired back, “The prime minister degrades the symbols of the state every time he marches to court [for his criminal trial].”

“I don’t love the fact that people are exposing themselves, but that is not the real problem. Everything has become legitimate here: Basic Laws are allowed to be broken, a prime minister can serve while under indictment, but God forbid someone shows their boobs and all of a sudden everyone is horrified,” he added in an interview with 104.5 FM radio.

“I didn’t think about this act [in advance],” the woman told Jerusalem FM radio in another interview. “It wasn’t some provocative sign. It was simply a very real moment by me, with myself.”

“Apart from that, I’m Jewish. I love my country. I’m not an anarchist. I believe the state should take care of its citizens. And if the menorah is a symbol, my body is also a symbol. Maybe my action is controversial, but I think it is dwarfed by what is going on in our country,” she added.

“Maybe now that I took off my shirt, somebody will care about the social workers. It’s meant to change perceptions,” she told Haaretz. 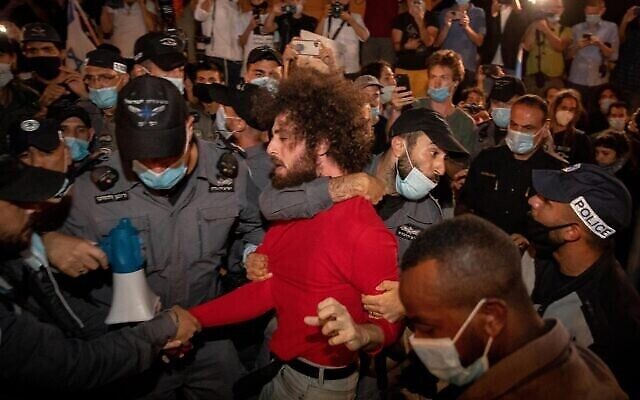 Police officers detain a man during a protest against Prime Minister Benjamin Netanyahu outside his official residence in Jerusalem on July 21, 2020. (Yonatan Sindel/Flash90)

The student was one of thousands who protested in Jerusalem on Tuesday night against Prime Minister Benjamin Netanyahu and his government’s policies.

Her action came as the government reached understandings with the social workers that will see them end their two-week strike.

After largely peaceful protests outside the Prime Minister’s Residence, during which the demonstrators marched to the nearby Knesset and back, police began forcibly clearing people from Paris Square outside Netanyahu’s home at about 1 a.m.

Thirty-five people were arrested when clashes broke out, but they were all released by police on condition that they refrain from approaching the prime minister’s residence. Four others were arrested Wednesday morning for attempting to block roads near the Knesset along with dozens of other protesters.

Demonstrators accused law enforcement of using excessive force. Several officers were filmed slamming one demonstrator to the ground, with one of them digging his knee into an activist’s face and neck.

The protester, 28-year-old Or Yerushalmi, told Haaretz that he was attacked after he tried to prevent a cop from punching a middle-aged woman who was protesting alongside him.

“I tried to stop him and hold back his hand, but then he and another officer yanked me to the floor. Then, two or three cops — I do not know how many for sure –grabbed me. One held me down and the other put his foot on my neck. It lasted a few seconds and hurt but I did not suffocate,” he said.

“We were not being violent. They just pulled out people at random and decided to arrest them,” he said.

Before that the demonstrations had a largely carnivalesque mood. Many chanted “no to violence,” while others danced, sang and beat drums, threatening to stay in the streets all night.

The protests brought together a wide range of groups, with some demonstrators railing against the government’s handling of the economic crisis caused by the COVID-19 pandemic and others calling for the premier to resign over his indictment on graft charges.