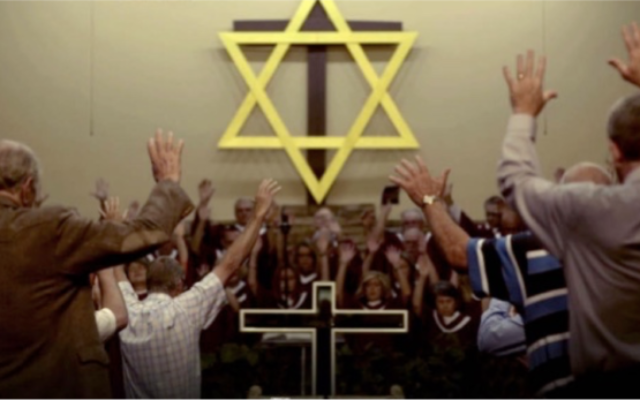 An evangelical congregation prays in “‘Til Kingdom Come.” (Photo by Abraham Troen)

It takes Yael Eckstein three days to get from her home in Israel to Middlesboro, Kentucky, but it’s a journey she is happy to make.

That’s because the city’s residents are staunch supporters of the International Fellowship of Christians and Jews, one of the largest organizations supporting humanitarian projects in Israel. At the time of filming, Christians had donated $1.4 billions to Israel through the fellowship. It was created by Yael Eckstein’s father, Rabbi Yechiel Eckstein, who named her as his successor.

Middlesboro’s residents are not wealthy. Their community is blighted by the decline of coal, economic recession and addiction. Yet they pool their small-dollar donations to the fellowship at their church under the guidance of the Bingham family, a local dynasty of pastors who preach that God will bless the nations who support the nation of Israel.

Director Maya Zinshtein zooms in on this relationship between evangelicals and Israel in her documentary “‘Til Kingdom Come,” which screens virtually at the Cleveland Cinemas and Acme Screening Room in Lambertville, New Jersey, through March 5.

Yael Eckstein explains that the fellowship supports programs that offer aid to Israel’s most vulnerable populations, including minorities and Holocaust survivors, but Zinshtein probes the darkness behind the fervor of its donors.

Evangelicals, Pastor Boyd Bingham III says, believe the return of Jews to the biblical land of Israel is crucial to bringing about the rapture, the second coming of Jesus Christ. It’s a period that will be marked by great “tribulations” in the region, including armed conflict, disease and natural disasters, which will culminate in the battle of Armageddon. Two-thirds of Jews will perish, and the other third will be forced to accept Christ as their savior.

“Tribulations” are key. Since the coming of Christ is supposedly heralded by upheaval in Israel, many of the film’s evangelical subjects react to news of violence in the region with eerie excitement.

“As I listen to news reports from Israel, I heard about the bombings and they were bombings even near children. When we see all of these things happening to the nation of Israel, it should give us all hope, that when we hear of these wars, we can look at and say that our redemption will begin,” an evangelical radio host says in an early scene.

The paradox of providing financial support for Israel while preaching the eventual downfall of the Jews clearly makes Zinshtein squirm, and she succeeds in making her audience just as uncomfortable as she is.

Zinshtein interviews Jewish leaders, many of them secular and progressive, who are alarmed by the role of Christianity in Middle East policy and see it as an erosion of the boundary between church and state.

With the election of President Donald Trump and Vice President Mike Pence in 2016 and the appointment of prominent evangelicals like Secretary of State Mike Pompeo, Israel journalist Barak Rand tells Zinshtein, evangelicals had the power to combine prophecy and politics. They advocated to move the U.S. Embassy to Jerusalem, he says, because they believed it was a step toward the rapture.

“This is political Christianity in which politics is a continuation of a prophetic vision,” said Barak Rand, Israel diplomatic correspondent.

Evangelical involvement in the region also alarms some Palestinian Christians.

“When they look at the future, honestly, they see a horror movie, wars and Armageddon and battles. Their scenario is not one that will help us Palestinians and Israelis coexist,” said Rev. Dr. Munther Isaac, who leads a congregation in Bethlehem.

Even Eckstein acknowledges the elephant in the room, although she has no intention of stopping her fundraising work.

“When the Christian community speaks about what they think is going to happen and what they envision, I agree with 99% of it. But the end is different. Only one of us can be right,” she said.

Zinshtein’s research is exhaustive, and the sheer number of perspectives she obtains on the relationship between evangelicals and Jews is both overwhelming and necessary in such a multifaceted story. Keeping track of the major players’ various political and religious motives and anecdotes makes for a dense viewing experience in a 76-minute film.

The director’s greatest strength is her ability to balance tough questions with the humanity of her subjects. From pastor Boyd Bingham IV’s story of how faith helped him overcome a deadly illness to Eckstein’s close relationship with her father and Rev. Isaac’s fear of increasing violence in his region, Zinshtein’s interviews convey that the personal is inseparable from the political, and every dollar donated extracts a hidden cost.

In addition to the Gershman screening, the documentary will be available to view via other theaters. PJC

Sophie Panzer is a staff writer for the Jewish Exponent, an affiliated publication.