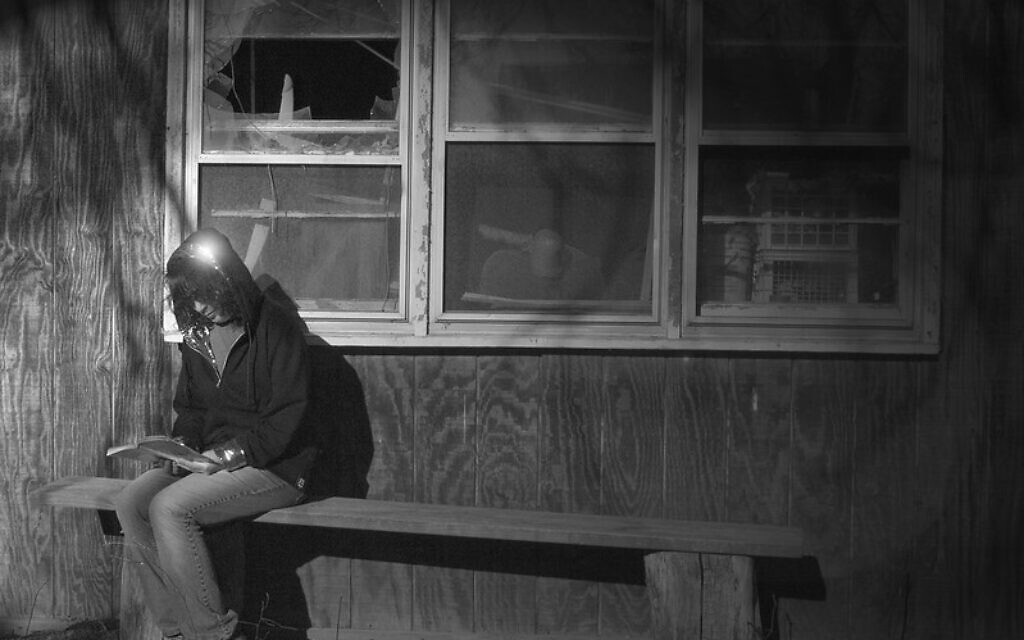 "Introvert in Disco Hoodie" by susanrm8. Photo courtesy of flickr.com.

This Sunday, after a year of being required to wear masks in public, Israelis were finally given permission to remove them when outdoors. At last, we can inhale fresh air unhindered outside our homes, and it feels like a significant milestone along the finally-shortening road to normalcy.

But I have a confession: I don’t know if I’m ready to take mine off yet.

And it’s not because I’m worried about the virus.

Let’s be real: the requirement to wear masks outside was never based on good data. For the past year, we’ve been grumbling about how ludicrous it was that, say, a pregnant woman standing at a deserted street corner might get fined for taking off her mask for a few gulps of fresh air, while a pair of business associates could sit over a cup of coffee unmasked and undisturbed. I wrote last June that the Ministry of Health shouldn’t have made the masks mandatory outdoors to begin with. And I don’t have any real statistics, but, anecdotally, from my own strolls around various neighborhoods, I’d say compliance was around 20% by the third lockdown. Many — if not most — Israelis haven’t been wearing masks outside for a long time already.

And yet … I kind of liked having an excuse to cover half my face.

I am an introvert: one of those creatures for whom being ordered to stay at home and keep my distance from other humans was secretly a source of relief. Not all introverts are shy or socially anxious, but I am both. Leaving my house and chancing an encounter with other people, even ones I am actually fond of, was always a bit stressful for me. What if I run into someone I know and they want to have a conversation when my social batteries are drained? What if I’m standing in a line and somebody invades my personal space — a vast expanse of awkwardness compared to that of most Israelis? What if someone recognizes me and says hi, and I have no idea who they are because I was too busy looking for escape routes when we were introduced?

And then, last year, I found myself in a strange new world where people were required to stand two meters away from me — and the dirty look I would always want to throw people standing too close was completely justifiable. A world where I could be reasonably expected not to recognize someone at a distance (or at least I could pretend not to). A world where I did not have to obsess over whether my facial expression appears friendly enough, where I had a perfect excuse to hide most of my face while in public. And a world where my homebody habits were not considered antisocial and unhealthy, but rather admirable and necessary, even lifesaving.

I must confess… it was kind of awesome.

Before you all start throwing bottles of hand sanitizer at me, don’t get me wrong — the pandemic was a terrible, horrible thing. I would never say I was happy any of this happened. My husband is chronically ill and high-risk, and because of this, we decided to keep our kids home and we homeschooled them until both of us were fully vaccinated. I am so grateful that if I had to be stuck with anybody, it was with them — but I still wouldn’t have chosen it. I, too, experienced fear, and despair, and loneliness. I missed my loved ones desperately and worried about them. The part where I gave birth smack in the middle of the second lockdown was especially insane. I know how privileged I am to have a good home to be shut in and the option of working from home so my family’s income was not harmed. Most of all, I am incredibly, incredibly lucky to live in a country where I “had to wait” “all the way” until the beginning of February to get vaccinated because I’m a healthy 34-year-old.
Still, in a country where introversion is seen as a social disability and personal space is not a thing, it was kind of refreshing to have the upper hand for a change.

For one outlandish year, introverts ruled the world. Our habits became everybody’s habits. Our ways became society’s ways. No more did we have to drag ourselves to parties and work our way toward the Introvert Corner, where those of our kind would gather and follow an unspoken contract of friendly mutual ignoring. No more did we have to endure crowded public spaces by closing our eyes, breathing deeply, and thinking of a quiet Happy Place. No more did we have to squirm out of the plans our well-meaning friends tried to make with us. Gone were the crowds, gone were the social obligations. We sat in blessed silence and basked in the glory of Netflix.

Okay, admittedly, for those of us with kids, we didn’t actually get much time alone. My children are older (except, of course, the one that was born during the pandemic), and thanks to a parenting philosophy that involves a lot of strategic ignoring, they are experts at occupying themselves. I imagine that many of my fellow introverts trapped in the house with younger children, when the preschools were closed or when sent into isolation, suffered a great deal from the lack of “me time.” And yet, many of the things that make the world so exhausting for us to navigate in normal times were simply no longer an obstacle.

So to those of you for whom removing the mask is also removing a welcome barrier to social interaction; to you who have spent the last year enjoying your superhero status as Master of the Couch and Defender of the Two Meters; to you who barely noticed when lockdown was lifted and must now go back to coming up with your own excuses to avoid social gatherings and eye contact… I see you. I’m sending you my deepest condolences.

Daniella Levy is the author of “Disengagement, By Light of Hidden Candles,” and “Letters to Josep.” Her prose and poetry — in three languages — have been widely published, and she was nominated for the Pushcart Prize for her short fiction. Born in the USA, she immigrated to Israel as a child, and currently lives at the edge of the Judean Desert with her husband and four kids. This first appeared in The Times of Israel.