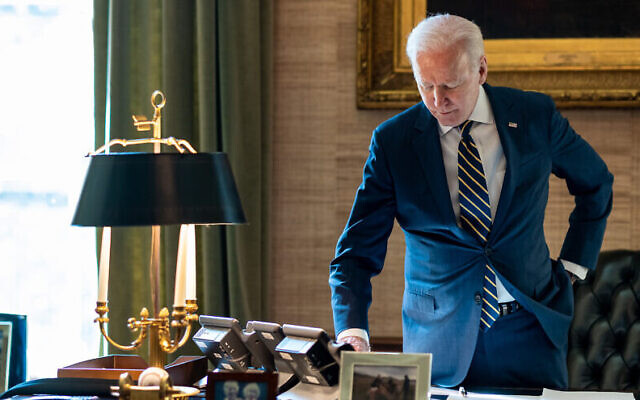 (JNS) U.S. President Joe Biden was scheduled to arrive in Israel on Wednesday for his first visit to the Jewish state as president, and there are a number of factors at play, experts told JNS.

Israeli Prime Minister Yair Lapid said during the weekly Cabinet meeting on Sunday that this would be a “historic” week for the Jewish state. Biden’s visit, he said, “will deal with both challenges and opportunities.” He emphasized, however, that the discussions would focus on Iran and the progress of its nuclear program.

Professor Eytan Gilboa, an expert on U.S.-Israel relations at Bar-Ilan University and a senior fellow at the Jerusalem Institute for Strategy and Security, told JNS that the fact of the visit itself sends several messages.

“When an American president travels to a foreign country, the trip itself is the message and it represents a commitment,” he said.

According to Gilboa, Biden plans to form a regional defense alliance at the Jeddah conference. The coalition will include the United States, Israel and a host of Arab countries, including Gulf states, Egypt, Jordan and Iraq. “In this sense, Biden continues Trump’s policy of the Abraham Accords,” Gilboa said.

“The new alliance is intended to contain Iran and, in the first stage, will be based on an air defense system against Iranian missiles and attack drones and cyber security measures. Biden may succeed in upgrading the relations between Israel and Saudi Arabia,” he said.

With this visit, he continued, Biden is telling Iran it has one last chance to reach an agreement with the West on its nuclear program, and that if it doesn’t, “the United States will sponsor an alliance between Israel, the Gulf countries, Egypt and Jordan as a mechanism of defense against you.”
The visit also sends a message to China, he said.

Biden announced last September that the United States is forming a new Indo-Pacific security alliance with Britain and Australia, called AUKUS, that will allow for greater sharing of defense capabilities, he noted. In addition to AUKUS, the United States also recently formed the “West Asia Quad,” an alliance between Israel, India, the UAE and the United States — officially referred to as the I2-U2.

“Both AUKUS and I2-U2 complete the belt of alliances designed primarily to defeat China,” Gilboa said. “The idea is to strategically connect the emerging alliance in the Middle East with the other alliances in Asia. And China is part of the Middle East alliance, because just a few months ago China signed a 25-year strategic agreement with Iran,” he explained.

The third message the visit sends is to the American people, Gilboa said.

The Biden administration completely reversed its policy toward Saudi Arabia and Saudi Crown Prince Mohammed bin Salman (MBS) following the 2018 murder of Saudi journalist Jamal Khashoggi, he noted. Biden even called MBS a “pariah” in connection with the murder. But “a lot has changed” since, said Gilboa. “Because of Russia’s war in Ukraine, Biden needs MBS to produce more oil to compensate for the loss of Russian oil and gas, and he prefers that over moral scruples, especially those adhered to by the so-called progressives.”

However, in light of his previous stance on Saudi Arabia and MBS, this leaves Biden in somewhat of an awkward position going into the November elections, he said, noting that Biden’s approval ratings are already very low and the U.S. economy is very bad. The kingdom’s normalization overtures to Israel may offer the U.S. president a way out, he said.

Prof. Joshua Teitelbaum of the Department of Middle Eastern Studies at Bar-Ilan University in Ramat Gan told JNS that “Biden has realized he needs to climb down from the tree and rejuvenate the relationship with Saudi Arabia, but he needs a way to do this.”

Teitelbaum agreed with Gilboa’s assessment that Biden is sending a message to the American people that in order to advance Arab-Israeli peace, he will “do what he can,” despite any moral qualms.

“This allows him to go to Saudi Arabia and meet with MBS,” said Teitelbaum.

In an op-ed published in The Washington Post on Saturday, Biden noted that he is set to become the first U.S. president to fly directly from Israel to Saudi Arabia. This would be “a small symbol of the budding relations and steps toward normalization between Israel and the Arab world, which my administration is working to deepen and expand,” he wrote.

In Saudi Arabia, Biden is scheduled to attend the GCC+3 summit (the Gulf Cooperation Council—consisting of Bahrain, Kuwait, Oman, Qatar, Saudi Arabia and the United Arab Emirates—along with Iraq, Egypt and Jordan) in Jeddah.

“In [Jeddah], leaders from across the region will gather, pointing to the possibility of a more stable and integrated Middle East, with the United States playing a vital leadership role,” he wrote.

Biden’s visit will result in a three-way deal that “helps all three parties achieve what they want,” Teitelbaum said.

Israel, he said, will see a soft rapprochement with Saudi Arabia, likely in the form of Israeli overflights to Asia countries as well as a toning down of anti-Israel rhetoric. The Saudis will return to the good graces of America and will also gain control of two Red Sea islands — Tiran and Sanafir — which will officially be returned to Saudi Arabia from Egyptian control. And America will receive more Saudi oil, while avoiding a major diplomatic crisis.

Teitelbaum also pointed to Sheikh Mohammed al-Issa, the Saudi cleric known as the “Zionist Imam,” who visited Auschwitz and who is now preaching relations with Israel, as a clear indication of Saudi Arabia’s improved attitude toward Israel.

Israel joining CENTCOM a year ago, he noted, was an early signal of warming relations with Riyadh, as it indicated that the Arabs were not rejecting Israel’s presence in the important group.

He also observed that Saudi textbooks “aren’t as antisemitic as they used to be.”

After visiting with Israeli leaders but before heading on to Saudi Arabia, Biden is scheduled to meet with P.A. leader Mahmoud Abbas in Ramallah. According to Gilboa, the meeting with Abbas will be the most insignificant part of Biden’s regional tour.

“There is a clear understanding that given the leadership in Ramallah and Israel, there is no place for any comprehensive initiative or peace proposals of the kind we have seen [in the past],” Gilboa said. “There is much agreement to weaken Hamas to prevent rounds of violence and strengthen the Palestinian Authority,” he added.

Despite this, there is concern in Israel that the U.S. interests at stake during this trip could translate into pressure on Israel to make concessions to the Palestinians.

Among these concessions is the reopening the consulate for Palestinian affairs in Jerusalem, which Israel objects to strenuously on the grounds that such a move would undermine its sovereignty over its capital. The consulate was closed under the Trump administration. Biden could also demand that Israel freeze construction in Judea and Samaria.

In conclusion, Gilboa said that the U.S. president’s visit to the region will likely be “very critical.”

“We will see how much the visit produces concrete results, how it is covered, especially in the countries directly involved, and also in Iran,” he said. PJC