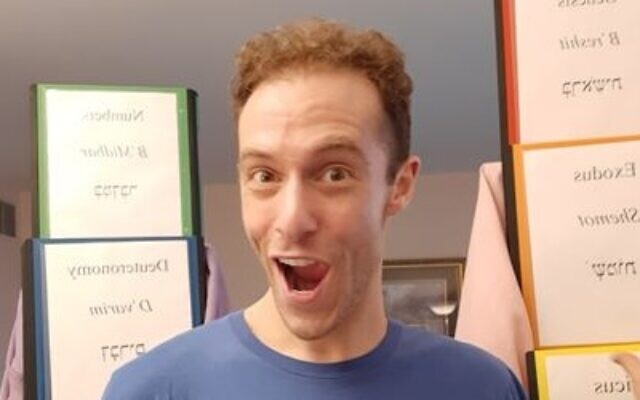 The story of “The Choral Torah: 5 Books in 4 Parts,” which New Light Congregation’s Sing A New Light will present on February 6, actually starts at a Jewish summer camp in the Berkshires.

There, Josh Ehrlich, a New Jersey native with an ear and a love for music, was writing songs for the camp choir when the camp’s director, former Pittsburgher Ethan Linden, started leading groups with daily aphorisms from the Bible. Ehrlich’s interest was piqued.

“All of a sudden, it galvanized into this excitement about what it could be,” Ehrilch told the Chronicle.

Ehrlich, who started studying in New York at the Jewish Theological Seminary in 2020 to become a cantor, will help lead the online program, which, organizers say, will help listeners “dig deep into our oldest text in search of new music.”

But Ehrlich said the performance is not simply just about singing or reciting the literal words of the Torah.

“The sort of ‘big picture’ version is to get people excited about the words,” Ehrlich said, “and also to appreciate all the things you miss when [Torah] is translated into English.”

The “‘Magic School Bus’-style ride” through the Bible will be performed by Ehrlich, Leilah Rosen and the all-sibling musical ensemble The Four Hermaneutics.

“At heart, the Torah is a piece of music,” according to promotional materials. “Its words are notated in ornate calligraphy like an ancient score and transmitted by cantillation. What’s more, we are commanded in its final chapters to ‘Write for yourselves this song; teach it to the children of Israel and place it in their mouths.’”

By day, Ehrlich works as a composer, lyricist, arranger, accompanist, music director and music educator in New York City. With a bachelor’s degree in linguistics from Yale University and a master’s in composition from Rutgers University, Ehrlich orchestrates for musical theater productions, bands and choirs at Camp Ramah in the Berkshires and The Leffell High School. He made his off-Broadway debut with “The Imbible: Day Drinking.”

But Ehrlich says he is incredibly proud of his work on “The Choral Torah,” which he composed in 2018 and 2019.

Admission to the program, which is supported by the Jewish Federation of Greater Pittsburgh and Slifka Center for Jewish Life at Yale, is free but advanced registration is required at singanewlight.org. PJC