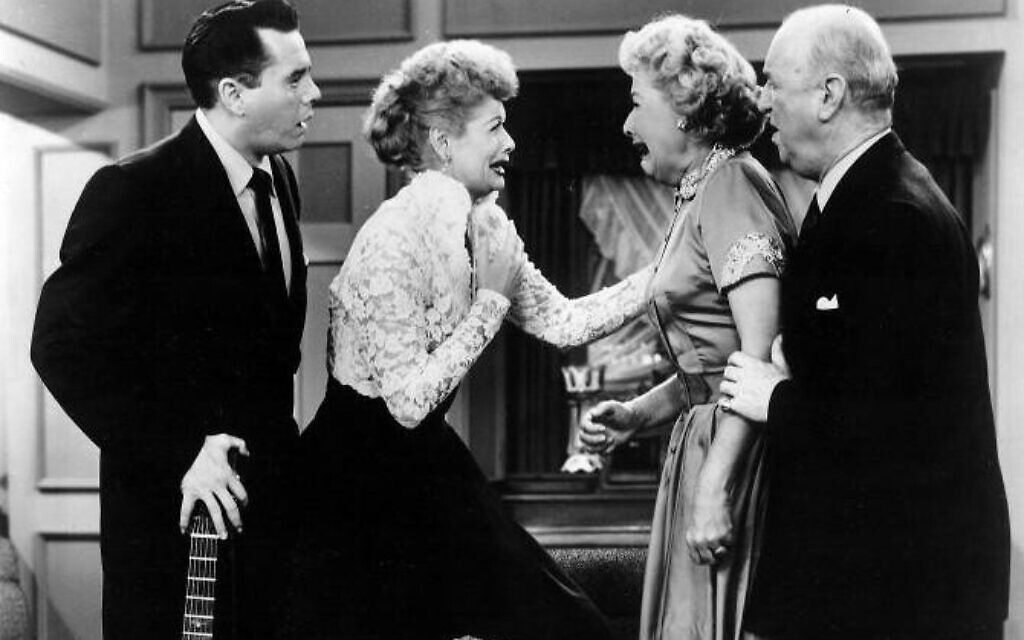 This story was originally published on Dec. 18 by the Forward. Sign up here to get the latest stories from the Forward delivered to you each morning.

“I Love Lucy” was groundbreaking for narrative television. It was the first television show shot with three cameras (hats off to Desi Arnaz for that). It was the first television show to feature a person of color in a lead role. One of its three main writers was a woman. Its success led to Lucille Ball being the first woman to own a major studio. And it brought into millions of homes a woman who was not only a funny physical comedian, but who, to this day, remains one of the most ambitious and confident women to appear on screen (even if she usually got thwarted).

The first time I saw “I Love Lucy,” I was 3 years old and my mother, in desperate need of a way to keep me distracted, put me in front of the television. It was there that I saw the greatest thing I had ever seen in the entirety of my 3-year-old life: the black-and-white image of Lucille Ball as Lucy Ricardo locked in a meat freezer.

This was both the start of my obsession with Lucille Ball and of the television becoming my primary caretaker. Over the years, I watched every “I Love Lucy” episode I could find on VHS. One of my favorite episodes was “Pioneer Women.” This episode is most commonly known as the one where Lucy bakes a 20-foot loaf of bread, but it’s really about discrimination and antisemitism.

“Pioneer Women” aired in the spring of 1952 as part of the first season of “I Love Lucy.” In the episode, Lucy and Ethel bet Ricky and Fred to see who can last longer living like it’s 1900. This means giving up all modern conveniences, fashions and technology. Over the course of the episode, Ricky commutes to work via horse and buggy, Ethel churns butter, and Lucy bakes that famous loaf of bread. As a kid, I loved all of this and would re-enact it with my favorite American Girl Doll, Kirsten, herself a pioneer, and think about the great future that lay ahead of us in vaudeville.

But the episode’s secondary story is where things really get interesting. Lucy and Ethel have applied for membership to an exclusive women’s club, The Society Matrons’ League. At the end of the episode, two representatives from the club show up for a surprise home inspection in order to “look them over.” They arrive to find the Ricardos and Mertzes dressed in their 1900’s garb complete with a butter churn in the living room. Lucy and Ethel are distraught thinking this will ruin their chance of acceptance, but Ricky comes to the rescue by saying that the reason they’re dressed so strangely is because they are rehearsing an act for his club.

This backfires. To the Society Matrons’ League the one thing worse than having eccentric taste is being a “show person.” The representatives admit that a few seasons ago they did start allowing one or two “show people” — because they needed money — so they might be willing to “make allowances.” Lucy questions why, exactly, they feel the need to “make allowances” for show people. The women double down. The episode ends with Lucy telling the women that they can go back and report that she has looked them over and has no desire to be part of their club. Ricky, Fred and Ethel cheer her on, and then the four of them celebrate by eating some bread.

I grew up in Ohio in a town with a country club that, up until the early ‘90s, did not admit Jews; where I was not allowed to visit some of my kindergarten classmates because I was Jewish; and where “Jews control Hollywood” was a common refrain (and something I interpreted as career advice). When the women from the Society Matrons’ League wanted to keep out “show people,” I knew exactly who that was code for: Jews.

There were no Jewish characters on “I Love Lucy” (although the first iteration of Lucy’s maiden name was Teitelbaum — it was changed after it was deemed too Jewish), but there were Jews behind the scenes. Jess Oppenheimer was the creator, producer and head writer of “I Love Lucy.” Lucille Ball was the one who asked CBS to hire Oppenheimer after she’d worked with him on “My Favorite Husband,” the radio program that was the antecedent to “I Love Lucy.”

The person Ball really had to fight for CBS to hire though was Desi Arnaz, who would be appearing in front of the camera. Executives thought Americans wouldn’t believe that “Lucy” was married to someone who was Cuban-American. And Lucille Ball herself, although white and Protestant, had grown up in a small town where the combination of a family tragedy and liberal outlook, made her an outsider and gave her a window onto alienation from American middle-class morality.

During the period when “I Love Lucy” was being produced, there were a number of Jews working in Hollywood. But no matter how well they had done, there were neighborhoods they couldn’t buy houses in, clubs they couldn’t join, and people who wouldn’t have them over. Because of this discrimination, most overt Jewishness did not make it onto the screen (a notable exception was “The Goldbergs,” a radio and later TV program), but was instead coded into seemingly non-Jewish material.

Jewish viewers could often pick out the Jewish references and gestalt — and also pick out who involved was Jewish — while non-Jews remained oblivious. Though Hollywood was in many ways created by Jews, there were lots of reminders that the ideal audience they were creating for were non-Jews, those non-“show people,” “real Americans” out there in the Midwest.

Something I only came to appreciate later was exactly how clever the structure of “Pioneer Women” was in its combining of the Society Matrons League and the pioneer days storylines. Lucy Ricardo got up to a lot of mishegas. There was no shortage of things the writers could have had her do that would have made her a Society Matrons’ League reject, but out of all of them they chose to have a set-up that not only led to Ricky saying they were in show business, but that also had the cast dressed as a piece of Americana.

As the club representatives stand there and evaluate them, it’s a reminder of how many institutions have tried to evaluate who gets to be a real American (even my American Girl doll, who had a similar costume to Lucy’s in the episode, didn’t have a Jewish counterpart until 2009). Having Lucy give her rebuke dressed as an American pioneer, highlights the notion that the concept of “real American” is as phony as a theatrical costume and that, in reality, the American story is multivariate and made up of all sorts of people.

I’ve never been able to find anything that confirms that this was the intent of “Pioneer Women.” Oppenheimer, like a lot of Jews of his generation, never spoke much publicly about antisemitism he faced, but he did have a history of adapting family history into “Lucy” episodes (an episode where Lucy can’t get a passport was based on his American-born mother’s citizenship being challenged). Still, for me, who first saw “Pioneer Women” 40 years after it originally aired, it was perfectly clear what it was really about.

And even if the creators never commented on the true undercurrent of the episode, Lucy Ricardo’s boundless confidence in herself — whether that she could be a star or that she could tell bigots exactly what she thought of them — rubbed off on at least one viewer (me, and maybe you, too) and is another reason why “I Love Lucy” has more than earned its place in the hall of fame of the great American art form. In this next year, may “Pioneer Women” finally be made available to stream, and may we all have Lucy Ricardo’s confidence in telling antisemites to go to hell. PJC

Victoria Myers is a New York based writer who loves television and would very much like her own television show. She was born in Akron, Ohio, which is known for rubber manufacturing.