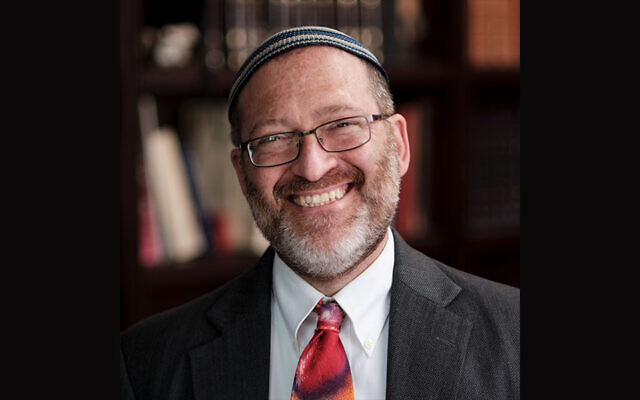 Rabbi Howie Stein had not intended for his first Shabbat service at Temple B’nai Israel to be delivered over Zoom in a mostly vacant sanctuary while wearing a mask.

“I’m on the bima, the president is running the computer, but I’m essentially looking at an empty sanctuary,” the newly installed rabbi recounted. “For me, that contact, being able to see people and gauge their reactions when I’m speaking is really important.”

Stein began his tenure at the Reform congregation in White Oak in June after the synagogue had closed its doors for in-person services because of the coronavirus pandemic. When hired late last year, he expected to be able to meet members of the temple in the traditional fashion – face to face. Instead, he has had to settle for Zoom coffee meet-ups and virtual interactions before services begins each week, en masse.

The rabbi acknowledged that getting to know his congregants will be more difficult due to forced social distancing for the foreseeable future.

“It’s going to be a lot of work to do these things that we would have done much more intensively and more organically,” he said. “It would have required a lot less planning to get to know people if I were able to circulate at an oneg versus if we are gathering before or after services and it is everybody on screen. I can’t have a conversation with one or two people.”

For Stein, being introduced to his new congregation online is just half of the story. Until the middle of June, the rabbi was still working at his previous congregation, Temple Beth Israel-Shaare Zedek in Lima, Ohio.

“People would have liked to have shook my hand, give me a hug, look me in the eye and say, ‘Thank you.’ We had to do a lot of that over Zoom instead of having the special oneg after services where we could sit and talk. It felt a little bit clipped and abrupt.”

Stein said the emotional experience of leaving one job and beginning another was mitigated by the virtual reality in which he found himself.

Temple B’nai Israel has had to make other accommodations due to COVID-19 as well, including rescheduling plans to say goodbye to its former rabbi, Paul Tuchman, who was scheduled to move to Arizona shortly after his tenure concluded in White Oak on May 31. Instead, he is still in Pittsburgh hoping for an August or September exit.

The congregation planned to formally bid Tuchman – its rabbi of 11 years – farewell at a luncheon in Monroeville Park on Sunday, July 26, according to congregation president Dick Leffel.

“The luncheon has already been postponed two or three time,” Leffel said. “It was originally supposed to be at Temple, then because of everything going on, we couldn’t do that. I think we’ll have about 35 people in a pavilion that can hold between 150-170 people. We’re spreading out for social distancing and everyone will be wearing masks.”

Leffel said that many members of the congregation feel as if they have gotten to know their new rabbi through the weekly Zoom services he has been leading since June, and have met his wife, Debbie Swartz, as she recites the blessing over the Shabbat candles, also on Zoom.

“They have the cutest little daughter, who often, if they’re Zooming from home, will sing along with him,” added Leffel.
Leffel said the congregation is making the best of the situation.

“We’ve met him on Zoom, which is certainly not as good but is better than nothing,” he said. “We hoped to have a reception but unfortunately that can’t happen.”

Although the situation might not be ideal, Leffel believes that Stein is the right rabbi for the congregation, especially now.

“We’re fortunate because Rabbi Stein’s background is in computer technology and computer science, that’s his undergraduate degree. So, he knows about this stuff, which has been very helpful,” Leffel said.

Some of Stein’s first rabbinic duties have been to assist members of the congregation who, previous to COVID-19, had little to no experience accessing online services.

“Rabbi Stein has organized a worksheet that we’re distributing about how to get on Zoom and do things,” Leffel explained. “He’s going to conduct a seminar for our members.”

Despite Zoom’s limited camera angles, Stein is not taking advantage of the possibilities for more flexibility in his wardrobe: he has not taken to wearing shorts or jogging pants while dressing more formally from the waist up, like some television anchors who stay seated behind a desk.

“I am wearing slacks, jacket and tie,” he laughed. PJC