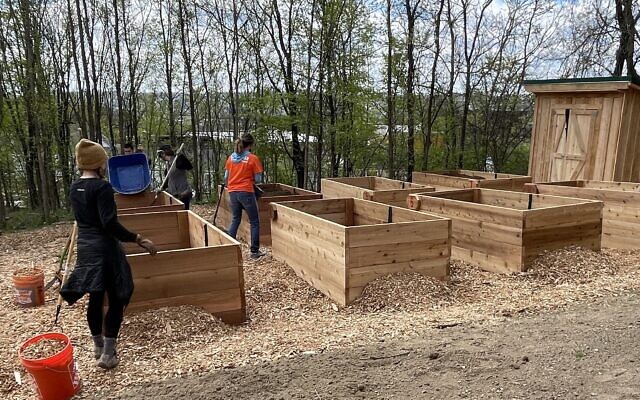 Rashawn Norwood wandered down Granville Street last week when he heard noise coming from a vacant lot in the Lower Hill. He saw volunteers preparing a garden, so he helped lug some soil.

“As soon as I learned what they were preparing, I was so happy,” the 14-year-old Hill District resident told the Chronicle.

Many people in his neighborhood rely on Family Dollar for their food, he said. The sight of a community garden replacing a vacant lot was more than worth the sweat he poured into helping build it.

Rashawn was part of a legion of about 40 volunteers who trekked to the Lower Hill on April 22 — Earth Day — to help create Sunny’s Community Garden, where there will be no plot-owners and anyone in the neighborhood can help themselves to some freshly grown produce.

The community garden — two sections spread over a 50-foot-by-80-foot lot — was conceived by Sandi Lando Welch. The native Pittsburgher previously spearheaded the Emma Kaufmann Camp’s Circle Camp for Grieving Children, an initiative for teens and young adults who recently lost a parent.

Welch made a “handshake agreement” for a five-year “faux lease” on the lot with the Rev. Glenn G. Grayson, who heads the Center That CARES, an organization that creates opportunities for children and young adults to achieve their life plans and goals. 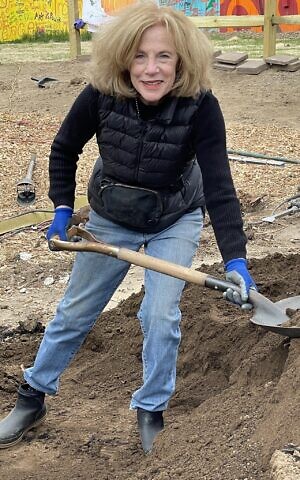 Though Welch is Jewish, there isn’t anything particularly religious or partisan about the space. Still, whether intentional or not, the project sounds a lot like the Jewish practice of pe’ah, wherein during the harvest an owner of a field must leave a corner open for the poor to take as they please.

“It’s not a typical garden,” Welch said. “We are going to grow and anybody can come and take.”

The first harvest, which will be ready for this fall, will include everything from beets, beans and peas to carrots, kale and “lots of herbs,” plus — once the deer-proof cages are ready — tomatoes and lettuce, Welch said.

The gardening area of the space features eight eight-foot-long raised garden beds, filled with soil and ready for the summer sun. The “gathering area,” separated by a wooden fence, holds tables where residents can pause for lunch or volunteers can lead educational activities.

Sarah Schanwald is a fellow with the Pittsburgh chapter of Repair The World, whose mission embraces the Jewish concept of tikkun olam. She helped drum up some of the volunteers last week on Earth Day.

“I’m so glad that Sandi is committed to providing the produce grown to the community and offering a space for community members to gather, as everyone should have access to fresh, nutritious and culturally appropriate food,” Schanwald said.

“Volunteering is in our DNA,” Hartzman said.

“You start with an empty lot and that’s the rewarding part — putting in the work and time and seeing literally the fruits of your labors,” she added.

Welch beamed as she walked around the garden last week. In fact, she’s already dreaming bigger and brighter.

“I hope this one is just the first,” she said. PJC