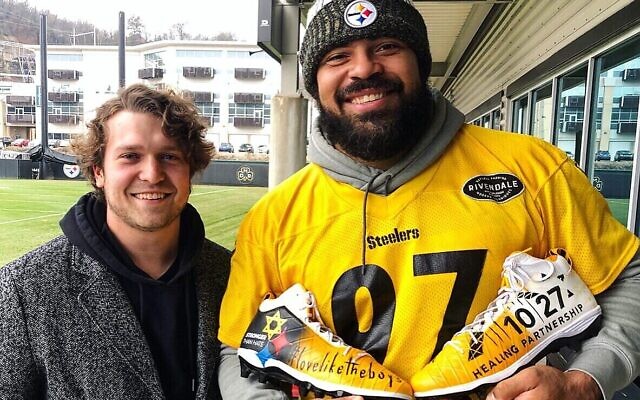 Pittsburgh Steeler Cam Heyward is donating a pair of game-worn cleats in memory of the Oct. 27 shooting victims.

For the “My Cause, My Cleats” week each NFL season, players can pick a cause, personalize their cleats and, as described on the NFL website, “wear their hearts on their feet.” Last season, Heyward chose The Cecil and David Rosenthal Memorial Fund at Achieva and the 10.27 Healing Partnership. 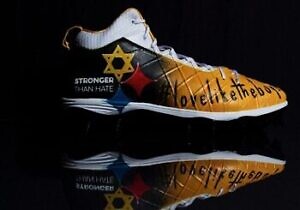 The star defensive tackle’s black and gold ombre cleats read “10.27 Healing Partnership,” “stronger than hate” and “#loveliketheboys” — a campaign launched in honor of brothers Cecil and David Rosenthal who were murdered during the Oct. 27, 2018, massacre at the Tree of Life building.

“Achieva is grateful to Cameron Heyward and the Rosenthal family for generously donating the custom game-worn cleats honoring everyone impacted by the Tree of Life shooting,” said Steve Suroviec, president and CEO of Achieva. “The cleats are significant to Achieva because they promote acts of kindness in memory of Cecil and David. The movement, called ‘Love Like the Boys,’ encourages others to share the pure, kindhearted nature of Cecil and David through uplifting deeds.”

Maggie Feinstein, director of the 10.27 Healing Partnership, is thankful for Heyward’s donation. “Healing is different for everyone, but we know that community solidarity plays a tremendous and positive role in the process,” she said. “Cam Heyward’s donation sends a clear message to the community and the families that we serve: all of Pittsburgh stands with us. We are so grateful to Cam and to everyone who supports our work.”

The raffle for the cleats runs until Nov. 23, and tickets are $20 each or $100 for six. The winner will be announced over a livestream at noon on Nov. 26, and the Steelers play later in the day. PJC