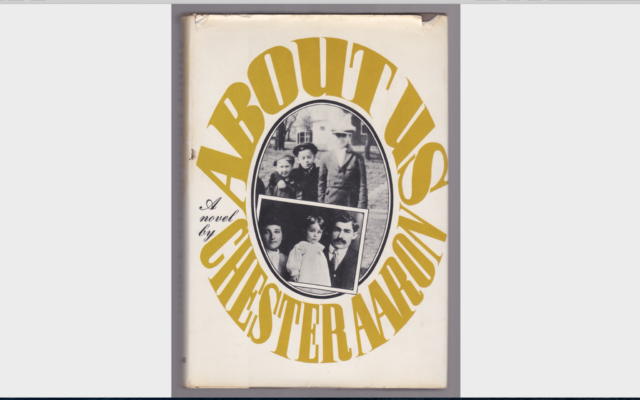 Chester Aaron’s first novel, “About Us,” from 1967, documented the declining faith and fortunes of the Kahn family of fictional Sundown, Pennsylvania, in the 1930s. (Image courtesy Rauh Jewish Archives at the Heinz History Center)

Sundown is a fictional coal patch along the Connoquenessing Creek, north of Pittsburgh. Only one Jewish family lives in Sundown — the Kahns. Al and Celia Kahn and their children run a small store, known almost universally as “the Jew’s store.”

The town and the family were the creation of Chester Aaron, who lived in North Butler, Pennsylvania, from his birth in 1923 until he left for the U.S. Army in World War II. I learned about his books from Steven Edelstein, who also grew up in small-town Western Pennsylvania and has also written about his experiences using the tools of fiction.

Through the eyes of his fictional counterpart Ben Kahn, Aaron wrote about Sundown twice, in his first novel “About Us” in 1967 and again in his last novel, “About Them” in 2011. He died in 2019 in California, where he went to live after the war. He became a writing instructor and an X-ray technician, and then he became a world-famous garlic farmer. Congregation B’nai Abraham in Butler recently finished saying kaddish for him.

The two Sundown novels corroborate various historic facts about small-town Jewish life in Western Pennsylvania, such as the way families spread across the region, creating a constellation among small towns. But the novels also contain many dramatic moments that feel invented, rather than fact disguised as fiction. It’s hard to tell what’s invented and what’s reported, and so it’s hard to embrace the book as a historic source.

What value does make-believe serve in the effort to understand the past? The “truth” of fiction is often experiential. Fiction can articulate the way it felt to live through a time and a place. This is where the two novels provide something that is hard to find in the historic record. Archival documents like minute books and store ledgers have a way of keeping certain intense, human experiences at a distance. You can define their contours, but it takes diligence. With fiction, all those dramas are right on the surface.

One illuminating example is Aaron’s portrayal of anti-Semitism — not its existence but its complexity. In “About Us,” the Kahns get it from all sides — from non-Jewish Polish immigrants in the town, from unemployed American-born miners and from the relatively well-off business and political leaders who run the town. The Kahns have only one reprieve. In “About Them,” we meet the lone Black family in Sundown, the Taylors, who share a deep bond with the Kahns. The relationship is suffused with mutual respect, in part because the two families, in the eyes of Sundown, are almost the same. (Almost: The Taylors notably must wait outside many places that would allow the Kahns to enter.)

The ugliness committed against these families — sometimes casual, sometimes horrific — is more multifaceted than “hatred” suggests. Everyone likes the Kahns. But in any disagreement, anti-Semitism sharpens the knives. A local gets drunk and disgraces himself, and he blames his situation on a very sober Ben Kahn: “Jew jinx. Hitler knows.”

Faith is another place where the novels elaborate on details that feel obscured in the historic record. The Kahns remain religiously observant through a period of economic success. Only when the Depression steals their few comforts, and then a beloved daughter tragically dies, does their faith drain away. These troubles are no harder than those the Kahns had experienced in Europe. Maybe they just expected more of America.

Their children seek meaning in art, war, politics and business. Religion becomes a residue of their youth. An elderly Ben Kahn passes a synagogue one day, and the echoes of prayer inside strike his heart like the smell of home cooking from the kitchen.

That nostalgia is also a source of historical insight. “About Them” finds an elderly Ben Kahn making a final pilgrimage to Sundown. Everything he sees is coated in delight, even though “About Us” had presented his childhood as dusky and grim. By surviving the experience, it became precious to him and to those who survived it with him. You can find that same tension and contradiction throughout many reminisces of the Jewish past. PJC