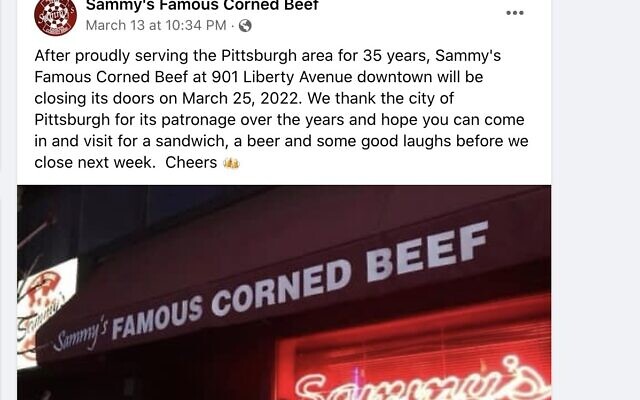 Sammy’s is about to serve its final Corned Beef Special.

After 35 years of operation and amassing a litany of regulars, the downtown staple and one of the business district’s last neighborhood bars is set to close its doors permanently, owner Sam Firman said. Its last day of operation is Friday, March 25.

“For the last 15 years, I’ve been working my way out of the business,” said Firman, who is Jewish and grew up in Penn Hills, the son of a B’nai B’rith volunteer. “It’s a good time to call it a day.”

Firman’s father worked in the hospitality industry but the younger Firman said he didn’t consider repeating his dad’s path. He was working in air conditioning when someone told him about the availability of a Sheetz convenience store — the future Sammy’s at 901 Liberty Ave. — with some equipment.

He took the leap, assuming he’d build the business, then sell it.

At its peak, several years after the Jan. 5, 1987, opening on Liberty Avenue, Sammy’s Famous Corned Beef had five locations — four downtown and one in Bloomfield. It was a time-honored institution, where Pittsburghers could grab a Corned Beef Special — sauerkraut optional — and a pint of beer.
Sammy’s also operated a popular haunt near the Allegheny County Courthouse for 25 years. Today, it is a shuttered Burger King.

The last Sammy’s location reopened in November 2020 after COVID-19 closures but Firman said the pandemic didn’t weigh heavily on his decision. His lease is up, and he’s ready to “take some time off and relax,” he said.

For now, Firman is basking in the attention the closure is receiving. Sammy’s closing has made it into local papers, as well as onto the region’s TV networks. And, more importantly, a lot of old faces are coming out of the woodwork to enjoy one last corned beef sandwich with Firman.

“It’s so heartwarming to see all these customers reaching out,” he said. “It’s overwhelming.” PJC