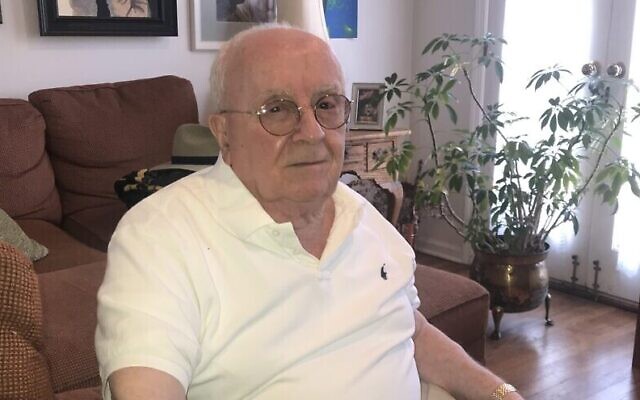 Judah Samet, 82, is a Holocaust survivor, former Israeli paratrooper and more recently a survivor of the Tree of Life mass shooting in 2018. (Photo courtesy of Judah Samet via JNS)

(JNS) – Judah Samet has been on the front lines of history more than once. A survivor of Bergen-Belsen and a former Israeli paratrooper, the 82-year-old also lived through the mass shooting at the Tree of Life*Or L’Simcha synagogue in the Squirrel Hill neighborhood of Pittsburgh on Oct. 27, 2018—the deadliest anti-Semitic attack in U.S. history.

Two years later, he sat down with JNS to share his recollections of that fateful day.

Samet was born into an Orthodox Jewish family in 1938 in Debrecen, Hungary. After surviving the concentration camp, he and his surviving family members, including several siblings, their mother and his maternal grandfather, immigrated to Israel with help from the American Jewish Joint Distribution Committee (JDC). Samet eventually served as a paratrooper and radio operator in the Israel Defense Forces. His brother, Jacob, an IDF machine gunner, was killed in combat in 1956.

Not long afterwards, Samet met his future wife, Barbara, at a wedding in New York. The couple married and settled in her hometown of Pittsburgh, where they raised their only child, Elizabeth. She and her husband, David Aaron Winitsky, have two children: Ezekiel, 19, and Alexander, 16.

A high-spirited grandfather, Samet credited his military training with helping him make accurate mental notes about the shooter, with whom he locked eyes briefly as he pulled up at synagogue that Saturday morning to attend services.

When he arrived, he said a man named Hank Feinberg came over to tell him, very quietly, “There is a shooting going on, you better go back,” recalled Samet. (Feinberg, a member of New Light synagogue, also survived that day).

At that moment, the shooter was engaged in a firefight with police. Robert Gregory Bowers, 46, was arrested at the scene after having just killed 11 Jewish worshippers and injured six others. In addition to the 63 federal crimes, he has been charged with another 36 separate crimes in the state of Pennsylvania.

“I’m not sure why he didn’t shoot me,” mused Samet. “Maybe he figured he needed to shoot at the detective, not at me, because the detective could kill him and I couldn’t.”

Before driving away, however, Samet made a point to look at the shooter so as to be able to identify him.

“The soldier in me came out,” he said. “The first thing I learned in the military is to see who is shooting. I made a note to be able to describe him.”

The FBI, with whom Samet says he spoke with four times, credited him for his accuracy and consistency, down to specific details about Bowers’ physical appearance and clothing.

Samet plans to testify at the trial.

“I will have to identify him,” said the octogenarian. “He may have changed some, but I have a very good memory.”

Samet, who is retired from the jewelry business, said he would “remember which salesperson sold which piece of jewelry to whom 25 years later.”

The trial date has not yet been set, but authorities are in touch about it.

“They said they will let me know in plenty of advance,” said Samet. “I will take the stand.”

He credited his “fearless” mother, Rachel (nee Mermelstein) Samet, with helping him survive a concentration camp, and having the courage to confront obstacles and threats in life.

Samet said he favors life imprisonment over the death penalty for the shooter.

“I don’t want him dead because if he is dead, he suffers no more,” he said. “I want him to live … Put him in a little room with a little window at the top, with no one to talk to.”

‘What happened here will never be forgotten’

In the two years since the shooting, Samet has been enjoying time with family, traveling to Montana for several speaking engagements with college and high school students, addressing the Pittsburgh police academy about his experiences, reading the works of George Orwell, and as a result of the ongoing coronavirus pandemic, these days attending synagogue services via Zoom.

During the nationally televised State of the Union address in 2019, U.S. President Donald Trump highlighted Samet’s dramatic survival story, and in a rare moment of national unity, legislators from both Houses of Congress sang “Happy Birthday” to Samet. Also last year, he met the president in person at the White House annual Hanukkah party.

Samet, who is against political extremism, doesn’t dismiss the threat of white supremacy (“I have a friend who is retired FBI, who says there are 17 supremacist organizations in Allegheny County” in his state), though believes that Bowers was a lone wolf.

“I don’t think anyone else who was a white supremacist here in Pittsburgh knew about it,” he said. “I don’t think there was any demonstration on his behalf.”

Plans are in the works to turn the Tree of Life synagogue building into a multi-use facility for the community, to include a cafe and the existing Holocaust Center of Pittsburgh, which was established in 1980, and is dedicated to remembrance, education and combating anti-Semitism.

Samet is supportive of the idea.

“That’s OK, perfect, for the Holocaust Center to move in there,” he said. “It belongs in Squirrel Hill—that’s the Jewish neighborhood here, and that way what happened here will never be forgotten.”