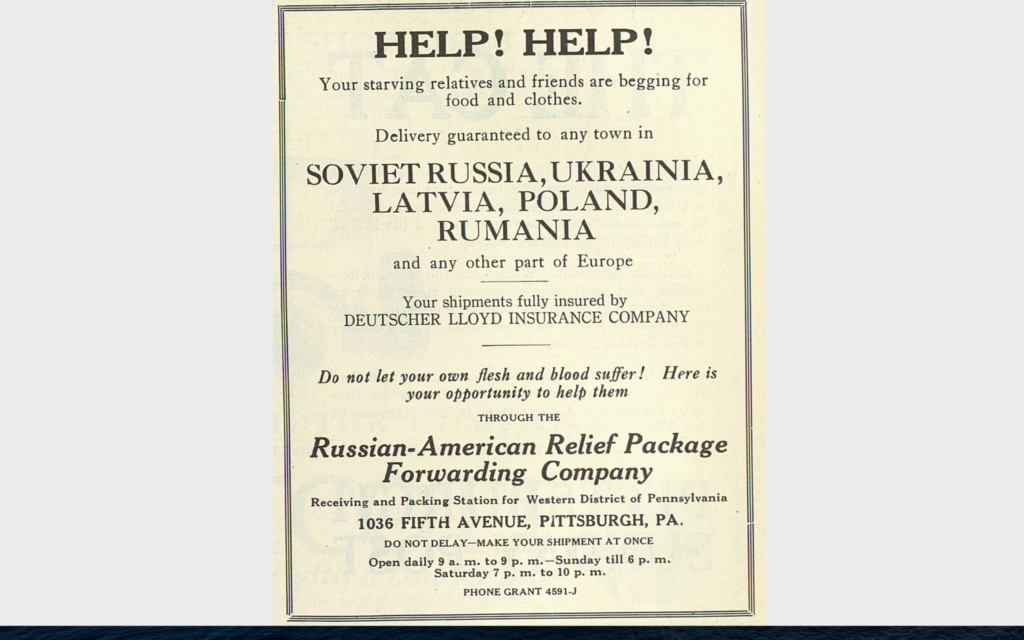 In March 1922, circulars appeared all over the city with a life-saving opportunity. No known copies exist, but an advertisement in the Jewish Criterion also presented the offer.

“Aid Your Own Relatives and Friends,” the advertisement announced. “Bring us whatever clothes, shoes, material and food you desire to send to your beloved, needy ones, and we will pack and ship them for you. Delivery guaranteed to consignee in any town in Soviet Russia, Ukrania [sic], Latvia, Poland, and other parts of Europe.”

What a relief this must have been. It was less than a year since President Harding had signed the Emergency Immigration Act of 1921. The law instituted immigration quotas based on country of origin. It severely curtailed immigration from many parts of Europe with large Jewish populations, including all the regions named in the advertisement.

Suddenly, families were split between those who had already made it to America and those who remained in Europe. In many cases, the breach would never be repaired. But in March 1922, as in the aftermath of any major change in policy, uncertainty prevailed.

The circular and the advertisement came from the Russian-American Relief Package Forwarding Co., a New York firm with a new Pittsburgh office at 1036 Fifth Avenue in Uptown. The Criterion only mentioned New York and Pittsburgh. But advertisements in The Forward revealed a much larger operation. The firm also was operating branches in Chicago, Cleveland, Hartford, Jersey City, Montreal, Philadelphia and Richmond.

Despite numerous reassurances put forth by the Russian-American Relief Package Forwarding Co, including claims of a recent audit by the State Bank of Philadelphia and indemnity by Deutscher Lloyd Insurance Co., skepticism about its operation was swift.

Sidney Teller of the Irene Kaufmann Settlement House wrote to the Joint Distribution Committee asking for any information it might have about the firm. The committee responded, “We have no knowledge of the Russian-American Relief Package Forwarding Co., nor can we recommend to you any company engaged in the business of forwarding packages to Russia except the American Relief Association.” Eager to spread the word locally, Teller published the entire correspondence, in full, in the Jewish Criterion.

But the advertisements continued, with added urgency. “Do not let your own flesh and blood suffer!” “Your starving relatives and friends are begging for food and clothes.”

For most of 1922, news about the Russian-American Relief Package Forwarding Co. came from its advertisements. In late June, it announced a milestone. It had recently received a cable from its representative based in Russia. “Receipts from the first relief shipments have been mailed to our New York office,” the advertisement claimed. It would only be a matter of time before the supplies reached their intended destinations.

A few weeks later, the advertisements began featuring lists of five-digit numbers. Each number represented a receipt that had supposedly been signed by a European relative who had received a package from family in Pittsburgh. “We have thousands of original receipts of delivery; come in and see them, or ask for free list and information.”

Then came an astonishing claim. In early November, the company wrote, “We beg to announce the opening here of our immigration department in connection with our shipping of relief packages. Arrangements have been made with the Russian Soviet government and other countries in Europe, that enables us to bring over your relatives without Suffering to them or to you. Here is the opportunity you have been praying for.”

The following spring, district attorneys in New York opened an investigation into the company. They couldn’t find any evidence that packages had reached their destinations in Europe. They even struggled to find evidence that the packages had left America.

If there was fallout in Pittsburgh, it never made the news.

Studying the impact of the immigration laws of the early 1920s, historian Libby Garland found many questionable operations like the Russian-American Relief Package Forwarding Co. Some wriggled through the law, some violated it outright, and some simply profited from widespread despair. “Law does not just exist in its codified form, but in lived experience as well,” she concluded. “The laws were not nearly as effective as their creators had hoped, since, as immigration officials, smugglers, immigrants and the general public soon discovered, there was a significant gap between how the immigration laws were meant to work in theory and how they actually functioned in practice.” PJC