A familiar face is ascending the pulpit at Congregation Beth Shalom. Rabbi Mark Asher Goodman, a Squirrel Hill resident and interim director of Derekh and Youth Tefillah at the congregation, is set to become its associate rabbi on July 1.

Goodman’s professional journey hasn’t necessarily been linear. The soccer-loving rabbi (he hosts a weekly podcast, has a Substack newsletter and writes for Pittsburgh Soccer Now) came to Squirrel Hill in 2018 as a trailing spouse. His wife, Noa, is a physical therapist. The couple and their two children, Yigal and Etta, previously lived in Colorado, where Goodman served as the rabbi and director of Judaic studies at the Denver Jewish Day School between 2012 and 2017 and as rabbi at Congregation Har Mishpacha in Steamboat Springs from 2014 to 2018.

After arriving in Pittsburgh, while his wife completed an internship, he accepted various positions, including teacher (both online and in person) and rabbi of Brith Sholom in Erie. “I picked up a whole bunch of stuff to kind of pay the bills,” he said.

Following the departure of Rabbi Jeremy Markiz, Beth Shalom’s former director of Derekh and Youth Tefillah, Goodman took on those responsibilities on an interim basis, as Beth Shalom searched for “the assistant rabbi of their dreams,” he said.

Despite the search, the market didn’t comply.

When Beth Shalom was unable to find the ideal candidate, the congregation asked Goodman if he was interested in becoming its associate rabbi. There were aspects of the job that were particularly appealing — such as being able to continue teaching and working with youth — but before accepting the offer Goodman needed to make sure Beth Shalom leadership understood his prior commitment, he said.

Once a month, he travels to Erie to serve as Brith Sholom’s rabbi.

The Erie congregation is small and struggling and likely realizes “that I’m probably the last rabbi they’ll ever have,” Goodman said.

Beth Shalom’s board understood Brith Sholom’s pressures and Goodman’s desire to “keep them going as long as we possibly can,” he said. 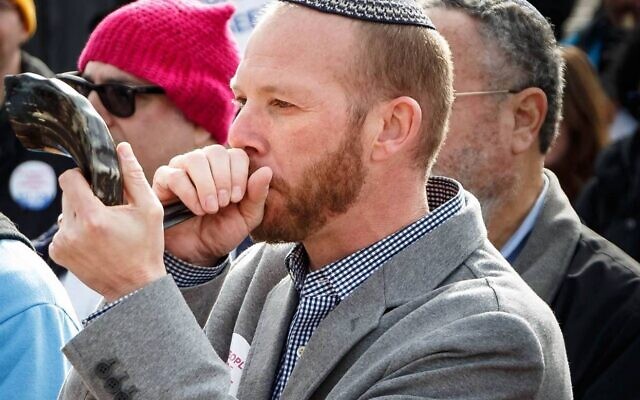 Goodman relies on diverse sources for his inspiration. Growing up in Los Angeles during the late 20th century, he developed a love of hip-hop music. These days, he mines the lyrics of Talib Kweli, Common and Run-DMC for meaning, while in the same breath or sermon he references the teachings of 18th- and 19th-century Hasidic masters, including Rabbis Mordechai Yosef Leiner of Izbica, Menachem Nachum of Chernobyl and Levi Yitzchok of Berditchev.

The rabbi is drawn to Hassidut, he said, and has spent years sharing its wisdom with others during morning drop-off at Community Day School, in afternoon classes at Beth Shalom, online while teaching parsha for My Jewish Learning and within the pages of a soon-to-be published book.

“Hassidut is very psycho-emotional and really personal,” Goodman said. “It talks about your feelings and your struggles.”

Within his own life, there have been periods of setback and disappointment, he continued, yet it’s through text that he’s managed to “get back on track.”

“Rabbi Goodman has developed strong bonds within the fabric of the congregation, and his love of rabbinic and Hasidic text, as well as his extensive experience, is evident in all of his work,” Adelson said. “We are fortunate to have him on board, and I am grateful to partner with him officially in serving the congregation.”

It doesn’t take a Talmudic sage to know that the work of the rabbinate can be arduous, thankless and frustrating at times. For Goodman, however, text, tradition, music and sports have helped him remain grounded and on a path leading to this moment. Judaism, he said, is a mechanism to “make you feel a little bit better, a little bit healthier and a little bit more balanced.” And he’s ready to share the lessons of his life to an ever-growing audience.