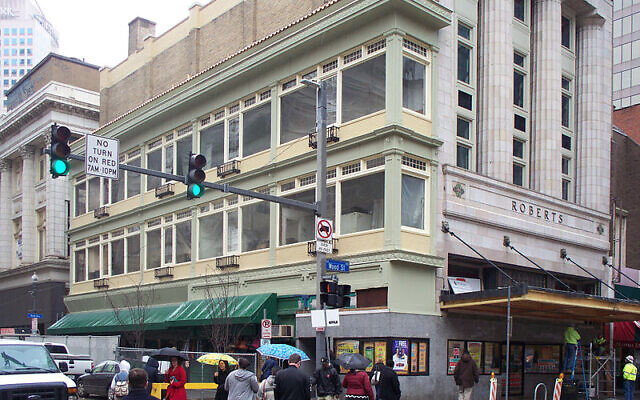 The upcoming sale of the historic Skinny Building downtown has sparked renewed interest in its Jewish ties.

Located at 241 Forbes Avenue, the Skinny Building was built by Louis Hendel, a Jewish produce merchant, who bought the oddly shaped property — it measures 6 feet by 80 feet — from Andrew Mellon in 1918 for $65,000. One of the narrowest commercial buildings in the world, the Skinny Building, also known as the Hendel building, came into the ownership of the Urban Redevelopment Authority in 2013. Now, it is poised to be sold by the URA to Home Town Real Estate LLC, an affiliate of PNC Bank, for $1.3 million.

Initially, Hendel used the space for outdoor fruit sales. Following complaints from local merchants that his business crowded the sidewalk and violated city ordinances, Hendel built the tiny skyscraper in 1926.

Mark Houser, a Leet Township resident and director of news and information at Robert Morris University, researched the Skinny Building’s history for a 2019 lecture with the Pittsburgh History & Landmarks Foundation, as well as a 2020 article in Pittsburgh Magazine. Houser discovered that after Hendel completed construction on the building, he leased the top two floors to Clarence Jefferson, a restaurateur.

“From what I read in newspapers from the time, that would have been the only restaurant in all of downtown where Black people could have a sit-down meal,” Houser said.

A 1928 Pittsburgh Courier article confirmed Houser’s statement and described the restaurant’s opening and Hendel’s support of Pittsburgh’s Black community: “Through his friendship with Mr. Jefferson and the desire to help the colored race, [Hendel] has leased this property, disregarding the bitter comments of the nearby white business men, in order that we might have a decent place to eat in the downtown section.”

The Courier went on to describe Hendel’s efforts to erect the Roosevelt Theatre, formerly located at 1862 Center Avenue, and said Hendel wanted Black people to enjoy seeing talent “in a theatre as good as any” without being subject to humiliation.

Hendel, as quoted in the Courier, explained his aim: “The Jew would be treated as the Negro if he had not had the money to make him independent as a race.”

In turn, the Courier called Hendel “a Jew, with a sympathetic understanding of the problems of our race,” and praised him as “a prominent friend of the Race.”

Although “Lincoln” — Jefferson’s restaurant in the Hendel building — was out of business by 1931, “Raywell’s,” a lunch counter, opened in 1938 and welcomed customers until 1979. 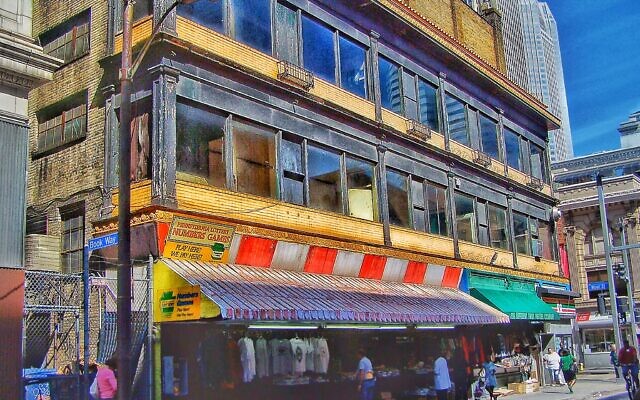 In addition to Hendel’s business ventures, he served as president of New Light Congregation — a biographical oddity given that the congregation was Romanian and Hendel “seems to have come from elsewhere in Europe,” Lidji said. Even so, Hendel’s various pursuits reflect a bygone era. “He was part of that generation of Hill District entrepreneurs who got into all sorts of ventures, always with interesting outcomes,” Lidji added.

It’s important, Houser said, that people remember that well before the Civil Rights movement swept the country, there was a “Pittsburgher who played a role in recognizing the dignity and humanity of Black people.”

Gloria Forouzan, a Lawrenceville resident who previously served as office manager in Mayor William Peduto’s office, said she’s concerned that the upcoming sale of the Skinny Building to PNC will cause this history to be lost.

“What do we have in this town to say, ‘Here’s what we did and here’s how we helped the city become what it is?’” Forouzan asked.

Pat Clark, a Bloomfield resident, provided public testimony at the URA’s Sept. 9 board meeting and later told the Chronicle that he, too, is concerned about preserving the Skinny Building’s history.

“The key thing for me is just making sure that they address and honor the level, the role, that the place played in Pittsburgh’s Black history, and that also they make sure that there’s demonstrable ways — in dollars and cents ways — that this project can show community equity and social investment return,” Clark said.

During the Sept. 9 board meeting, Adelaide Roddy, a URA project manager, said the URA is acting with preservation in mind.

The URA acquired the Skinny Building in 2013 in order to prevent the building from demolition, as well as to spur downtown growth, Roddy said. Now that PNC has been identified as a viable partner, she continued, the URA has found an entity “who’s not only interested in activating the space, but would like to preserve the building’s character.”

PNC, whose headquarters are near the Skinny and adjacent Roberts buildings, intends to use the property as flexible office space for its employees.

“We want to see the Roberts and Skinny buildings preserved in a tasteful way that respects both the city’s history and the buildings’ history, yet makes them pleasant, safe and productive places for our employees to come to work,” said Alyssa Sinicrope, vice president, real estate developer of PNC Realty Services, during the Sept. 9 meeting. PNC is passionate about “continuing to play an important role in rejuvenating the downtown area through urban renewal,” she added.

As part of the upcoming sale, PNC has agreed to work with an approved third-party preservationist, who will provide guidance on changes to the building.

Sam Williamson, chair of the URA, said the organization’s purpose is to “intervene in our economy, to achieve outcomes for the people of Pittsburgh that the free market on its own is not going to generate. One small example of that is when the URA intervened to acquire this building, and save it from the wrecking ball back in 2013. Another example is what we could do with the $1.3 million that PNC will be paying for these buildings.”

Proceeds from the upcoming transaction will be directed to equitable aims aligning with the URA’s mission, according to Williamson.

“There are all kinds of outcomes that we need to intervene on, from affordable housing to income equality, to occupational segregation, to the wealth gap — urgent needs which the free market on its own is clearly not meeting, and not able to meet,” he said. PJC