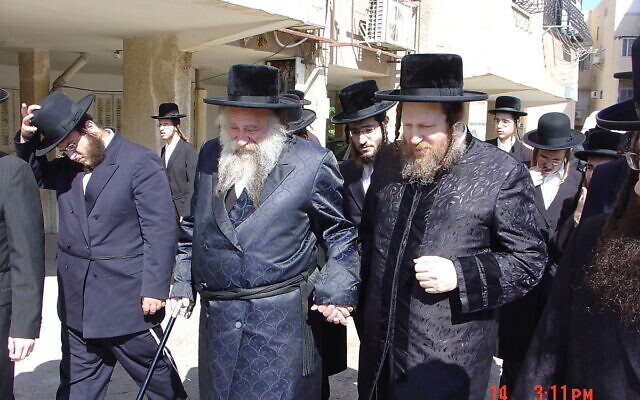 COVID-19 has claimed the life of a Chasidic Israeli rabbi who had roots here in Pittsburgh.

Rabbi Mordechai Leifer, the third rebbe in Pittsburgh’s Chasidic dynasty, and known as the “Pittsburgher Rebbe,” died Oct. 4 after a lengthy battle with the illness. He was 65.

Leifer’s funeral drew some 5,000 haredi followers in the crowded streets of the Israeli city of Ashdod, resulting in clashes between mourners and police who attempted to disperse them.

Leifer was an accomplished student of the Torah and a musical composer, friends and followers said. He led Pittsburgher Chasidim throughout Israel, in New York and in California.

Leifer’s grandfather, Yosef, came to the United States from Nadvorna in Eastern Europe in 1923, eventually settling in Pittsburgh’s Hill District, according to the Pittsburgh Post-Gazette. In the Hill District, he founded a mikvah and synagogue Kahal Chasidim.

Around the end of World War II, Yosef and his family moved to Squirrel Hill, where they started an Orthodox shul on Bartlett Street, Ahavas Israel. Yosef supported the opening of the first kosher grocery store in Squirrel Hill, Prime Kosher, and was influential in bringing kosher milk to Pittsburgh, the Post-Gazette reported.

“[Yosef] was very, very devoted and very soft-spoken,” said Balsam, a longtime Pittsburgher who recently moved to Toronto. “The home was open to everybody who needed a place to stay. He just carried over the tradition of the rebbe from Europe — I really have only fond memories of him.”

Yosef’s son, the second Pittsburgher rebbe, was Avram Abba, who took his place at the Bartlett Street shul when Yosef died. Mordechai Leifer only lived in Pittsburgh for a handful of years in the 1960s. But some in the community still remember “Moti” attending the Yeshiva Schools of Pittsburgh, where the recently deceased educator and spiritual leader Rabbi Ephraim Rosenblum served as his teacher.

Avram Abba made aliyah and left Pittsburgh for Israel around 1969 or 1970 and started the Ashdod community.

“People believed you went to a tzaddik like Yosef or Avram, even Mordechai, because they have a stronger spiritual connection to God than we do,” said Morty Milch of Squirrel Hill.

Milch, who davened at the Bartlett Street shul, visited Mordechai in Kiryat Pittsburgh, a neighborhood with a familiar name in Ashdod, Israel, about 15 years ago. By this time, the rabbi was commonly referred as the Pittsburgher Rebbe and oversaw a community with scores of Chasidic families.

Rabbi Mordechai Leifer, who became the third rebbe of the dynasty when his father died in 1990, grew the Chasidic Pittsburgher community in Ashdod from about 40 families in the late 1990s to about 200 this year. He has been succeeded by his son, Meshulam Eliezer Leifer. PJC