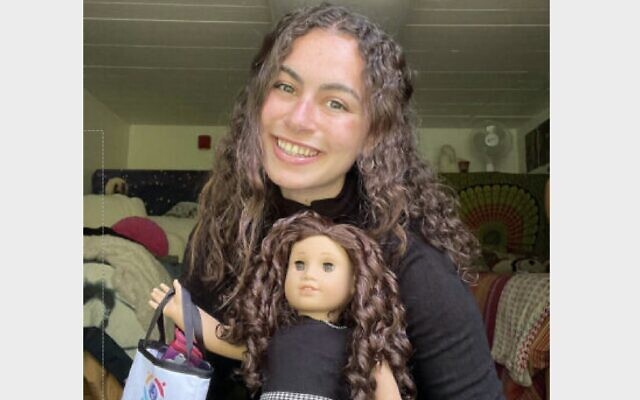 A Squirrel Hill-bred, 20-year-old, Jewish nonprofit leader has been named to Forbes’ prestigious 30-Under-30 list.

Peyton Klein, a Class of 2020 alumnus from Pittsburgh Allderdice High School now in her freshman year at Stanford University, was named to the magazine’s Education list.

This caps a year where Klein’s nonprofit, Global Minds, merged with the World Affairs Council and she was represented as a one-of-a-kind American Girl doll due to her advocacy and leadership.

“Klein, a student at Stanford, founded Global Minds Initiative as a 15-year-old high schooler in Pittsburgh in the after-math of the 2016 presidential election after witnessing discrimination against immigrant and refugee students at her school,” her Forbes’ 30-Under-30 profile reads. “It’s now a nonprofit with chapters in 25 schools that holds an after -school program matching English as a second language students with English-speaking students and organizes events to educate students about other cultures in an effort to combat intolerance. It has raised $1 million in donations and corporate grants and sponsorships.”

Klein is modest about her achievements, though passionate about the drive behind them.

While at Pittsburgh Allderdice, the former Community Day School student said she “was really dedicated to diversity and inclusion — and I wanted to see it in my community.”

Global Minds started as an effort to build bridges between English speakers and those speaking English as a second language, often new American immigrants or refugees.

“It’s all about humanizing interactions,” she said.

Earlier this year, Klein was highlighted in American Girl’s new “Making Herstory” series of young women making a difference in their community. Featured activists received their own lookalike dolls, appeared in a video and published a letter on the American Girl website telling their story.

The dolls are not available for sale.

Klein joined youth activists Edna Chavez, Yasmine Mabene and Naomi Wadler in celebration of American Girl’s World By Us launch of a diverse line of characters engaged in social justice.

“American Girl demonstrates that it’s possible for youth to use their voices and power to make an impact,” Klein said.

Klein had an American Girl doll when she was younger — Samantha — and told the Chronicle she “remembers … how exciting and meaningful that was to me.”

“It’s a great opportunity for young people to see it doesn’t mean changing the world, it means changing their community,” she said. Klein laughed at the suggestion that, as a child, she would have envisioned herself as the model for an American Girl doll. “I definitely dreamed — not this big,” Klein said. “It’s been really exciting to see something actualized. Having a doll is cool but what’s coolest is being a part of the narrative of the young girls across the country.”

The World Affairs Council of Pittsburgh and Global Minds announced their official merger in January 2021. Klein remains instrumental to the work of Global Minds, serving as a board member with the council and on its executive committee.

“Peyton is a perfect example of a youth leader who saw an issue in her community and took matters into her own hands to address it,” World Affairs Council of Pittsburgh President and CEO Betty Cruz said. “It’s been a pleasure working with her to create global learning opportunities for youth, and other young people can be inspired by her story to explore what issues matter to them in their own lives.” PJC