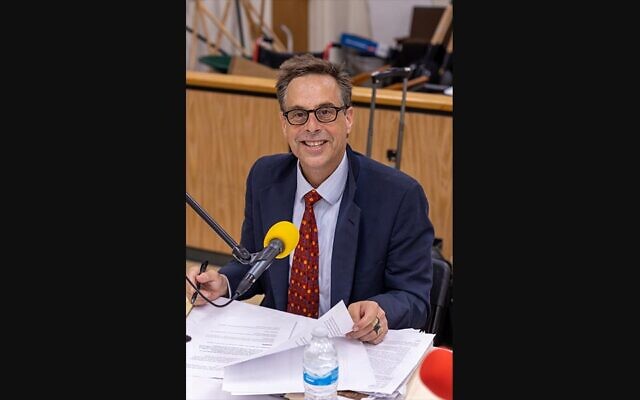 The former U.S. attorney for the Western District of Pennsylvania has been a frequent guest on CNN, Fox News and MSNBC, called upon to act as what he termed a “kind of swami, who knew everything” in 15-second sound bites.

But Litman felt those curated appearances didn’t allow him to tell the whole story.

“It was so little, I thought it really wasn’t capturing how people thought and how they decided things,” he told the Chronicle. “It was unsatisfying and felt incomplete for the listeners.”

That dissatisfaction was the genesis of “Talking Feds.”

The program, which he calls a general legal and political show, has hit a nerve. It currently has a 4.8 out of 5 rating on Apple Podcasts; close to 2,000 listeners have left a rating. It is also riding high atop several publications’ “must listen” lists, including Marie Claire’s “20 Best Political Podcasts to Prepare You for the 2020 Election.”

Litman grew up in the city’s Shadyside neighborhood. His parents, David and Roslyn, were lawyers. He remembers his mother as a pioneer who followed a path similar to Ruth Bader Ginsburg’s: an attorney and mother, married to a successful lawyer, who had difficulty finding a job after law school but by the 1970s became a nationally renowned litigator.

Litman left Pittsburgh to attend Harvard University and the University of California at Berkeley and spent time in New York before eventually taking a job in the Justice Department under President Bill Clinton. In addition to appearing as a guest on numerous cable news programs, Litman teaches constitutional law and national security at the UCLA School of Law and the University of California at San Diego department of political science. He is also the legal affairs columnist for the L.A. Times opinion page.

Despite his schedule, the husband and father of three finds time to record his weekly podcast, which recently uploaded its 100th episode, and to serve as the executive producer of a new female-fronted companion program, “Talking Feds: Women at the Table.”

The weekly format allows Litman to keep his podcast topical. Recent episodes have examined the COVID-19 diagnosis of President Donald Trump and first lady Melania Trump, the nomination of Judge Amy Coney Barrett to fill the Supreme Court vacancy and the effort to protect the right to vote leading up to the election.

“I feel like this is a product that doesn’t sound like a lot of others,” Litman said. “There are a lot of one-on-one’s or quick sound bites, but this type of roundtable is like some of the programs I grew up with, ‘The McLaughlin Group’ and other programs.”

And, while the guests all tend to approach subjects from the same side of the political spectrum, much of the acrimony heard on cable political shows isn’t present in “Talking Feds.”

“We aim to be educational and rule-of-law-driven, not snarky, not just the partisan show,” Litman said. “I have nothing against partisan shows on each side. But this is supposed to be more of an educational thing.”

Outside of an audio producer and intern, Litman does most of the heavy lifting for the program: He books the guests, writes questions and segments and hosts the podcast. He does use outside writers for a feature on the program titled “Sidebar,” a segment that examines the legal issues discussed in the podcast’s episodes. Rob Reiner, John Malkovich, Frances McDormand, Angelica Houston, Phillip Glass, Jane Lynch, Shawn Colvin and Pittsburgh Mayor Bill Peduto have all contributed their voices to the program.

“Talking Feds: Women at the Table,” which recently recorded its first episode, will be hosted by its own bevy of familiar figures, including former Department of Homeland Security Deputy Secretary Juliette Kayyem, former New Jersey Attorney General Anne Milgram and former Interim Dean of Berkeley Law (and frequently mentioned possible Supreme Court nominee in a Joe Biden administration) Melissa Murray. Litman said that the topics will be similar to those heard on his program but from a female perspective.

“When ‘women only’ get together, the conversation is a little bit different, in part because men aren’t interrupting them all the time, in part because they have special vantage points,” Litman said. “So, these are women talking about the same kind of current events, but it veers in different directions.”

Although he now calls California home, Litman does find time to return to the Steel City. He called his wife, Julie, “a nice Jewish girl from Pittsburgh who went to Allderdice High School.” Julie’s mother, Dodie Roskies, serves as director of JGenes Pittsburgh, a Jewish genetic education and screening program.

Litman said his trips home are bittersweet since the death of his mother in 2016. When visiting, he likes to explore the restaurants and other familiar haunts of his past, especially those in Oakland, Squirrel Hill and downtown, where he last lived. He said that he was devastated to hear of the closure of The Original Hotdog, which he referred to by its colloquial name, “The Dirty O.”

The Pittsburgh native focuses on creating a quality program, finding guests he considers valuable for his listeners, eschewing much of the digital marketing and analytical data utilized by many of the other podcasts topping many “must listen to” lists.

“We’ve been lucky,” he said. “I feel pretty lucky to have this almost-second career.” PJC