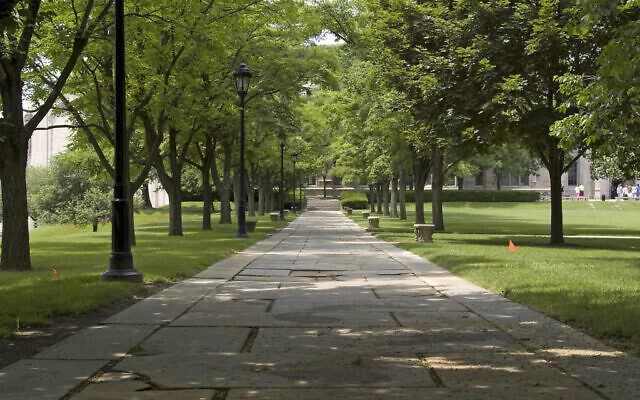 Varsity Walk at the University of Pittsburgh Photo by Christopher Lancaster, CC BY-SA 2.0 via Wikimedia Commons

At least one University of Pittsburgh student has alleged that visiting professor Vasili Rukhadze said that wearing a mask while lecturing was like being gassed at Auschwitz.

A university junior who goes by the Reddit handle Jsmooth123456 said that before the class began, Rukhadze complained about being forced to wear a mask, stating, it’s “like being gassed at Auschwitz.” The student said the comment was made earlier this month while the professor was teaching a politics of water course.

Jsmooth, who is Jewish — and who spoke on the condition of anonymity for fear of academic reprisal — said he was stunned and that other students in the class seemed to be taken aback by the professor’s comment.

“Nobody was sure how to react,” Jsmooth told the Chronicle. “He just kept going and just moved on with the lecture. I don’t think anybody felt comfortable.”

Jsmooth said he messaged the professor after class and that Rukhadze said he didn’t know what the student was talking about. After the email exchange, Jsmooth posted the following on Reddit: “As someone of jewish descent this made me like extremely uncomfortable so I sent him an email explaining this, but if this becomes an issue again I was wondering if there’s a way to take action against him through pitt.”

The post elicited more than 200 responses and numerous private messages, some of which said that other students had heard the professor make the alleged comment.

After posting on Reddit, Jsmooth contacted the department of political science’s chair, Jae-Jae Spoon, who told him the university would be speaking with Rukhadze.

Rukhadze sent an email apologizing to the students in the class and denying he compared mask-wearing to the Holocaust. It read in part, “I am reaching out to all of you regarding today’s class. I want to start with an apology to each one of you, if my humorous attempt in class today to complain about my mask blocking my air offended you in any way.

“I definitely did not compare and will never compare mask-wearing to the greatest genocide in human history, and I certainly did not intend any offense against any individual or any group of people. I am surprised and hurt about this whole incident. I have been teaching at US universities for years and never had any case of this nature.”

Rukhadze wrote in his email that his family members were killed during World War II by the Nazis while being forced to work as slave labor. He also wrote of his experience as an immigrant from the former Soviet Union and that he in no way opposes wearing masks, or vaccines.

After receiving the email, Jsmooth met with Spoon and another university staff member voicing his concern that the email did not acknowledge the actual statement Rukhadze made.

A second email from the professor was then sent to the class, which said, in part, “I want to reiterate my sincere apology for the joke that I said in class. It was wrong and it was tasteless. I am sincerely sorry for any offense or pain that it caused to anyone in class or outside of it. It absolutely does not reflect my character in any way. I am willing to discuss this matter further in class or with you individually.”

“The University is aware of a faculty member using inappropriate and offensive language during a class,” David Seldin, Pitt’s assistant vice chancellor of communications, wrote to the Chronicle. “The faculty member’s comments stand in direct opposition to our values and the appropriate offices have engaged with both the faculty member and students. As a university, we remain steadfastly committed to creating an inclusive environment that allows everyone to succeed and events like this underscore how important this work continues to be. We encourage the Pitt community to report incidents like these so the university can assess the situation and promptly respond.”

Kathleen Blee, dean of the Kenneth P. Dietrich School of Arts and Sciences, of which the political science department is a part, released a statement on the University’s website acknowledging an ongoing inquiry by the University.

“Recently one of our students alleged that a Dietrich School faculty member made anti-Semitic statements during a class,” Blee’s statement read in part. “This report is very concerning, and I assure you that we have taken several definitive steps to address the situation, including engaging the appropriate University offices to conduct a thorough inquiry of the incident — an inquiry that remains ongoing.”

Blee’s statement urged anyone traumatized by the incident to reach out to the university’s Office of Student Affairs and Office for Equity, Diversity and Inclusion and to report bias incidents to the school through Pitt Concern Connection.

In an email to the Chronicle, Rukhadze’s lawyer, David Kobylinski, said that “Dr. Rukhadze absolutely and unequivocally denies that he compared wearing a mask to being poisoned by gas at Auschwitz. Dr. Rukhadze is an Asian-American from the country of Georgia whose own family was persecuted and murdered by the Nazi regime during the Second World War. He has worked in academia for over two decades and never once, until last week, has an accusation like this ever been levied against him. He was stunned to the core of his being to hear of these false accusations.

“The young man who made these false statements appears to be a troubled individual who has a history of confronting Dr. Rukhadze at lectures,” the email from the professor’s attorney continued. “Of note, the young man most recently engaged Dr. Rukhadze during the class immediately prior to the class in which he now alleges Dr. Rukhadze made this statement. Dr. Rukhadze is concerned for this individual’s well being and encourages him to seek counseling.”

In a second email to this reporter, Rukhadze’s attorney said “the University is absolutely wrong to have stated what you claim. We are aware that the University has statements from students in the class who state they did not hear any reference to Auschwitz or the Holocaust.”

“If you proceed with defaming my client,” the email continued, “you and the Pittsburgh Jewish Chronicle will be named in a defamation suit that we are currently preparing against several entities.”

The alleged incident was first reported by The Pitt News, the school’s student-run newspaper, and was subsequently reported by several other media outlets.

Jsmooth said he is uncomfortable returning to the politics of water course and is instead working with the department to create a personalized course of study he can complete as an alternative. PJC