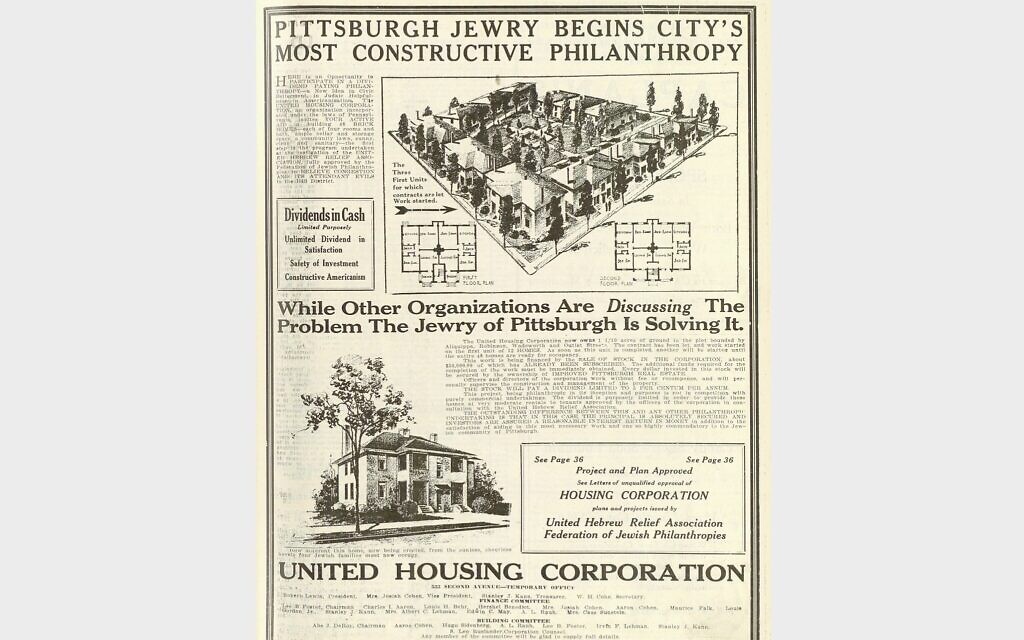 A full-page advertisement in the Jewish Criterion from April 1, 1921, announcing a proposed housing development in the Hill District. (Image courtesy of Pittsburgh Jewish Newspaper Project)

Directly across from Trees Hall is a small housing complex: six identical brick quadplexes filling the square made by Alequippa Street, Robinson Street and Wadsworth Street. These modest buildings were the first effort by the local Jewish community to address affordable housing — and perhaps the first such effort anywhere in Pittsburgh.

The project emerged in the early 20th century out of growing concerns with housing conditions in the Hill District. A survey in April 1916 by the United Hebrew Relief Association had found severe overcrowding, shoddy construction, poor sanitation and high rents. In charts accompanying the report, Pittsburgh — meaning the Hill District — was presented as the most crowded and expensive major city in the country.

The report acknowledged that many of the neighborhood’s problems lay beyond the reach of any single social services agency. In an age without public welfare, few other options existed. The deadlock had been spawning study after study — starting with the landmark Pittsburgh Survey in 1907 — but none ever seemed to lead to practical work.

And so the United Hebrew Relief Association tried something new. A committee led by Carrie Naumberg Cohen, Aaron Cohen and Robert Lewin chartered the United Housing Corporation in 1921. They raised about $120,000 in an initial stock offering and used the funds to buy an old mansion, which they renovated into three apartments.

From that initial base of funding, the corporation began building an apartment complex. Its original plan called for 12 units arranged in a square, surrounding a commons area of lawns, gardens and playgrounds. That first 12-unit development was intended merely as a pilot project for a new way of addressing housing problems.

The complex was designed and marketed as a Jewish project. Land was chosen for its proximity to Jewish amenities in the Hill. Early tenants were working-class Jewish families from the Hill. An early full-page ad in the Jewish Criterion read: “While other organizations are discussing the problem the Jewry of Pittsburgh is solving it.”

But the vision was broader than Jewish concerns.

Organizers claimed that their development was the first affordable housing project in Pittsburgh. Even if it is hyperbolic, the claim is notable: It shows that they never intended to stop with Jews helping Jews. They were using the emerging infrastructure of Jewish assistance to develop a model that might someday benefit the entire city.

The United Hebrew Relief Association — a direct predecessor of JFCS Pittsburgh — was the oldest Jewish charity in Western Pennsylvania, and it became the first and largest beneficiary of the new Federation of the Jewish Philanthropies of Pittsburgh in 1912. The arrival of the Federation model marked a shift in Jewish charitable activity, a move toward a more holistic and analytic approach to problems.

The novelty of the United Housing Corporation was its financial structure. It was neither a charity nor a business. It was “philanthropy on a paying basis.” Investors bought shares and earned annual dividends, capped at 5% to keep rents low.

Within a year, the corporation had issued its first dividend at 2.5%. But people must have been skeptical of the project, or at least apathetic to it, because by late 1923 the corporation was lamenting the lack of communal interest. “It is too bad that in the hustle and hurry of modern life the real work that the United Housing Corporation is doing has been more or less lost sight of,” the officers wrote in the Criterion that year.

Only three of the quadplexes had been built by summer. Another three were built over the following year, but the corporation struggled to find new investors. “Is there any great, kind-hearted humanitarian who will come forward to aid us in paying off this balance due upon the construction of the buildings?” the officers wrote in the Criterion.

Those 15 years saw the Hill District steadily empty of its Jewish population. They also saw the arrival of New Deal public housing projects, starting with the dedication of Terrace Village about a block away from the United Housing Corporation complex.

That may explain why the United Housing Corporation sold all six buildings to a real estate broker in early 1940 and formally dissolved the corporation later that year. It was an experiment born of a certain time and place, and both circumstances had changed. PJC