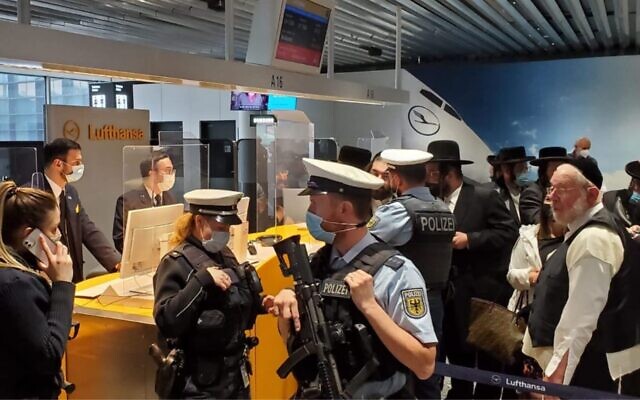 Jewish passengers were greeted by the police once they arrived in Frankfurt. (Courtesy)

(New York Jewish Week) — A group of Orthodox Jews are demanding an apology from Lufthansa airlines after they were expelled from a flight from New York to Budapest last Tuesday.

The travelers say all of the identifiably Orthodox Jews were prevented from boarding a connecting flight in Frankfurt, Germany because a group of passengers had allegedly not complied with the German national carrier’s mask regulations on the first leg of the flight.

In a video taken by a passenger, a Lufthansa supervisor is seen saying that “everyone has to pay for a couple,” adding, “It’s Jews coming from JFK. Jewish people who were the mess, who made the problems.”

The video, first reported and shared by the discount travel website Dan’s Deals, was posted to YouTube and Instagram where it sparked angry comparisons to the treatment of Jews during the Holocaust.

The video, blurred because it is illegal to record someone without their consent in Germany, was taken down for violating YouTube and Instagram’s hate speech policies. It is still available on Twitter.

YouTube just removed our video showing a Lufthansa supervisor blaming problems on #TheJews due to it “violating our hate speech policy”.

The passengers were also banned from purchasing another ticket to Budapest for 24 hours.

The Jewish travelers were on an annual pilgrimage to visit the grave of Rabbi Yeshayah Steiner, a wonder-working rabbi who died in 1925 and is buried in a village in northeast Hungary. According to Dan’s Deals, an estimated 135 to 170 Jews were on the flight, 80 percent of whom wore visible Hasidic clothing.

One passenger, Usher Schik, told the New York Jewish Week that he was sitting in the front of the plane. He said he didn’t notice people not wearing their masks, but acknowledged some passengers in the back of the plane might not have been complying.

“If you feel you have to punish individuals who didn’t comply, that’s fine,” Schik said. “But you can’t just punish an entire race just because we all look alike.” Schik said that there were multiple groups on the flight, and most people didn’t know each other.

“Most people were flying as individuals,” he said. “Some with family, and I was flying with my brother-in-law.”

According to a statement from Lufthansa, there was a larger group of passengers that “refused to wear the legally mandated mask (medical mask) on board.”

“For legal reasons, we cannot disclose the number of guests involved in the incident,” the statement, obtained by Dan’s Deals, said. “Lufthansa will continue to abide by all legal requirements, including the mask mandate imposed by the German government and those of the countries served. We do so without prejudice and with the wellbeing of all our guests.”

Schik said that when he arrived in Frankfurt from JFK, passengers on the flight were greeted by dozens of police officers waiting at the gate.

“We’re talking about some of them with big rifles,” Schik said. “We were really hurt and bothered by that.”

Schik said he wasn’t allowed to board the Budapest flight because he looked Jewish and dressed in Hasidic garb. “They pulled up my name and then once they saw me, they denied me because I’m Jewish,” he said. “That’s clearly profiling.”

According to Dan’s Deals, an individual named Max Weingarten was able to board the plane to Budapest because he was wearing a black polo shirt and didn’t look like a Hasidic Jew.

Weingarten, who traveled in first class, said that he wasn’t wearing a mask from JFK to Frankfurt, that nobody asked him to wear a mask and the flight attendant wasn’t masked.

Schik, too, said the captain left the gate “like it was a war zone.”

“He didn’t want to give anyone a chance to get people on the flight,” Schik said.

Schik added that an attendant at the gate told him that the order to ban Jews from the next flight came from the captain of the plane.

Schik added that he was “lucky” because he was able to rebook another flight to Budapest despite the 24-hour ban.

He said that while he was in Budapest, he spoke with other Jews who flew to Vienna and took a bus to Hungary after being ejected from the Lufthansa flight.

Schik said, at the minimum, Lufthansa should offer an apology and provide more information on what happened. “There are people who are responsible for this,” Schick. “It’s definitely antisemitism.”

Rabbi David Zwiebel of Agudath Israel of America wrote a letter to Lufthansa CEO Carsten Spohr on Monday that asked for the incident to be researched after hearing “disturbing accounts” about the flight.

“People were being punished simply because they shared ethnicity and religion with the alleged rule violators,” the letter said.

Lufthansa did not respond to the New York Jewish Week’s request for comment. PJC