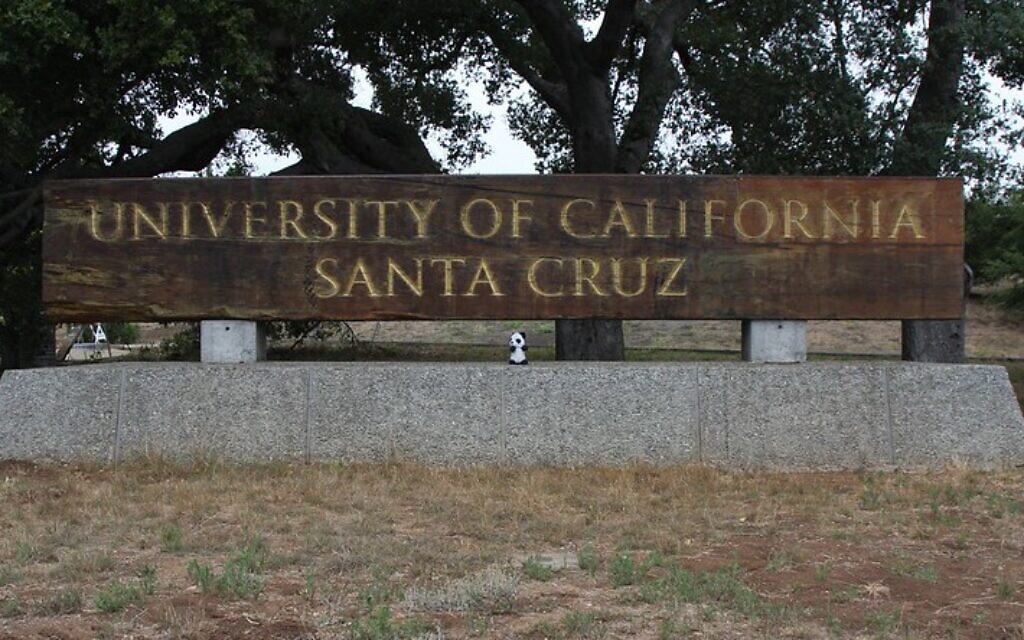 The University of California, Santa Cruz recently discussed the adoption of the IHRA's definition of antisemitism. Main Entrance photo by Michael Li, courtesy of flickr.com.

On one Tuesday night in February, a small group of Jewish students at UC Santa Cruz, where I serve as a shaliach (Israeli emissary) for the Jewish Agency for Israel, logged into the weekly Zoom meeting of the Student Union Assembly to support the adoption of a working definition of antisemitism.

The resolution referenced the definition written by the International Holocaust Remembrance Alliance, which has been endorsed by countless governments and organizations. The IHRA definition maintains that, among other things, a fair critique of Israel is acceptable, but denying Jews of the right to self-determination is an antisemitic act.

Immediately, opposition was voiced within the student government. “I will not support any resolution that includes the IHRA definition,” declared one of the voting members, arguing that it would silence Palestinian voices and interfere with advocating for Palestinian liberation. The proposal was tabled and sent to a subcommittee in charge of diversity and inclusion for review.

The resolution was endorsed by the Diversity Commission and presented again the following week. This time, it faced even stronger objection, backed by more students and multiple BDS activists from other universities. After several hours of heated debate over the motion, 13 members voted against it; nine abstained; and only three supported it — two of whom were Jewish. That’s 13 votes against defining antisemitism amid a rising tide of Jewish hatred across the country.

Student union associations don’t have actual power over the administration’s policies. So, why does it matter that 13 voting members are refusing to define antisemitism? Student governments set the tone on issues of interest to the student population and speak on behalf of their peers. Their statements and resolutions cultivate a certain campus culture, and often reflect statewide and even national trends that influence their counterparts in other schools.

As Jewish presence in those spaces is very limited, Jewish and pro-Israel students are fighting a losing battle. The 10-80-10 principle — arguing that roughly 80% of the people do not have a strong opinion on a given matter, 10% are against it and only 10% are proud advocates — doesn’t hold when it comes to Jews and Zionism. Years of heavily biased media coverage, coupled with carefully designed campaigns demonizing Israel, have misinformed an entire generation.

Student Union members who opposed or abstained during the vote did not necessarily do so out of deep hostility toward Jews. They did it out of fear. They didn’t want their names to be associated with supporting any form of perceived injustice. But they failed to recognize their lack of fact-based education about the Israeli-Palestinian conflict and its impact on our campus community.

Ten days later, on March 5, two colleges at UC Santa Cruz were defaced with antisemitic and anti-Black graffiti. Within hours, the university issued a statement condemning the incident. Several days later, driven by pressure from its Jewish members, the Student Union expressed its wholehearted solidarity with the Jewish and Black communities, committed to undergoing annual antisemitism training and urged the administration to take action.

Riding on momentum has its benefits, but it is not a long-term strategy. In the events that preceded the vandalism, Jewish students in this progressive-liberal school were told which sources they are allowed to quote from, what language they are allowed to use to define their identity, and what is and isn’t considered a crime against their people. No other ethnic group is faced with so much hypocrisy on a college campus.

What happens in college doesn’t stay in college. When students don’t feel safe expressing their Jewish identity, they learn to hide it. If students can’t talk openly about Israel, they learn to avoid it. Consequently, those who support the boycott of Israel in the name of disingenuous social justice dominate the space and even affect decisions in the corporate world, like the one made by Ben & Jerry’s ice cream company to end its operations in the West Bank and parts of Jerusalem.

If we don’t want other people speaking for us, we have to be in those spaces and speak up for ourselves.

Parents of college students need to understand the following: Their children don’t need to compromise their academics or devote too much time to this issue. They don’t have to run for student body president or another public office or even be interested in campus politics. In most cases, simply by regularly attending council meetings, students are granted voting power. Their mere presence can make a difference.

Much of the support expressed by UC Santa Cruz’s administration and the Student Union Assembly following the incident is a direct result of our students’ strong-willed fight to be heard and respected. I’m convinced that had we not had any representation in those spaces, the impact on our community wouldn’t have been recognized in the same elaborate and sincere manner as a call to action. Their ability to see the situation clearly, speak confidently and work with their peers collaboratively allowed them to stand up to antisemitism and persuade others to stand by their side.

As we approach the end of this academic year and the beginning of another, I encourage parents to think of the impact their children can make on this world simply by speaking up. Remind them of the importance of connecting with the Jewish community and being vocal about their identity. Every one of us has a voice, and every one of us deserves to be heard. pjc