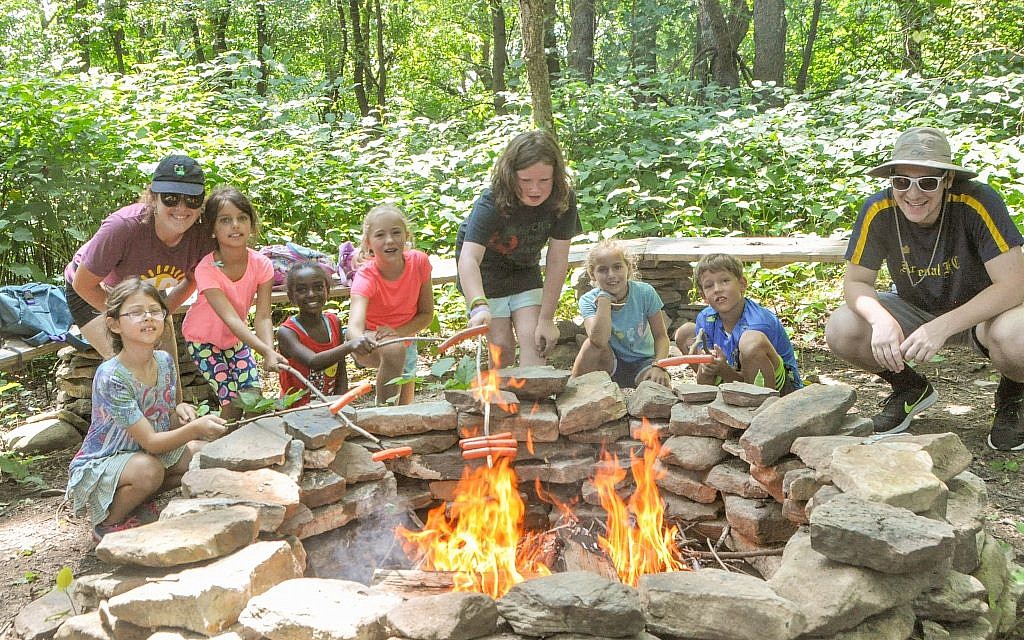 Campers at J&R in 2018. (Photo courtesy of Jewish Community Center of Greater Pittsburgh)

Sometimes when a torch is passed, it’s an actual flame handed off from runner to runner in a torch lighting ceremony. It’s thrilling to see the athlete sprint with confidence and purpose, torch thrust high. The next runner awaits, ready to take the flame forward. A quick handoff and the torch advances toward the next outstretched hand. We see the exhilaration on each runner’s face; we can only imagine the responsibility the runner feels to keep the flame moving ahead. Don’t drop the torch. Don’t fall. Don’t fail.

As the first of our grandchildren headed to Jewish overnight camp this week, a torch has passed to me. A torch whose warmth comes not from fire, but from memory. The torch was handed off to me by my parents and in-laws and the parents of so many dear friends, devoted grandparents who never missed the Jewish summer camp sendoff. They stood in the hot, crowded, chaotic synagogue parking lot, bestowing their grandkids with hugs, kisses, and words of encouragement. No matter how long it took to load the buses, they stayed. When the air brakes released with a huff and the buses at last lurched forward, they waved until the buses were out of sight.

Sure, some of that was simple devotion, the boundless love that connects grandparents and grandchildren. But these grandparents also understood the essential role Jewish overnight camp plays in building Jewish identity. Not only is camp joyful and fun, camp makes being Jewish joyful and fun. Something you’re proud to be. These camps create experiences that connect kids powerfully with Judaism, enabling them to embrace the heritage that is their birthright.

So, those grandparents showed their enthusiastic support with a big farewell. They wrote letters and sent care packages. On Visitors Day or Visitors Weekend, there they were again, lugging picnic baskets and stepping carefully over the uneven ground. They loved the vibrancy of Jewish life at camp, and they said so again and again. Some of these grandparents may have helped pay for camp, too. Their support, in ways large and small, delivered two powerful messages to their grandchildren: You matter. And this matters.

With a few exceptions, those beloved elders have passed from the scene. But their example remains.

It’s the example I’ve had in mind this week, as the next generation of our family heads to Jewish overnight camp. Now, it’s my turn, our turn, to carry the torch forward.

It’s also making me think broadly about the ways a Jewish community shows all its children: You matter. And this matters. Jewish summer camp is a big-ticket item. Scholarship funds will always be needed.

That’s how I was able to go to Jewish summer camp so long ago. The cost was a fraction of the cost today, but it was still totally out of reach for my blue-collar parents. Thanks to the generosity of someone I never knew, maybe someone else’s grandparents, I was able to go. Twice. It changed my life forever.

Years ago, I established a modest camp scholarship fund at our Jewish Federation in memory of my parents. The parents who needed a helping hand to get me to camp are benefactors for other children now. I always ask the scholarship coordinators to convey a parallel message to the recipients: Sometimes one who needs a boost today will be in a position later to help someone else. There are many ways to be a “grandparent.”

It’s time to dash off a message to my little campers. No more “snail mail”; now the camp prints out email messages and delivers them to the kids.

Times change, but one thing never will: The sound of the air brakes releasing, and the lurch of the buses moving ahead will always fill my eyes with tears. It’s the poignant sound of time passing; one generation departs, another steps up in its place, and the children, the sweet children, move ever forward. PJC

Sally Abrams co-directs the Speakers Bureau of the Jewish Community Relations Council of Minnesota and the Dakotas. This piece first appeared on The Times of Israel.