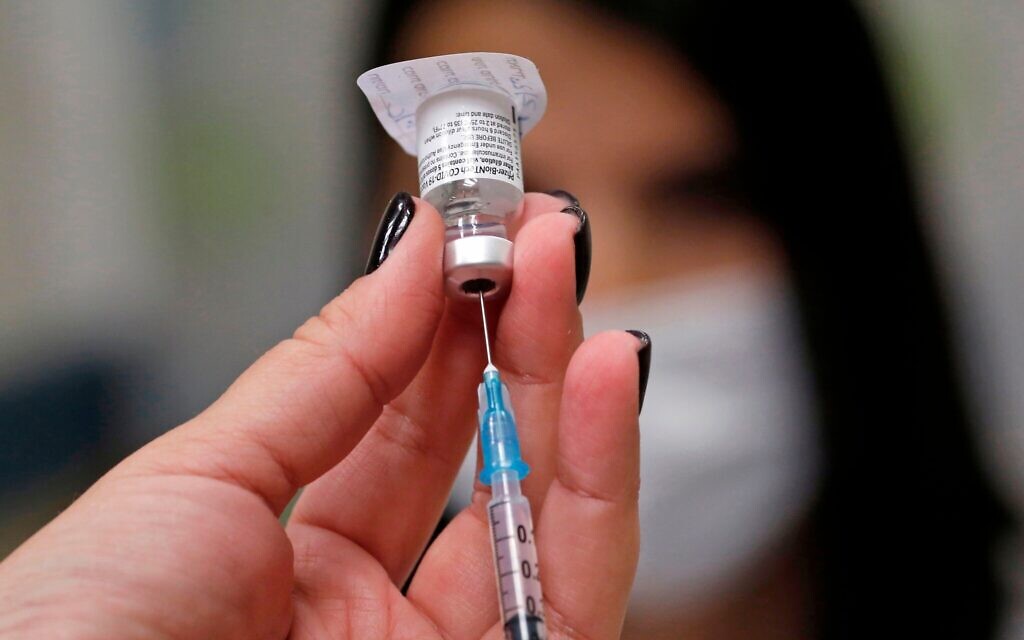 A medical worker prepares a coronavirus vaccine at Barzilai Medical Center in the Israeli city of Ashkelon, Dec. 20, 2020. (Photo by Gil Cohen-Magen/AFP via Getty Images/JTA)

Next week Israel will celebrate its 73rd year of independence as a Jewish and democratic state, and its accomplishments are astounding and cause for tremendous pride.

This year’s Yom Ha’atzmaut (Independence Day) celebrations in Israel will look very different than they did last year during Israel’s first national lockdown in response to the COVID-19 pandemic. Celebrations were held over Zoom and Israelis watched the annual torch-lighting ceremony from their homes.

What a difference a year makes. In 2021, Yom Ha’atzmaut celebrations in Israel will take place in person all over the country. This is no small feat and was made possible due to Israel’s lightning-pace vaccination rollout. As of this writing, more than 60% of the population has been fully vaccinated. Israel’s centralized government and efficient national health care system made this expedited vaccination rollout program possible.

Controlling the pandemic and preventing the introduction of new variants into Israel led to the closure of Ben Gurion Airport to non-citizens since March 2020, and to nearly everybody for six weeks in early January and February 2021. This closure, however, did not stop aliyah to Israel. In 2020, over 21,000 Jews from around the world immigrated to Israel. While these numbers were smaller than in 2019, they are remarkable nonetheless given that the entire world was largely in lockdown throughout most of 2020.

During the historic closure of Ben Gurion, the aliyah of Ethiopian Jews as part of “Operation Tzur Yisrael” continued, with multiple flights of new immigrants landing at an otherwise closed airport during Israel’s third lockdown. While Israel closed itself off from the rest of the world, it kept its doors open to Jews seeking to make Israel their home, a testament to Israel’s role as home and haven to the Jewish people. The Jewish Agency for Israel, supported by the Jewish Federation of Greater Pittsburgh, plays a crucial role in bringing Jews from all over the world to Israel and in absorbing them into Israeli culture and society.

Jews from around the globe have been making aliyah to the land of Israel long before the establishment of the State of Israel. Today, Israeli Jews hail from more than 70 countries, making it literally and figuratively the “ingathering of the exiles.” Jews in Israel come from Ethiopia, Algeria, Iraq, Iran, Afghanistan, Syria, Lebanon, Egypt, Morocco, Tunisia, India, China, countries that were previously part of the former Soviet Union and others.

There is no typical look or color for Israelis, and each person’s history and culture enriches Israeli society. As Passover came to an end less than a week ago, Israelis from all different backgrounds attended a “mimouna,” a traditional Moroccan ceremony marking the end of Passover by serving muletas, or doughy pancakes. The ceremony has been widely adopted by Israelis of all different origins, a testament to Israel’s diversity and openness to different Jewish traditions and cultures. Similarly, the Sigd holiday, observed by Ethiopian Jews 50 days after Yom Kippur to mark the acceptance of the Torah and the return to Jerusalem, was declared an official Israeli holiday more than a decade ago, thereby establishing the celebration as common national heritage.

In this spirit of celebrating diversity, the Jewish Federation of Greater Pittsburgh will be hosting multiple virtual programs to honor Yom Ha’atzmaut and the diverse backgrounds of Israelis (See “Varied” on page 2 for more information), including the following programs: a virtual event with renowned photographer Erez Kaganovitz and his “Humans of Israel” exhibit, at which he will showcase the diverse faces of Israel to tell Israel’s story; a virtual stand-up comedy show with Benji Lovitt, an immigrant to Israel who will provide hilarious commentary of Israeli culture and society; a virtual cooking class with a local chef from Misgav, Pittsburgh’s Partnership2Gether region, who will teach how to make traditional food from the Galilee; and a virtual story session, at which a local Israeli will share “Yerus Goes to Jerusalem,” a beautiful tale about how a young Ethiopian girl makes the treacherous journey to Sudan and then to Israel. PJC

Kim Salzman is the Israel and overseas director at the Jewish Federation of Greater Pittsburgh. She lives in Misgav, Israel, with her husband and three children.