Hannah (left) and Sara Loffman baking challah for the Challah Back Girls project. Photo via Times of Israel

As the dual crises of COVID-19 and racial violence continue to grip the nation, the Loffman sisters’ need to knead never felt more urgent.

Meet Sara, 27; Marni, 24; Hannah, 22; and Eliana, 16, otherwise known as the Challah Back Girls, a literal sisterhood that nourishes souls and stomachs across America one braided loaf at a time.

“When we talk about what’s going on with our peers and family, we realized we could use what we have to make a difference — and what we have are ingredients and strong Jewish roots,” Hannah said. “It’s been ingrained in us to greet people with warmth and humanity, to give back and repair the world.”

Their story starts this past March when businesses and schools shuttered their doors in the face of COVID-19. For the first time in years the sisters found themselves all living together under one roof. 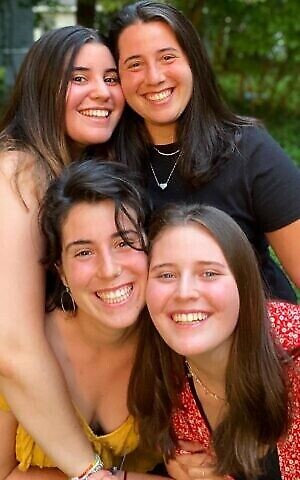 Clockwise from top right: Sara, Hannah, Eliana and Marni Loffman are the Challah Back Girls, baking for social justice and racial unity. Photo via Times of Israel
“We all had very different lives doing very different things. We had a lot of independence and then we were home. We are blessed to have a beautiful sister dynamic,” said Hannah, who is pursuing a master’s degree in social work at Rutgers University.

As virus cases skyrocketed, they found refuge in cracking eggs and sifting flour. Baking, something they’ve always enjoyed, alleviated the stress of life in quarantine. But it soon morphed into something more.

The four sisters knew many front-line health care workers and first responders, and were eager to lift their spirits. So, when their mother suggested they bring challahs to a potluck for local volunteer ambulance corps they rose to the occasion.

Choosing challah as a contribution was easy. Ever since they were young, they’d made their own challah for Shabbat, following their mother Caryn’s recipe. In no time they found themselves baking and giving challahs away.

“As the pandemic evolved and progressed, we soon found ourselves making double and triple the quantities. It was the beginning of giving back,” Hannah said.

The sisters, masked and gloved, gather in the kosher family kitchen to bake using nut-free ingredients and pareve equipment, a kosher dietary term meaning that the utensils are used for neither milk nor meat.

Meanwhile, the pandemic raged on and racial violence increased. On March 13 police killed Breonna Taylor in her Louisiana home, two white men killed Ahmaud Arbery while he jogged in Georgia, and then on May 25, Minneapolis police killed George Floyd. 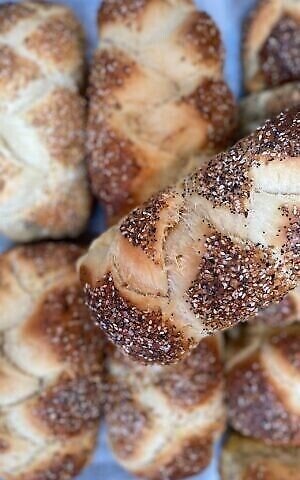 The sisters’ Everything But the Bagel challah. Photo via Times of Israel
Days after they marched in a local protest against Floyd’s killing and in support of the Black Lives Matter movement, they launched Challah Back Girls as a means to spotlight social justice organizations.

“We never sat down and formally said ‘This is what we want to do.’ We were baking and selling challahs but we didn’t want to make money from it,” Marni said.

They decided they could donate to established organizations that were doing anti-racist work or outreach in various communities. Each month, the sisters bake, sell and deliver challahs nationwide. A portion of the proceeds goes to different social justice groups.

“It’s not about solving all of these problems, but it has become a sweet and loving testament to building community,” Marni said.

Among the recipients are the Okra Project, which helps Black transgender chefs prepare healthy home-cooked meals for fellow Black transgender people suffering from food insecurity, and Everyone Home DC, which provides housing solutions and support services to homeless or at-risk families. 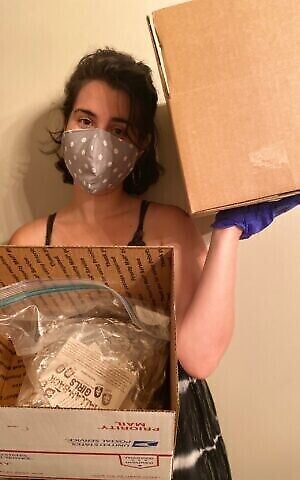 Marni Loffman packages challahs for a delivery. Photo via Times of Israel
The sisters have supported The Steve Fund, which works to build understanding and assistance for the mental and emotional health of young people of color, and also the Color of Autism Foundation, which helps Black families with autistic children.

“A big piece of the project for us is learning and educating ourselves about the different work being done. Each organization we’ve donated to has a similar underlying goal and vision for enacting reform,” said Sara, who until lockdown measures were implemented had been living in New York City.

Because they don’t always hear back from the organizations, the sisters were surprised and delighted when Banner not only messaged them directly on Instagram but also posted videos on Twitter of himself trying the coffee crumb and plain flavors.

“We were so excited, we follow him as fans,” Hannah said before sipping water from a cup emblazoned with the Steelers’ logo.

Banner appears to favor the coffee crumb, something he has in common with Sara. Hannah, who used to prefer the coffee crumb, is now partial to Everything But the Bagel, as is Marni. The chocolate chip challah remains Eliana’s favorite.

The Loffman sisters’ chocolate chip challah, which they produce as the Challah Back Girls, donating proceeds to charities that support racial justice and people in need. 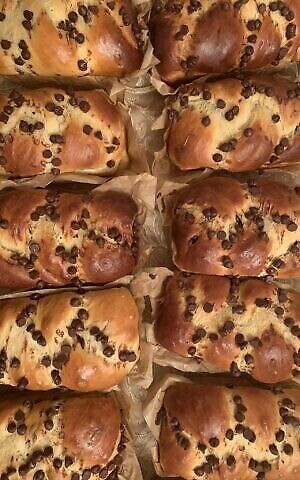 The Loffman sisters’ chocolate chip challah. Photo via Times of Israel
As the conversation wound down and the sisters got ready to head out on challah runs — they would spend the next two hours delivering their wares in Teaneck and neighboring Bergen County — they reflected on what they’ve accomplished.

“None of us needs to pat ourselves on the back or to think we’re doing something revolutionary. It’s not about solving the issues, it’s about building community between Black Lives Matter and Jewish communities,” Marni said.

The four also agreed they need to take some time to refresh and think about what’s next for the Challah Back Girls.

For the past few weeks the Challah Back Girls only took orders for delivery in Teaneck and Bergen County, but then opened orders again more widely for Rosh Hashanah.

Meanwhile, they continue to look for ways to stay involved in social justice issues.

“There’s a quote from Pirkei Avot, Ethics of Our Fathers, that says it perfectly: ‘You are not obligated to complete the work, but neither are you free to desist from it,’” Hannah said. PJC