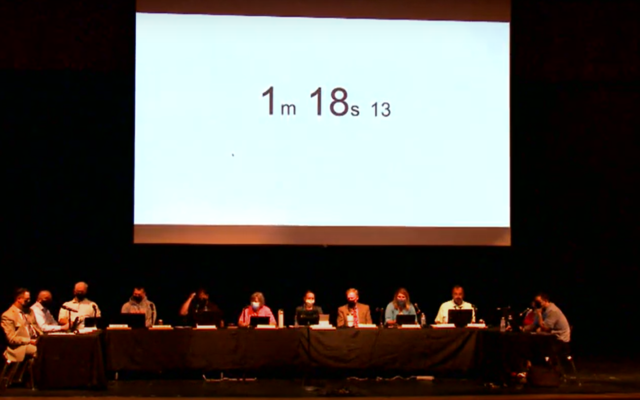 An attendee at a recent Bethel Park school board meeting made a reference to Nazis. Screenshot by David Rullo

Another school board meeting, another Nazi reference.

During a school board meeting on Monday, Aug. 23, the Bethel Park School District voted 7-2 to require all students, faculty, staff and visitors to wear masks inside district buildings.

The vote reversed a previous 7-1 vote that decided masks would be recommended but not required.

According to a report in the Pittsburgh Post-Gazette, during an outburst following the vote, one attendee yelled “Dobos and her Nazis are out.” Pamela Dobos is the school board president.

The Nazi reference is the third such event during recent school board meetings in Western Pennsylvania.

At successive Fox Chapel Area School Board meetings earlier this month, false equivalencies were made to 1938 Germany and Joseph Mengele. A Nazi salute was also made by an attendee at one of the Fox Chapel meetings.

Nazi analogies to COVID restrictions have been made nationally as well. On Aug. 23, House Republican Rep. Randy Weber of Texas compared Nancy Pelosi to the Gestapo.

“I call her Gestapelosi,” he said. “Gestapelosi has decreed that members must wear masks or get fined.”

Speaking about the Fox Chapel incidents, the director of the Community Relations Council of the Jewish Federation of Greater Pittsburgh, Laura Cherner, said these types of comparisons normalize antisemitic behavior and are a form of Holocaust denial.
“If you truly understand the gravity of the Holocaust and its lasting impact on the Jewish community and our families, you would not so flippantly use Nazi symbols or Heil Hitler. It’s deeply offensive,” she said.

“This is the opposite of the Holocaust,” she said. “We’re talking about a public health crisis and trying to address it in a way that works. The Holocaust is about killing people. This is saving people.” PJC