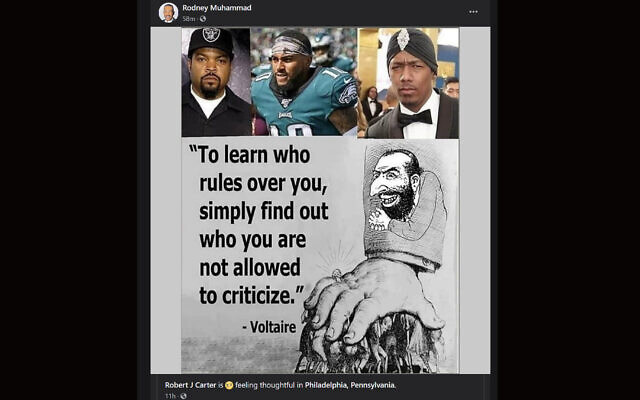 This post by the head of Philadelphia's NAACP chapter sparked calls for his resignation. (JTA/Facebook)

NAACP local chapter President Minister Rodney Muhammad – and the remainder of the chapter leadership – will be replaced next month after its executive committee voted to dissolve itself and allow the national office to assume full leadership, the Philadelphia Tribune reported.

Muhammad created an uproar in July when he posted a since-removed anti-Semitic meme on his public Facebook page.

In a statement, the national NAACP said it “will appoint an administrator for the Philadelphia branch to assume overall responsibility for the operation of the branch, its committees and staff, as well as shepherd a transparent transition to new leadership.”

Muhammad, 68, is a prominent civil rights figure and Nation of Islam leader with ties to the Nation of Islam’s Muhammad Mosque 12 on North Broad Street. He had been local chapter president since 2014, according to The Philadelphia Inquirer.

Jewish Federation of Greater Philadelphia said Aug. 2 that it would not work with the local NAACP as long as Muhammad was still its president. But Chief Operating Officer Steve Rosenberg told the Inquirer Wednesday that he was grateful for the organization’s action.

“We look forward to working with the NAACP to forge closer bonds with our two communities to address systemic racism and bigotry of all kinds,” he said.

“While the last few weeks have certainly been challenging, we have been inspired by the support of our friends and allies of all backgrounds and beliefs who came together to condemn hate,” ADL Philadelphia Regional Director Shira Goodman said. “We thank the elected officials, faith leaders, civil rights partners and community members who demonstrated moral leadership and courage in rejecting Mr. Muhammad’s antisemitic post.”

The meme Muhammad posted included a caricature frequently used by white supremacists called “the Happy Merchant,” depicting a hook-nosed man in a yarmulke rubbing his hands together. The offensive caricature was posted alongside photos of Ice Cube, the Philadelphia Eagles’ DeSean Jackson and Nick Cannon, who all recently posted anti-Semitic comments on social media. Beneath their photos, there was a quote — “To learn who rules over you, simply find out who you are not allowed to criticize” — misattributed to French philosopher Voltaire.

Muhammad has made two statements after the post appeared. The first, on July 27 said the NAACP condemns anti-Semitism, but he was criticized for not including an apology. A second statement three days later was more apologetic. PJC

This is a developing story. This piece originally appeared in the Jewish Exponent, an affiliated publication to the Pittsburgh Jewish Chronicle.