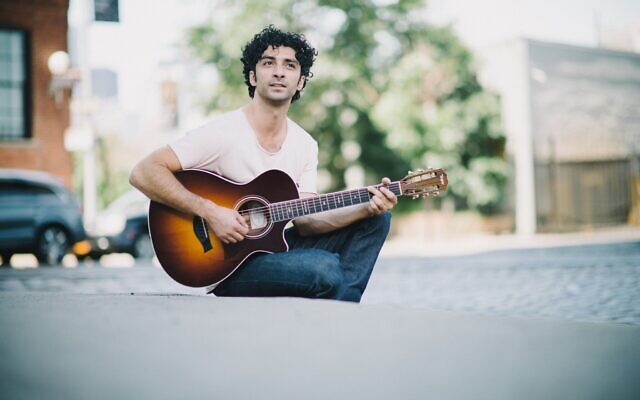 An upcoming concert hosted by Temple Ohav Shalom will not only offer the whole community a chance to come together to hear Jewish musicians, but will also celebrate 50 years since the founding of the Allison Park congregation.

“Let There Be Love,” which will be held virtually on Saturday, March 20, features a performance by experimental musician Noah Aronson. The event, which begins at 7 p.m., will also include a Havdalah service, a raffle and a silent auction, all of which are open to the entire Pittsburgh Jewish community.

“When we first had the concept for the concert, we wanted to include the broader Jewish community in Pittsburgh,” said Shara Taylor, an organizer of the event. “We don’t just want to celebrate our shul, we want to celebrate the support of the whole community. We all exist on each other’s shoulders, and it’s important to continue to have that cohesiveness, and that breadth and depth of tradition here.”

Ohav Shalom’s 50th anniversary was actually in December 2019. The celebrations were truncated by the start of the pandemic in March, so the congregation is extending its anniversary festivities for an extra year.

One way the members are honoring their synagogue is by bringing back some familiar faces for the concert. Pittsburgher Sara Stock Mayo and former Pittsburgher Rabbi Amanda Russell will lead the warm-up band and the Havdalah service, respectively. Mayo, an educator and activist who co-leads Kesher Pittsburgh, has previously worked at both Temple Sinai and Temple Ohav Shalom. Russell worked at Ohav Shalom and Congregation Beth Shalom before moving west to serve as a rabbi for Congregation Beth Sholom in San Francisco.

“Amanda is an amazing voice and an amazing spiritual presence, and we’re really glad that the virtual nature of the concert allows her to join us,” Taylor said.

This online experience means that Aronson, the main attraction of the night, will also get to join from the comfort of his own home in New York City. While Aronson has never been to Pittsburgh, the Pittsburgh Jewish community has been impacted by his music.

“Bringing in Noah was a no-brainer, since we were already using his version of ‘Barchu’ from his ‘Am I Awake’ album in our weekly services, and his song ‘Let There Be Love’ during our High Holy Days services,” Taylor said. “Our congregation is all about participation through music, and his music is very accessible.”

Aronson, who describes his sound as “honest and authentic,” has been inspired by the Jewish spaces in which he performs, he said.

“My music is influenced by everything and everyone around me,” Aronson told the Chronicle. “Every piece of music I’ve heard in my life has seeped into what I create, and my music is very much a product of what I’ve received. My father was a cantor, so I’ve always had the sound of the synagogue in me.”

While his music often is derived from Jewish scripture, Aronson has also dabbled in electronic dance music, and says his next album will be entirely based off of vocal loops. In 2019, he created “The Movement Movement,” for which he composed EDM tracks to inspire movement and dance in prayer services.

“Growing up, I had to daven every day, and the kinesthetic moments of prayer always resonated with me the most,” said Aronson, who serves on the faculty of Hebrew Union College – Jewish Institute of Religion’s Debbie Friedman School of Sacred Music in Manhattan. “Intentional movement within a spiritual practice is increasingly essential for me. It allows people to be more expressive in the fullness of their experience, and it expands the possibility of prayer.”

As for performing virtually during the pandemic, Aronson said he’s actually been able to find more blessings than he expected.

“There’s an intimacy to a Zoom performance that might not be possible on a stage or a bimah,” he said. “It’s more like one-on-one-on-one rather than just a sea of people, and I always try to connect with people on that personal level.”

That intimate connection is what Aronson will be striving for at the “Let There Be Love” concert.

“I try to be present in every moment, whether I’m performing for five or 500 people,” he said. “l always have the same intention and am grateful just to be in that moment with the audience, because it’s all beautiful. I’m so looking forward to it.”

More information about the “Let There Be Love” community concert can be found at templeohavshalom.org. PJC