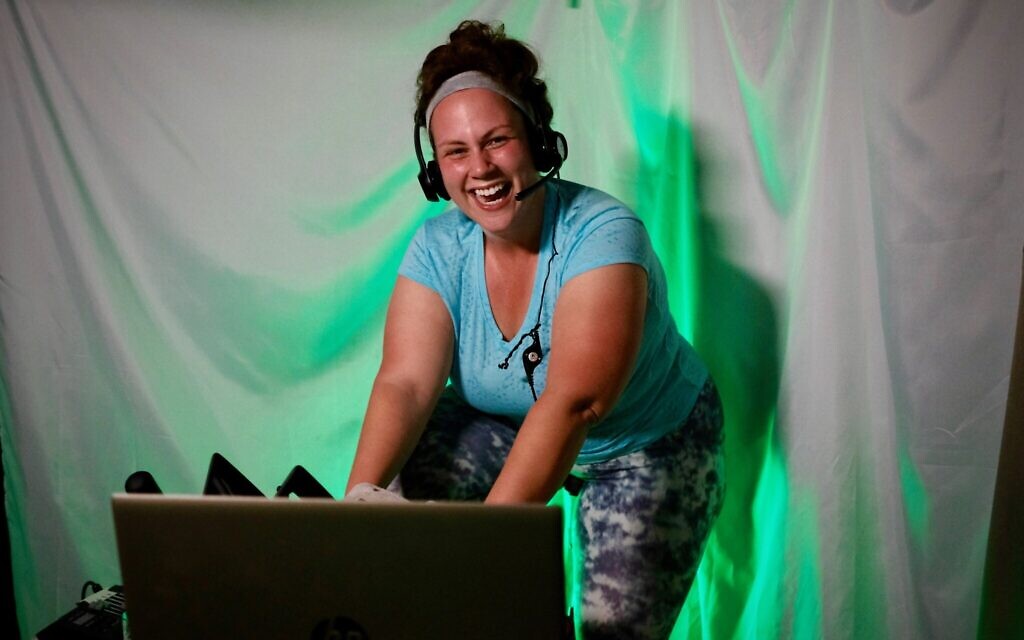 COVID-19 handed Alicia Danenberg lemons. She, in turn, made lemonade.

Last spring, the Shadyside gym where Danenberg taught spin classes closed. What she did next, she said, “was very intentional.”

“When COVID-19 hit, everything closed,” said Danenberg, a former Chatham University staffer who works remotely for the American Camp Association. “So, I just kind of decided I was going to be doing it on my own — and reach out to all those people who were buying bikes for their homes.”

She held her first virtual “Alicia’s Basement Party” last June in her Greenfield home for those looking to exercise, socialize or just blow off some pandemic steam on their bikes, on their feet or on their treadmills. Today, dozens attend the online sessions several nights each week, some from as far as Buffalo and Chicago.

“Even when only two or three or six people come out, that is still a success,” Danenberg said, noting that it’s just as important as the larger classes.

Danenberg has adopted a flexible “pay what you can, when you can” model, and gives a portion of her monthly proceeds to local charitable organizations, including Chatham University’s day camp program, Tree of Life Congregation in Squirrel Hill — where her family is affiliated — and the Boys & Girls Clubs.

April’s beneficiary is Friendship Circle, Danenberg said. Officials from that organization were grateful for the donation.

“It was very kind of her to think of us,” said Rabbi Mordy Rudolph, executive director of Friendship Circle. “Given the current environment, it’s especially appreciated. Sustainability is important [and] just knowing that Friendship Circle is something that comes up on people’s minds, philanthropically, means a lot.”

Despite the praise from her beneficiaries, Danenberg is modest and said her intention is simply to build a sense of community for those who attend her basement sessions.

“I’m just grateful to the people who choose to ride with me,” she said.

One of those riders is Karen Oosterhous, an education advocate from Squirrel Hill who took spin classes with Danenberg at the now-closed Shadyside gym. Attending “Alicia’s Basement Party” was a no-brainer.

“When, obviously, COVID-19 happened, the studio and life as we know it shut down and Alicia really took that as a challenge in a way a lot of people didn’t,” Oosterhous told the Chronicle.

She also praised the sense of community that Danenberg has created.

“She’s bringing together, on any night, dozens of people who normally wouldn’t be in the same community,” Oosterhous said. “It really has attracted people who want to be part of an active athletic community, and who want to spin.”

There is a science to Danenberg’s set-up. Her partner, Travis, works in film and helped her assemble proper lighting, backdrops and microphones to maximize the workout effect of the basement space.

“I really like her song choices,” Hartnett said. “We both understand how playlists can really change your motivations in a class, your feelings. Her music is always super upbeat and inspiring — it keeps you going.”

Danenberg is no stoic task-master, though, Hartnett said.

Danenberg laughs about her choice of settings — next to the TV, which is set on top of her washing machine in her basement, “the only place in the house I could play loud music.”

And when COVID-19 is finally behind us, Danenberg said she plans to continue the virtual spin classes.

“There’s a wide range of ages — and all body types are welcomed in the basement,” Danenberg said. “So many people have pushed us ahead, saying ‘I want to keep going.’” PJC