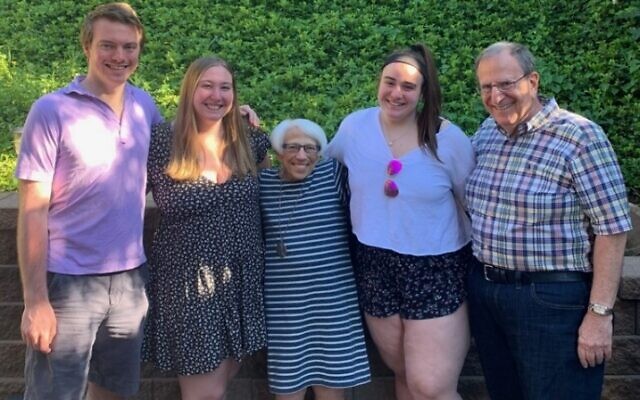 Elaine Krasik, a Pittsburgher dedicated to tradition, family and the Jewish community, died Aug. 18. She was 76.

Throughout her life, Elaine loved to learn.

As a young girl, she studied the Torah and Hebrew alongside her brothers, an uncommon — but, in her parents’ eyes, necessary — thing for a young woman in the 1950s, and became a bat mitzvah at Congregation Beth Shalom in 1957. In her 40s, years after graduating with a master’s degree from Yale and teaching French in Lexington, Massachusetts, she started a career in Pittsburgh in law, hustling to learn the ins and outs of the job among peers half her age. And, in retirement, she embraced educational classes on all things related to Jewish life.

“She loved to learn and she loved to know things,” said her son, Curt Krasik, an attorney who lives in Shadyside. “She was always studying — she worked at that very hard.”

Elaine’s passion for Jewish education and community led her to host non-Jews at her Squirrel Hill home for Passover seders for the better part of 30 years. Her guests occasionally posed questions about the rituals and traditions; she’d take those questions straight to her rabbi.

Elaine and her husband, Carl Krasik, an attorney, met in the seventh grade at Taylor Allderdice Junior High School and went on a bowling date about a year later. She won the match and the two didn’t date again for two years. The second time, at a high school fraternity dance in Swisshelm Park on Jan. 29, 1960, things stuck. The couple later married, and were together for more than 50 years.

Elaine was always passionate about attending services at Beth Shalom, her husband said.

“Her parents had belonged to Beth Shalom and she literally grew up there,” Carl said. “She loved the institution.”

She also found deep satisfaction in giving back to the Jewish community, becoming, in the words of her husband, “a professional volunteer.”

“She did a lot of volunteering work in the late ’70s — the Israel Day Parade, she chaired that for a couple years. She was very involved at the JCC. It was just a range of activities,” Carl said. “And she would not do anything halfway. If she was in the swimming pool, she was in the deep end.”

Elaine received several recognitions for her volunteer work, and most recently was recognized by the Jewish Federation of Greater Pittsburgh as campaigner of the year, and with the Natalie Novick Woman of Philanthropy Award.

“She was always a super-worker, always someone who would take it upon themselves to speak with others about supporting the Federation,” said Jeff Finkelstein, president and CEO of the Federation. “She was a force of goodness in our Jewish community.”

Rabbi Seth Adelson of Beth Shalom called Elaine “part of a small but dedicated group” that would come to — and sometimes help lead — 6:30 a.m. services on Shabbat.

Adelson remembers a moment about five years ago when Elaine and Carl celebrated their wedding anniversary in the shul’s ballroom, with the whole family posing for pictures around the Torah.

“Beth Shalom meant so much to her,” Adelson said. “And it was so special to see her reveling in that moment.”

“She just loved being in services,” Carl said. “She’d read along and she felt it, in a way most people wouldn’t understand.”

Before going to law school, she investigated the possibility of getting her doctorate in French and teaching at the college level but abandoned the idea when she realized it would be difficult to find that line of work in Pittsburgh, Carl said.

So, she turned to her past. When she and Carl were living in Massachusetts, she would sometimes join her husband for his law classes at Harvard — and she was transfixed. Carl said the decision to pursue law made sense because it was a subject that piqued her interest.

“She just had a tremendous amount of curiosity,” he said. “Frankly, if I had been a doctor, she would’ve gone to medical school.”

Elaine worked for the law firm K&L Gates — where her son Curt now works — and in the law department at Highmark. She retired in 2011.

In retirement, Elaine was a regular fixture at Federation classes offered by Rabbi Danny Schiff, who said she was really adept at asking questions that cut to the heart of the matter.

“Elaine was one of the special people in Jewish life who simply couldn’t get enough of Jewish heritage and information about it,” Schiff said. “She was warm and inquisitive and wanted to soak up as much learning as she could.”

She also lived a very Jewish life, rejoicing in the traditions of each holiday — something she hoped to instill in the rest of her family.

“She’d put together these wonderful family meals,” Carl said. “The transmission of these practices and values to her grandchildren was a big mission.”

And her signature matzo ball soup?

“Adding club soda to the matzo balls — that was the secret sauce,” Carl laughed.

Due to COVID-19, graveside services and shiva were private, though, Carl said in a year the family will hold a public memorial service at Beth Shalom.

“In a year, we’ll have the chance,” Carl said, “to give Elaine the honor she deserved.”