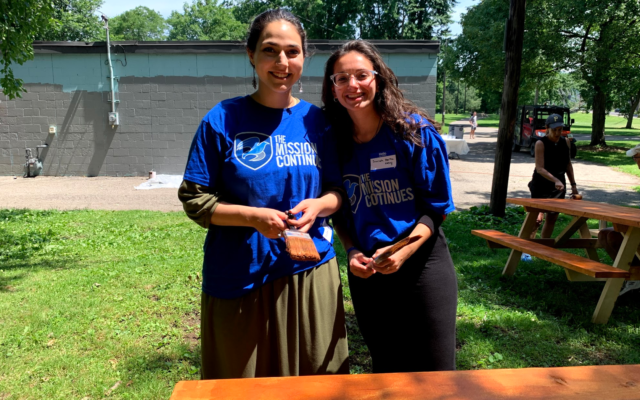 Jewish Pittsburghers joined in a communitywide effort on June 25 and 26 to clean and repair Westinghouse Park in commemoration of Juneteenth.

Juneteenth, which celebrates the emancipation of Black slaves, was officially recognized as a federal holiday on June 17, 2021, when President Joe Biden signed a bill passed unanimously by the Senate and by a 415–14 vote in the House.

The clean-up event in Westinghouse Park — a 10-acre park in the heart of Pittsburgh’s Point Breeze North, Homewood and Point Breeze neighborhoods — was sponsored by the Jewish Federation of Greater Pittsburgh, the Mayor’s Office, the Pittsburgh Parks Conservancy and The Mission Continues, a national organization of veterans who have returned from Iraq or Afghanistan and want to continue to serve the community. There are currently more than 83 platoons with subdivisions of soldiers in the United States, three of which are in Pittsburgh.

Members of the Jewish Federation’s Community Relations Council sponsored the event as a way to engage in “community impact and addressing issues of inequity,” said Cindy Goodman-Leib, who co-chaired the project on behalf of the Federation.

“There is so much we can do,” she said. “The real work is in rolling up our sleeves and doing. That is what this project is really aiming to do.”

The beautification project was also an effort to make Homewood residents feel welcome at the park, according to Derrick Clark, a platoon leader with The Mission Continues who grew up in Homewood. While the history of Westinghouse Park is clouded by racial and neighborhood tensions, he said, the groups participating in the event were aiming to create a more welcoming space for recreation.

As a child, Clark came to Westinghouse Park to play pick-up basketball or play on the playground, he said. He had wanted to clean up the park for a long time when the Jewish Federation “reached out to [The Mission Continues] to collaborate on the project. They were very instrumental in getting the message about unity across.” 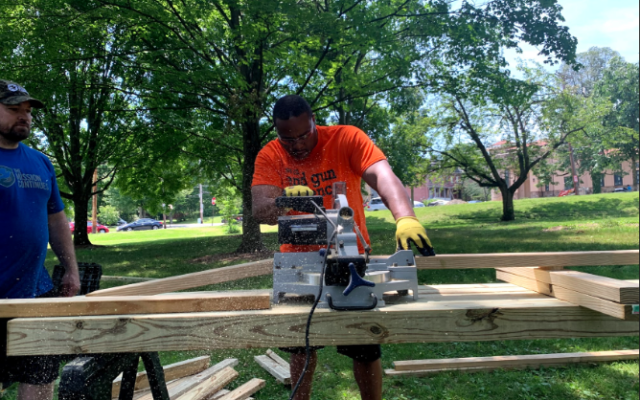 Dylan Groff, the Federation’s CRC associate, said the idea to plan a Juneteenth event first arose in December 2020.
“Especially in light of what happened to George Floyd in summer 2020, we really wanted to do something which celebrated freedom and gave people the opportunity to use shared communal spaces,” Groff said. “This is really about bringing Point Breeze and Homewood together.”

Westinghouse Park was once the site of the Westinghouse Estate, the former home of the late George Westinghouse IV, who stood alongside Nikola Tesla in discovering electrical currents in the late 19th century. Westinghouse created the first successful exhibition of electrical energy in the United States. His estate was demolished in 1919 and the land was donated for Westinghouse Park. The ruins of the estate itself are still concealed below the park’s surface.

“This project is a great way to beautify the community and bring neighborhoods together,” Gainey told the Chronicle. “You find out that we have a lot in common… You realize that we’re just one neighborhood.” PJC

Sarah Abrams can be reached at sabrams@pittsburghjewishchronicle.org.
More photos of the event can be found in the July 2, printed issue of the Chronicle.