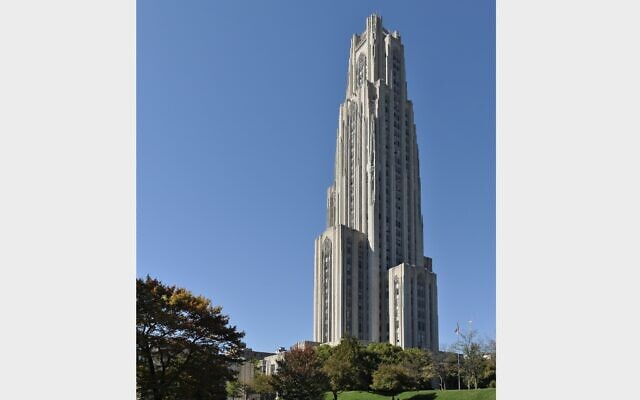 Cathedral of Learning at the University of Pittsburgh (Photo by Notyourbroom, creativecommons.org/licenses/by/3.0>, via Wikimedia Commons)

Jake Maxwell Harrison knows the value of a dollar — the Pleasant Hills native worked internships, federal work-study and at McDonald’s to help pay his way through Washington & Jefferson College and then Duquesne University School of Law.

“In terms of financing my education, money was a huge factor for me in where I would eventually attend,” Harrison told the Chronicle. “In all honesty, cost was the most important factor in where I would go to school for both undergrad and graduate school. This was followed by the perceived value or prestige of the school.”

But Harrison, who works for the Department of Treasury as a revenue officer, had a secret weapon — Jewish Scholarship Services. In his sophomore year, he applied to the Sarah and Tena Goldstein Memorial Fund and received between $7,000 and about $10,000 in scholarships each year after that.

“That was instrumental in changing my life in terms of how I financed my education,” Harrison said. “The amount of financial pressure this relieved is incalculable, and it allowed me to better focus on my studies rather than panic over how to pay for my next year or semester of schooling.”

JSS, a program of the Jewish Federation of Greater Pittsburgh and administered by JFCS, processed 167 applicants and gave out more than $500,000 in the 2020-’21 academic year; the program is processing applications for the next academic year.

“It’s much more fair that everyone gets looked at together,” Himmel told the Chronicle. “So, students who need the most get the most. It’s not just awards for the most industrious.”

JSS is particularly important during the pandemic, when many teens are furloughing decisions to go to college or dropping out instead of pursuing largely virtual educations, Himmel said.

“We’re not going to know the reality of what COVID is doing for five to 10 years,” she said. “And that’s especially true in education.”

It’s simple to qualify for JSS funds: one must be Jewish, pursuing post-secondary education like college or a trade school, and live in the greater Pittsburgh area. The scholarships only apply for those seeking a degree, not a professional certificate, but they also apply to study abroad opportunities, Himmel said.

Jamie Kaufer, a pediatric dentist, studied abroad in France during her years at the University of Pittsburgh thanks to JSS support. Hailing from Greensburg, she had her sights set on Pitt pretty early.

“I knew I wanted to go into the medical field, and I knew Pitt had a great science program,” Kaufer said. “And a big factor was the Jewish community there.”

Kaufer, a board member at Congregation Emanu-El Israel in Greensburg, received the Goldstein fund support, just like Harrison. She graduated from Pitt’s dental school in 2017.

“I definitely hope to give back to the JFCS,” she said. “They helped me so much when I was in school. You want to help so a student today can get what I had.”

Matthew Bolton, director of the JFCS Squirrel Hill Food Pantry, said that the JFunds umbrella has helped more and more people in need with programs like tax credits and rent assistance.

“Jewish agencies such as the food pantry have pivoted to reflect the new needs of our communities,” Bolton said.

Himmel stressed that the interview process for JSS is meant to bring people into the fray, not divide them.

“We really try to be inclusive — and that’s a Jewish value,” she said. “We want the word to get out … It’s really hard to live a Jewish life and save for college. There shouldn’t be embarrassment.

“You need to get all the help you can get.” PJC