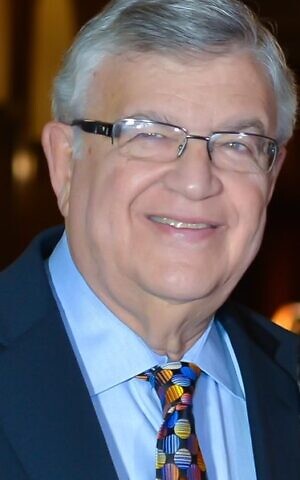 SPEAR: John Spear, 83, of Squirrel Hill and Oakland, died Sunday, Aug. 14, 2022, after a courageous 17-year battle with kidney cancer. John was the son of the late Jacob and Else Spear; beloved husband of the late Janet Cohen Spear; loving father of Jeffrey (Sheryl Wein), David (Jill) and Douglas (Andrea); father-in-law of Amy Spear; proud grandfather (Papa John) of Rebecca (Stefan Haugen), Abigail, Natalie, Marni, Charlotte, Archie, Tessa, Matthew and Amanda. He was so proud of his three sons, each of whom became lawyers. They thought he worked too hard in retail and Janet insisted they have a graduate degree in a profession. The family expresses gratitude to his college friend, Marcia Gross, with whom he reconnected on social media and enjoyed his final years. A lifelong Pittsburgher, John was born on Oct. 23, 1938. He graduated from Taylor Allderdice High School in 1956, forming lifelong friendships as evident by the many class reunions he organized. He graduated from the University of Pittsburgh in 1960 and was the president of Pi Lambda Phi fraternity. John married Janet Elinor Cohen on May 6, 1962, a partnership of true love for 55 years. Their courtship began when Janet bought his ‘53 Chevy for $200. He then delivered snow tires to her house and asked her for a date. They went to LeMont and on the way home he startled her by announcing that he would marry her. Soon thereafter, their love affair began. Janet and John were so fortunate to travel the world together, enjoying special trips to Israel, China and many destinations in Europe. They enjoyed many winters in Key Biscayne, frequent visits with family and friends, and summer trips to Hilton Head and Maine. John worked with his parents at Fashion Spear in Braddock, his family business, from high school through 1980. The business, which opened in a 20-by-60 Duquesne Light payment office, grew to a three-store 21,000-square-foot chain, expanded to Greengate Mall in 1965 (later, Westmoreland Mall in 1977) and Northway Mall in 1971, with its famous designer room. Fashion Spear was known for its exclusive merchandise; customers came to shop from all over the tri-state area. John created an exclusive bridal business at the stores, where every bride received a gift. In 1980, he joined Kaufmann’s in Greensburg as store manager. His Fashion Spear customers followed him. He was soon promoted to manage the South Hills store (now Galleria). In October 1983, he was promoted downtown to become divisional merchandise manager of coats, furs and bridal. Soon thereafter, he assumed additional responsibilities of hosiery and dress accessories. He then was appointed divisional vice president, soon adding Young Attitude Casual Sportswear to his responsibilities, and becoming full vice president. He quadrupled Kaufmann’s fur business in one year. His coat and fur auditorium sales and his flair for fashion provided much excitement to the downtown store as well as the branches. He was known for successful fur trunk shows in Kaufmann’s Pittsburgh branches and in Erie, Youngstown, Cleveland, Charleston and New York state locations. Nothing gave him more satisfaction than working the floor, ensuring that all his customers received special attention. John made a point in retirement to stay in contact with many executives and young trainees whom he mentored. Upon his retirement from Kaufmann’s, he consulted for three years for the Millstein family, founders of Burlington Coat Factory. John assumed many leadership positions in community and charitable organizations. He was vice president of the Braddock Rotary Club (1978-80) and a Rotarian since 1964. He was also president of the Greater Braddock Chamber of Commerce (1972-74), where he negotiated the reopening of the Braddock schools after the Martin Luther King riots. He was president of the YouthSquad, a group of men who came out of jail and were provided work to assist in their rehabilitation, even once guaranteeing a loan for one of its members. He was vice president of Hebrew Free Loan, where he served on the board for 20 years. He also served as president of Forward Shady Housing Corp for five years and on its board for over 20. He was a member of the board of Jewish Residential Services for six years and the Rodef Shalom Congregation for six years. He was president of Concordia Club and served on its board for many years. He was on the board of the Israel Heritage Room at the University of Pittsburgh in the Cathedral of Learning. He mentored for three years in the Mentoring Partnership of the Pittsburgh Promise at Sterret School. He volunteered for the Jewish Federation of Greater Pittsburgh. John spent 13 summers at Kamp Kewanee in LaPlume, Pennsylvania, six as a camper and seven as a hiking and canoeing counselor. Those friendships lasted a lifetime. John was a lifelong Pittsburgh sports fan, especially enjoying Pirates games, becoming a season ticket holder at the age of 16 at Forbes Field. He coached his sons’ teams for six years in the 14th Ward Little League and won two championships. Services at Rodef Shalom Congregation, 4905 Fifth Avenue (at Morewood), on Tuesday, Aug. 16, 2022 at 11 a.m. Visitation 10 a.m. to 11 a.m. Interment West View Cemetery. Contributions may be made to the Spear Endowment Fund at Rodef Shalom Congregation, the Janet and John Spear Philanthropic Fund at the Jewish Federation of Greater Pittsburgh or Hebrew Free Loan. Arrangements entrusted to Ralph Schugar Chapel, Inc., family owned and operated. schugar.com PJC