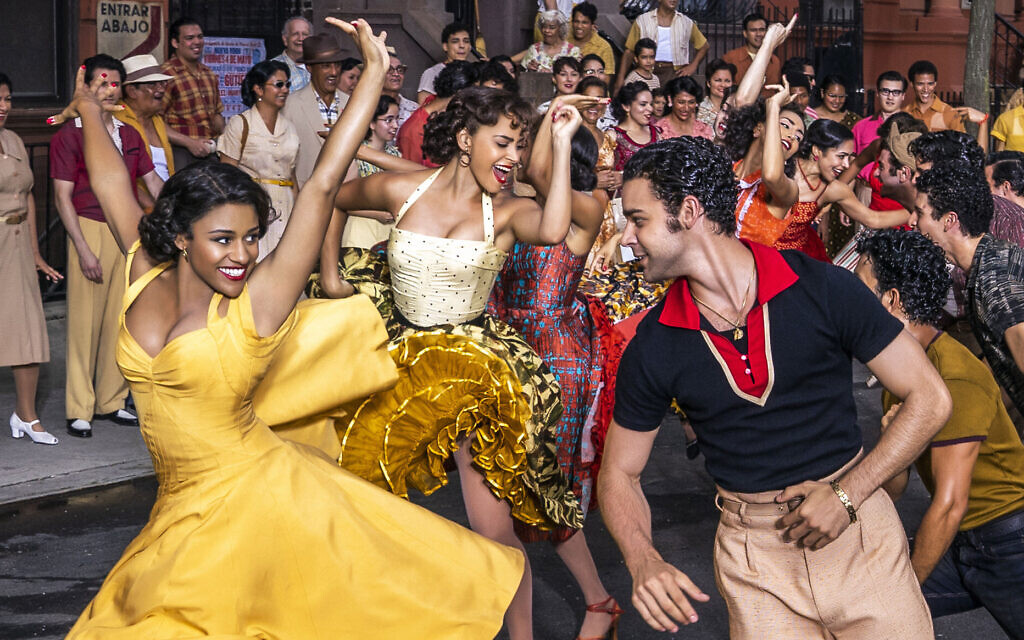 (JTA) — In 1955, theater director Jerome Robbins approached writer Arthur Laurents and composer Leonard Bernstein with a new idea for a Broadway musical: a contemporary retelling of “Romeo and Juliet,” set among warring gangs of Jews and Catholics on New York City’s Lower East Side.

It would be called “East Side Story,” and it would take place at the turn of the 20th century during the holidays of Easter and Passover.

But something wasn’t working. The writers wondered if all they were doing was adding music to “Abie’s Irish Rose,” an early-20th-century play about an Irish Catholic girl and a Jewish boy who fall in love. The story didn’t feel fresh enough.

In his memoir, Laurents recalled the moment “East Side Story” became “West Side Story”: when he read a news headline that blared, “More Mayhem from Chicano Gangs.”

Thus, Robbins’ original idea morphed into a tale of a white gang — the Jets — and a Puerto Rican gang — the Sharks — clashing on the Upper West Side just a few years before the area was targeted for urban renewal. Bernstein, Robbins and Laurents remained the show’s creative leads, and later roped in Stephen Sondheim to write the musical’s lyrics. All four men were Jewish, though they were no longer writing about Jews.

“West Side Story” became one of the biggest Broadway musicals of all time. And by 1961, the film, co-directed by Robbins and Robert Wise, cemented the show’s status as a classic of the musical form — even as it cast ethnically white actors to play Latino characters, darkening their skin for the screen.

Sixty years after the first “West Side Story” film was released, another two highly acclaimed Jewish creatives — director Steven Spielberg and screenwriter Tony Kushner — have returned to the material to helm a hotly anticipated remake. This new “West Side Story,” which is being released just weeks after Sondheim’s death, retains the general arc of the original musical while making notable changes to the story and presentation, including casting Latino actors to play the Sharks and their significant others.

Yet in the current cultural climate, when audiences are highly sensitive to onscreen depictions of underrepresented groups, new questions have emerged: Were Spielberg and Kushner the right people to attempt a remake of “West Side Story,” or should that task have fallen to Puerto Rican creatives? And there is also a deeper question: Should the show, which some critics and academics have said is fundamentally outdated, even have been remade at all?

The original show’s transformation from a Jewish story to a Puerto Rican one mirrored the American Jewish community’s own assimilation and shedding of its outsider status in the mid-20th century. By the 1950s, Jews were finding ways to assimilate into white America while new concerns about racialized violence among newer immigrant groups, particularly Latino communities, were bubbling up in the city.

“All of a sudden, all these questionably white groups at the beginning of the century are sort of coming together and becoming, in the case of the musical, a gang, a racial category,” said Warren Hoffman, executive director of the Association for Jewish Studies and author of the 2014 book “The Great White Way: Race and the Broadway Musical.”

“Puerto Ricans, Black Americans, people of color become the ‘new enemy’ in the U.S. So this is how whiteness is changing, and what’s happening in ‘West Side Story,’” Hoffman told the Jewish Telegraphic Agency.

But rather than feel seen by their community’s depiction in the original show and film, many Puerto Ricans instead felt disparaged.

“As a child I found the music dazzling but the overall message racist,” Aurora Levins Morales, a Jewish Puerto Rican writer and activist, told JTA about her experience watching the 1961 film. “I wasn’t aware that it was created and directed by Jews, and that certainly makes the racist aspects of the film even more painful for me as a Jew.”

Morales said her classmates would mock her when the film came out. “I used to be taunted at school with the lyrics ‘Puerto Rico, my heart’s devotion, let it sink into the ocean,’ and the fact that Rita Moreno was the only Puerto Rican actor cast in the film always appalled me, although I think she’s fabulous and I always admired her,” she said.

The song Morales is referring to, “America,” is one of the most controversial in the 1961 film; though the lyrics mock the mainland United States and Puerto Rico in equal measure, many listeners have taken offense at the way the Puerto Rican characters callously deride their homeland. Even Sondheim seemed hesitant about the project, at first declining to do the show because, he reportedly said, he had “never been that poor and I’ve never even known a Puerto Rican.”

Puerto Rico has a substantial Jewish community: The island is home to an estimated 1,500-2,500 Jews, according to a 2016 demographic survey by Hebrew University, making it the largest and wealthiest Jewish community in the Caribbean. Most Puerto Rican Jews are descendants of Polish Jews who moved to the island from Cuba after Fidel Castro came to power in 1959; many Puerto Rican Jewish families also migrated to the mainland United States during that time, mirroring broader Latino immigration patterns of the period.

There are links between the immigrant communities, too. In her book “Medicine Stories,” Morales defines the Jewish-Puerto Rican relationship as a history “made in New York garment sweatshops filled first by Eastern European Jews and then by Puerto Ricans, in times of both solidarity and betrayal, when the price of upward mobility for white Jews was the abandonment of People of Color.”

In 2018, when the “West Side Story” remake was in its early stages, Kushner and Spielberg held a Q&A at the University of Puerto Rico to hear out concerns about the new film’s direction. Kushner, in response to a question about “America,” said the thrust of the song reflected the creators’ Jewish roots. “They’re using the Jewish immigrant experience, the notion that you look back where you came from and go ‘yech,’” he said.

For the 2021 film, the song’s lyrics have been altered, its most offensive lines scrapped. Other changes include more conversations in Spanish, with no English subtitles, as well as the hiring of numerous experts to guide authentic culture and slang. Those changes seem to have paid off: Early reviews, including from Latino critics, have been mostly raves, and critics are praising Spielberg and Kushner’s adaptation choices. One prominent film critic even singled out the new version of “America” as a highlight.

Those reactions would seem to fulfill the promises Spielberg made at the beginning of the film’s production.

“The reason we’ve hired so many Puerto Rican singers and dancers and actors is so they can help guide us to represent Puerto Rico in a way that will make all of you and all of us proud,” Spielberg told the crowd in San Juan.

For his part, Spielberg — whose representatives did not return a request for comment, but who frequently references his own happy childhood memories watching the original film — has maintained that, regardless of its problems, “West Side Story” is a “timeless” piece. That characterization rankles some.

“When someone says something is timeless, I’m not sure what they mean by that. Because I think shows are very particular about what they’re trying to say,” Hoffman says. “The politics of ‘West Side Story’ back in ’57 are not the politics of the U.S. in 2021.”

Rebecca Gleiberman, a 29-year-old who grew up Puerto Rican and Jewish in Florida, says she has never felt fully part of either community. She didn’t think much of “West Side Story” when she saw it as a child, but “as an adult, you definitely get the sense that it’s almost Puerto Rican caricatures that sort of make up most of the characters.”

Gleiberman says she’s open to a new remake by two Jewish creators, as long as it’s done right. The bigger issue, to her, is watering down authenticity or playing into stereotypes to make a production “comfortable” for anyone sitting in a theater — problems she said plagued another 2021 movie musical set in a New York Latino community, “In The Heights.”

“Those felt like Hispanic caricatures and stereotypes to me, and that was written by Lin-Manuel Miranda,” she said. “I felt like that was kind of written in a way that was more digestible for a white audience. So I don’t know if it necessarily matters who’s writing it.”