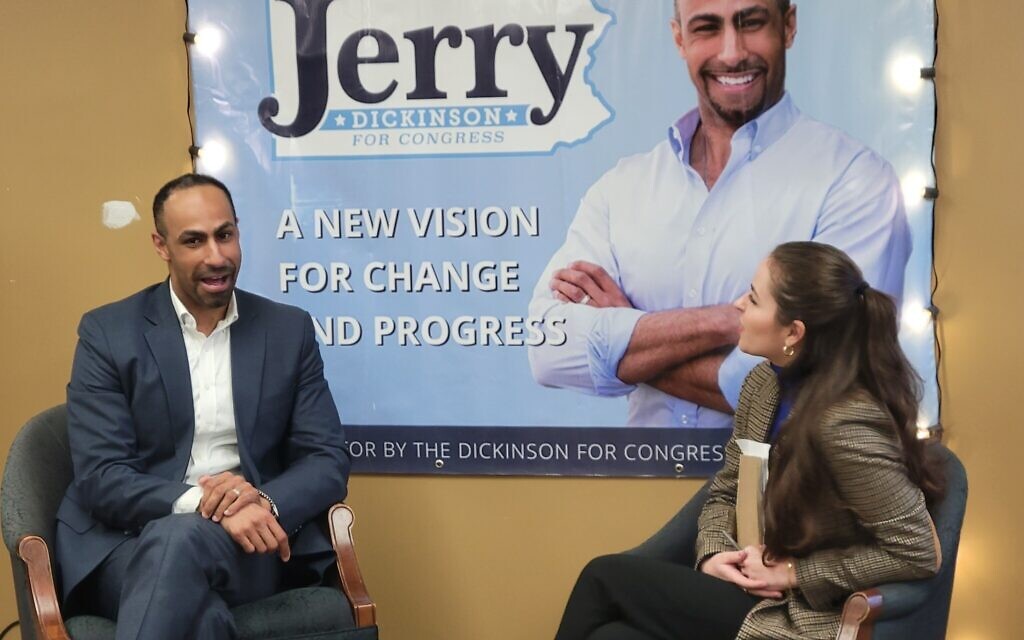 Jerry Dickinson spoke at a forum organized by the CRC earlier this year. Photo by David Rullo.

My support of the Jewish community is not influenced by political convenience. It is based on a personal connection and some shared experiences. My journey of identity and longing for a safe and secure home has been an enlightening struggle — and adventure.

Over a decade ago, on a late summer night, I recall speaking with my adoptive father, Robert Dickinson, in the dining room of the foster home where I grew up. At that time, my father had been diagnosed with pancreatic cancer. His likelihood of survival was low. But the conversation was revealing for other reasons.

My father felt obligated, if he were to pass away, to divulge the events that led to my placement in foster care. I knew I was born to a Black father and white mother, but I was unaware of their devastating health conditions and extreme impoverishment. He explained that I was placed in the foster system with no intention of ever returning to my biological parents. I landed at his home after a few brief stops at emergency shelters. As my adoptive father eloquently states in our recent campaign ad, I arrived at his foster home “with nothing” and to watch me “grow was a miracle.”

There, I grew up and shared the same space with a multiracial Brady Bunch family of 11 foster children; white kids and Black kids, teenagers and toddlers, all coming from broken homes and tragic circumstances. Throughout our lives, we’ve experienced trauma, violence, addiction, incarceration and more.

I also struggled to reconcile my home life with my social surroundings. Those struggles led to identity crises. I was a racial minority living in a large multiracial foster home. At the same time, I was a minority within the predominantly white community of Shaler Township. I was ridiculed at school, chastised in the neighborhood, and mocked for being “too white” by some or “too Black” by others. While I recognized, as a mixed-race man, that my ancestors were both European and African, I still struggled to reconcile the tragic history of the African diaspora’s slave trade with my ancestral history of European colonialism.

Not only was navigating race and culture a complex journey but so was religion. We were raised Methodists. But, my older sister, Darcey, later married a Jewish man named Andrew, who had lived in Israel. She converted to Judaism. Our family gatherings turned into rich cultural and religious experiences. We celebrated everything from bat mitzvahs to baptisms. We spent time in Jewish synagogues and Methodist chapels. Class, race, religion and culture seemed to have no boundaries.
Yet, I always longed for a space and place to cultivate my own identity amid a world that didn’t seem to understand (or respect) my mixed-race heritage, diverse religious experiences, and non-traditional family upbringing.

Amid these identity crises, I learned important life lessons that I carry with me today, the ability to listen to the other side, the capacity to empathize with those who are struggling, the desire to learn and better understand another person’s lived experiences and perspectives, and an eagerness to build consensus.

It’s these shared experiences that allow me to see and understand some of — but certainly not all — the interests and struggles of the Jewish community.

Indeed, I support the aspirations of the Israeli people to be free, self-empowered, prosperous, safe and secure. I believe the U.S. should continue to play a leadership role to build consensus and empower talks between the Israeli and Palestinian people. I believe the U.S. should help facilitate bilateral negotiations to achieve a two-state solution or a resolution agreed upon by the Israeli and Palestinian people.

I oppose all forms of antisemitism, violence and discrimination against the Jewish community. The tragic Tree of Life incident forever changed our conception of safety and security. Likewise, I strongly condemn efforts to delegitimize Israel as a sovereign nation-state and homeland. I support the right of Israel, as a Democratic Jewish state, to exist in peace and security.

I wholeheartedly echo Dr. Martin Luther King’s statement that “Israel’s right to exist as a state in security is incontestable…[p]eace for Israel means security and that security must be a reality.” The Israeli government, one of the world’s most diverse coalitions of elected officials, is a symbol and beacon of the promise of multiracial and multiethnic democracies. We must do all we can to protect Israel from outside threats that attempt to delegitimize, destroy or erase its existence.

As such, Israel has a right to defend itself from, among other threats, Iranian nuclear weapons or terrorist attacks by Hamas. I support funding the Iron Dome and continued U.S. foreign aid to Israel.

Safety and security are not simply a matter of policy or politics for me — it is personal. I want my extended family in Rishon LeZion, outside of Tel Aviv, to be safe and secure. I want my Jewish nephew, Leo, who currently attends Hebrew University in Jerusalem, to be protected.

I’m running for Congress because I believe that my religiously diverse and multiracial upbringing, international work as a Fulbright Scholar in South Africa, expertise as a constitutional law scholar, and experience bringing people together from different walks of life, put me in the best position to address the diverse interests and concerns of the region, including the Jewish community. PJC

Jerry Dickinson is a law professor at the University of Pittsburgh and a Democratic candidate for Congress in Pennsylvania’s 12th Congressional District.