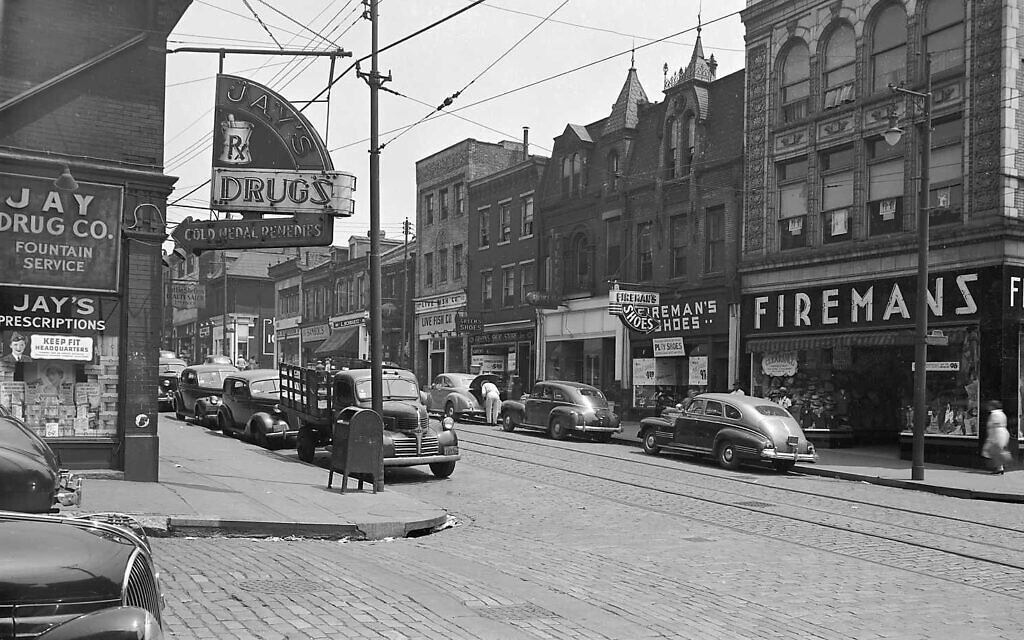 From his perch at his family’s drugstore, amateur historian Rich Brean watched the Hill District’s ethnography shift as Jewish and Black Americans lived and worked side by side in the middle of the 20th century. The story of the Hill, in fact, was how the two groups interacted in the city slums and, for at least a generation, became more than neighbors.

“I first started working at the store at the candy counter in 1958 as a fourth-grader at John Minadeo School,” Brean said during a recent virtual presentation hosted by Rodef Shalom Congregation. “The store was a fully integrated enterprise with the workforce consisting solely of African Americans and members of our family. Apart from my father, Blacks held all positions of authority. Both pharmacists were African American, Bob Williams and English Webb, as were the two fountain managers, Lucille Brown and Viola Lewis.”

“One employee, our porter, Al White, a retired Black steelworker, bridged the two cultures in the store by dint of his ability to speak basic Yiddish,” Brean said, “albeit with a pronounced Galitzianer accent, which he had picked up as a teenager working in a summer job loading seltzer trucks on Bedford Avenue when he worked with an old Jew and had to learn Yiddish because the old man’s English was so bad.”

Brean spoke recently as part of Rodef Shalom’s new series, “The Jewish Pittsburgh History Sessions,” offered the third Tuesday of each month, through May 2021. The monthly presentations will highlight neighborhoods, rabbis, architecture and social action that has shaped Jewish life and Pittsburgh culture in the last 200 years.

Though Jay Drug Company at 1801 Centre Ave. in the Middle Hill was, in Brean’s words, “a mostly Black world” by the 1950s, Jews continued to be a presence in the Hill for about another decade or so, though not in the numbers they were generations earlier.

“The Middle Hill was heavily Jewish by 1915 and slowly became a majority Black by 1930, with the two groups living side by side. My mother, from the time her family immigrated to Pittsburgh in 1920 until the time she married my father and moved to Oakland in 1938, lived every day of her life in a building in which she had both Jews and African Americans as neighbors.”

But the two groups were more than neighbors.

“Hill District Jews rated the various ethnic groups they encountered by the degree of their anti-Semitism or lack thereof,” Brean said. “African Americans ranked high in Jews’ esteem because they regarded Jews as ‘people of the Bible’ and had no history of ingrained anti-Semitism like that brought from Europe from many white Christians.”

In 1928, Miller School, Brean’s mother’s alma mater, still had the greatest number of Jews of any elementary school in the Pittsburgh Public Schools with 728 students, but Colfax Elementary in Squirrel Hill was a close second with 708.

The number of Jewish students in Hill District schools dropped from 4,119 in 1924 to 2,796 in 1928. That same year, on Nov. 16, the Jewish Criterion — a predecessor paper to the Pittsburgh Jewish Chronicle — published a story stating that “the Hill District, so far as Jews are concerned, is through.”

In 1940, 16 of Pittsburgh’s 33 synagogues were still on the Hill but by 1957, only one shul remained, with most having closed or relocated to Squirrel Hill and the East End.

Brean’s second talk on the subject, which will focus on Jewish labor and Jewish naturalization, will take place Nov. 17. But Brean, who lives in Point Breeze, is far from nostalgic about the Jewish Hill District.

“My bottom line is that the overwhelming motivation for Jews to leave the Hill was that it was a horrible 19th-century slum with miserable housing and sanitary conditions, and that they left as soon as they had the financial ability to do so,” Brean told the Chronicle.

“The Jewish movement off the Hill was underway by 1910 before the major Black migration triggered by World War I had even begun, accelerated during the good times of the 1920s, slowed down in the bad times of the ’30s, and surged again during the economic boom of World War II,” Brean said. “The Black and Jewish communities lived side by side in the Hill for 30 years with a great deal more harmony than existed between African Americans and any other white immigrant group … The point of my talk is that proximity of Jews and Blacks created a mutual bond of shared victimhood between the two that created enormous sympathy for Black suffering among the majority Jews.”

The Jewish Hill District isn’t the only topic on the agenda during Rodef Shalom’s history series. Falcone, an art historian, plans to tackle the art and architecture of Rodef Shalom, with a special focus on how things like the building’s facades and stained glass are intrinsically illustrative of the Reform Judaism movement.

“The people that built [Rodef Shalom], it was really an expression of their radicalism — if you look at synagogue architecture in America, it’s pretty radical,” Falcone, a Rodef Shalon board member who lives on the North Side, told the Chronicle. “I’m happy to shine a light on that. Just because something is old doesn’t mean it’s stodgy.”

Berg plans to focus on the life and work of Rodef Shalom Rabbi J. Leonard Levy, who served the Oakland congregation from 1901 until his death, at age 51, in 1917.

“He was extremely active in social justice causes in the early 20th century — he was working on labor rights, women’s rights, clean water, sterilized milk; he really was everywhere,” Berg said.

Among other achievements, Levy, who became a pacificist after the Spanish-American War, launched the Pittsburgh Society for Universal Peace in 1904 and convinced industrialist Andrew Carnegie to serve as its chairman. He also visited Japan in 1905 at the tail end of Russo-Japanese War, in part to encourage Russia to treat Jews living in Siberia better.

“There were a lot of instances [in Levy’s time] where people’s lives were in danger because corporations were running rampant,” said Berg, drawing parallels to the current cultural moment. “It’s 100 years apart and it’s a time we have to stay connected to activism to ensure people are protected.” PJC