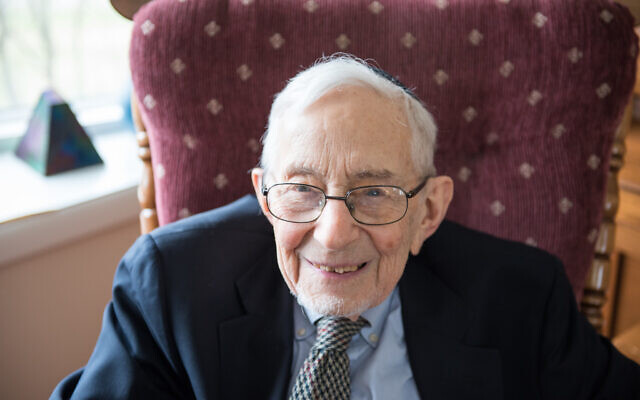 Jerome Rosenberg — a native Pennsylvanian who loved Judaism and Jewish causes, and became the longest-serving faculty member and administrator at the University of Pittsburgh — died on June 12, eight days short of his 100th birthday.

Rosenberg was born June 20, 1921, the youngest of five children in an Orthodox family living in Harrisburg. After weathering much of the Depression, he attended Dickinson College in Cumberland County, earning a bachelor’s degree in chemistry. He went on to get a master’s degree from Columbia University in New York City, and had a postdoctoral fellowship at the University of Chicago before moving to Pittsburgh in the 1950s.

His graduate work at Columbia was interrupted in 1944, when Rosenberg started working at the Manhattan Project during the development of the atomic bomb, according to media reports. His work revolved around chemistry as it related to the diffusion process for separating uranium isotopes.

In New York, Rosenberg met Shoshana Gabriel, whom he married in 1946. Together they raised two children, Jonathan and Judy. Shoshana Rosenberg died in 2017 after a battle with Alzheimer’s disease.

“Ours was a house with lots and lots of culture, lots of music, lots of Judaica and, most of all, incredible models for what it was to be a good human being,” said Judy Cohen, Rosenberg’s daughter, a retired administrator for the U.S. Holocaust Memorial Museum in Washington, D.C.

In 1953, Rosenberg came to the University of Pittsburgh as a chemistry professor, and he worked there until 2017, retiring at age 95. Among a host of roles, he served as president of the faculty senate, dean of the faculty of arts and sciences, vice provost and — in his final act — as the school’s integrity officer.

“He was a real workaholic,” said his son, Jonathan Rosenberg, a University of Maryland math professor who lives in Silver Spring, Maryland. “He adapted to different situations incredibly well. He was a scientist and a chemistry professor but what he excelled at was being a university administrator — he really loved it.”

University of Pittsburgh Chancellor Emeritus Mark Nordenberg told the Pittsburgh Post-Gazette that Rosenberg “truly was extraordinary, a person with unbelievable intelligence and a seemingly inexhaustible supply of energy.”

“As he reached what others might have considered to be retirement age, he completely reinvented himself by becoming Pitt’s chief research integrity officer,” said Nordenberg, who served as Pitt’s chancellor from 1995 to 2014. “Jerry loved being a part of the university community, just as we all loved having his good cheer and inspiring example in our midst.”

At Pitt, Rosenberg played key roles in Jewish causes — funding and building the Israel Heritage Room at the Nationality Rooms in the Cathedral of Learning, and establishing the school’s Jewish studies department.

The creation of the Jewish studies program was no small feat, according to Alex Orbach, a Pitt professor who first met Rosenberg in 1977. Within three years of its founding, Rosenberg had worked to secure two full-time positions dedicated to the program — one of them with tenure.

“He’s the founder and the shaper of Jewish studies at the University of Pittsburg today,” said Orbach, who cited the program’s untenured lectureship that bears Rosenberg’s name.

“He was a Renaissance man, in terms of music, in terms of art,” Orbach said. “He came to Pittsburgh and he stayed. He was a brilliant scholar, a methodical administrator. He was ethical and moral and consistent.”

“He never let us down,” Spiegel said. “He was very involved, very participatory. He was not afraid to get up and lead services. It didn’t matter the time of the services, he was there. Every shiva or minyan we had, he was there.”

Rosenberg also was there for his family, both his children stressed.

Rosenberg had six grandchildren and seven great-grandchildren, and, in the three weeks before his death, he attended a grandson’s wedding and a great-grandson’s first birthday party, Cohen said.

“He was a major pillar of the community, and Pittsburgh’s greatest booster — he’d go around telling everyone it was the greatest place to live,” Cohen said. PJC