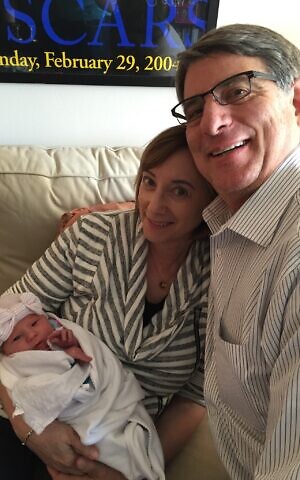 ACKERMAN: Jeffrey Bruce Ackerman was born in McKeesport, Pennsylvania, in 1953 and lived there until he went to Penn State University where he received a B.S. in psychology. He then attended Northeastern University School of Business where he was awarded an MBA. It was around this time that he met the love of his life, his wife Lyn, and after living apart for two years while she attended law school in Philadelphia, they were married in June 1978 in a beautiful wedding at the Barclay Hotel in Philadelphia, where they danced the night away to the disco music of “Saturday Night Fever.” They honeymooned in California and then made their home in Squirrel Hill, where they lived their entire married lives.
Jeffrey and Lyn rediscovered their Jewish roots in their early 30s and began living an observant lifestyle, sending their three children to Hillel Academy and then Yeshiva University. Jeffrey was very proud of being able to send his children to college and graduate school. He began a successful career in commercial real estate, first with Arnheim and Neely and then with CBRE, where he held the title of managing director for over 10 years. He thrived in the world of commercial real estate and was very well respected for his business knowledge, great interpersonal skills and leadership, as well as a passion for real estate. Jeffrey strove every day to be the best he could be, and always gave 110%. In his spare time, he loved football and was an ardent Steelers fan (and Penn State as well).
Jeffrey’s true passion was his family. He loved and adored his three children, Danny(Talia), Rebecca and Hannah, and was immensely proud of their accomplishments, as well as his two beloved grandchildren, Alexandra and Zachary. In addition to his wife, Lyn, and his children, he is survived by his brother Richard( Elaine) of Squirrel Hill. He was predeceased by his brother Mark.
Recently Jeffrey had undergone major open-heart surgery to replace his aortic valve, and handled the surgery and recovery with courage and great determination. He will be sorely missed by all who knew and loved him.
Funeral arrangements entrusted to the Gesher HaChaim Jewish Burial Society.
Contributions may be made to Shaare Torah Congregation, the American Heart Association, Hillel Academy of Pittsburgh or Yeshiva Ha’Atid of Teaneck, New Jersey. PJC