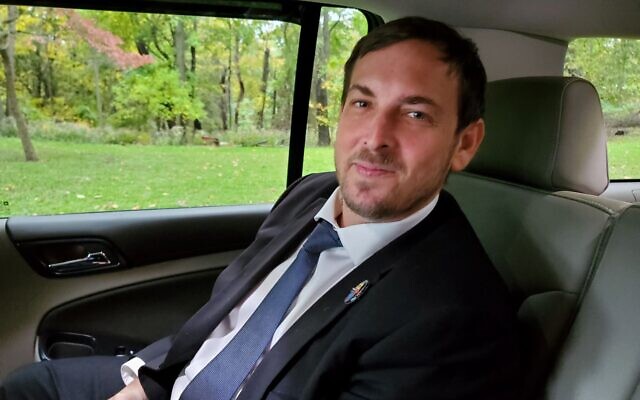 Ambassador Asaf Zamir has several messages for Pittsburgh’s Jewish community. Some he shared while here on Oct. 27 to mark three years since the attack at the Tree of Life building. Others, he said, will be shared the next time he comes to town.

Zamir’s visit, which was his first since becoming Israel’s consul general in New York two weeks ago, was a chance to observe, he said.

Typically, a consul general meets with civic leaders, members of the media and representatives of a city’s Jewish Federation in an effort to bolster support for Israel. During his day in Pittsburgh, Zamir did meet Mayor William Peduto and Tree of Life’s Rabbi Jeffrey Myers, and gave interviews to local press, but his visit was without a political agenda, he said.

“I just came to pay my respect, to sit here, and to see and to listen,” Zamir told the Chronicle.

Unlike current Israeli Prime Minister Naftali Bennet, who (within his role as then-minister of the diaspora) spoke at Soldiers & Sailors Memorial Hall & Museum one day after the attack in 2018, Zamir was not a part of this year’s public commemoration in Schenley Park. Instead, Zamir represented Israel by quietly attending the formal gathering and quickly departing after the program’s conclusion.

Zamir, 41, has been in politics for more than a decade. He is the former tourism minister of Israel and served as the deputy mayor of Tel Aviv. He lived in Florida for several years as a child and speaks fluent English.

The new consul general’s time in Pittsburgh was limited to several hours, but he said he enjoyed visiting the city and was impressed by both Peduto and Myers.

Speaking with the rabbi, Zamir said, was “powerful, emotional and important.” And meeting with the mayor, after he’s done so much for the Jewish community and has been such a “great friend to Israel,” was a priority, Zamir said. After the attack, Peduto did “a lot of amazing work and was very committed. I wanted to say thanks.”

On future trips to Pittsburgh, Zamir wants to “showcase the beautiful things” happening in Israel. He acknowledged, though, that doing so might be challenging when it comes to younger Jews.

“I feel that there is a growing disconnect with younger Jews all over the nation, and I'm not sure that we're giving them the tools they need sometimes to see, or understand, or deal with the complexity of Israel,” he said.

Despite this increasing divide, Zamir will work to engage and unite people, regardless of their age or place of residence.

“I have a goal to reconnect all Jews to Israel on their terms,” he said. “I think every Jew in the world should have his own private identity, feeling, towards Israel. I think Israel is everyone's, and I think we haven't always done a good enough job in being inclusive in that aspect. And I want to try to change that.”

But that’s a goal for another day, he said.

What Zamir wanted people to know on Oct. 27 was that “when things like this terror attack happen thousands of miles away from Israel, everyone's stomach in Israel turns like it happened in their backyard,” he said. “I think a lot of people here don't realize that anymore or don't have a deep understanding of that anymore.”

Oct. 27 was a chance to pause and remember that connections exist independent of politics or time, he said, because “at the end of the day, the Jewish people are one people.” PJC