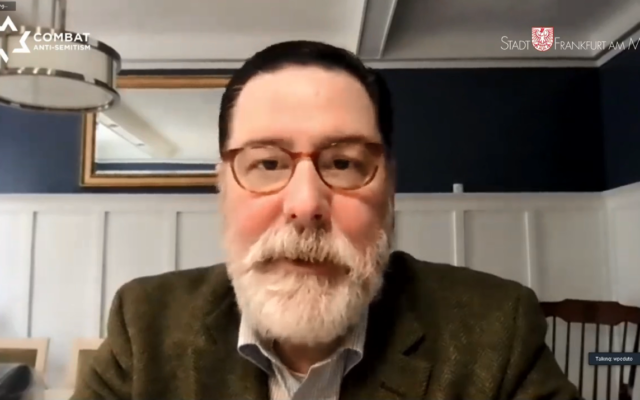 Pittsburgh Mayor Bill Peduto was among leaders from 21 countries who pledged to defeat anti-Semitism at the first-ever Mayors Summit Against Anti-Semitism, held virtually on March 16, 2021.

Participants committed to making the summit the first step in establishing a long-term framework for defeating anti-Semitism, prejudice and hatred.

“I can tell you firsthand what it is like dealing with anti-Semitism,” Peduto said during the event. “I never expected that my city would be referred to as ‘the city of the most horrific anti-Semitic crime in the United States.’”

After recounting the events of Oct. 27, 2018, when a gunman murdered 11 people inside the Tree of Life building, Peduto shared how just moments after the shooting, and for months afterward, people of diverse faiths offered unyielding support.

“In Pittsburgh, we are very proud of our interfaith community: Christians, Muslims and Jews, working together in order to be able to find ways to bring about peace in our own community,” Peduto told moderators during the plenary session. “The trauma of that incident affected everybody, and what everyone in Pittsburgh understood is that an attack against one is an attack against all of us.”

Peduto was joined at the daylong summit by mayors from cities including Athens, Brussels, Buenos Aires, Louisville, Malaga and Toronto. The program, which was hosted by Frankfurt am Main, in partnership with the Combat Anti-Semitism Movement, enabled speakers and viewers to hear about tactics to fight hate.

Frankfurt Mayor Uwe Becker warned, “When Jews, our citizens, ask themselves if they will have a safe and secure future in our cities; when boys don’t like to wear kippot and decide to wear a baseball cap instead; when girls hide the Star of David on their necklaces … then it is not five to 12, but 10 past 12, and we have to push back… It’s up to us to act.” 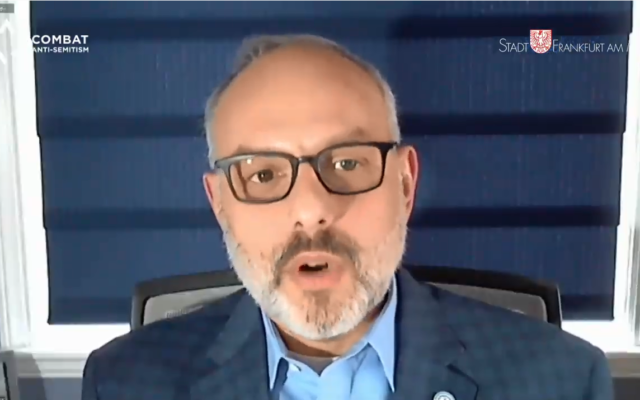 Jeffrey Finkelstein, president and CEO of the Jewish Federation of Greater Pittsburgh, who also participated at the summit, credited Peduto and other western Pennsylvania leaders — including former Islamic Center of Pittsburgh executive director Wasi Mohamed — with helping combat anti-Semitism.

During an afternoon session titled “Reaction — Healing in the Face of Trauma,” Finkelstein elaborated on the “deep relationships” local leaders share with Pittsburgh’s Jewish institutions. These bonds, said Finkelstein, are evidenced by the “giant hug that we felt and continue to feel.” Finkelstein explained how the Federation responded to both short- term and long-term community needs following the attack at the Tree of Life building. In addition to convening an Oct. 28, 2018, gathering for thousands at Soldiers & Sailors Memorial Hall & Museum, the Federation hosted a security briefing for Pittsburgh’s Jewish institutions “and hired armed guards for every single organization for about a month,” said Finkelstein: “The idea was resilience. We didn't want people not showing up to our Jewish institutions.”

Pittsburgh’s 10.27 Healing Partnership, a collaboration of community, government and faith-based organizations, continues to help community members heal from trauma, said Finkelstein. “When it comes to resilience we went from an attack, as did Poway, right into a pandemic,” he said. “So, it's been a nonstop cycle. Keeping people resilient and making sure that their mental health is as strong as can be has been a real priority in our community.”

Partners in the summit included the Jewish Federations of North America, B’nai B’rith International, Israel’s Ministry of Foreign Affairs, the Jewish Council for Public Affairs and The Centre for Israel and Jewish Affairs. PJC