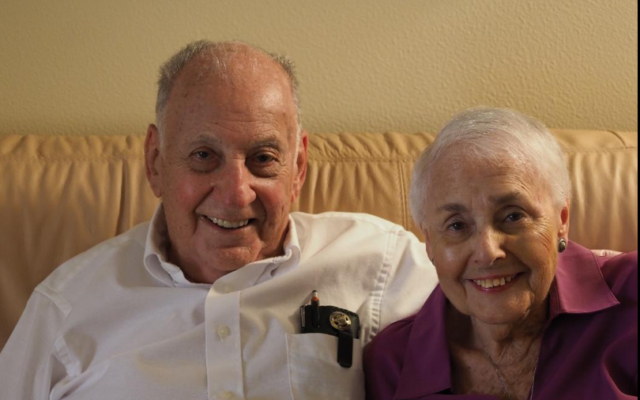 For Debbie Leuchter Stueber, the story of how her parents survived the Holocaust unfolded over time and in snippets of memory.

Her father, Kurt, born in Vienna, trekking from Austria to Belgium, then turned over to a Jewish aid agency in the south of France as his parents were sent to Auschwitz to perish. He later fought in the French underground and traveled to the U.S.

Her mother, Edith, born in Bruchsal, Germany, witness to a synagogue burning on Kristallnacht, then also turned over to an aid agency, raised in France – a French Girl Scout, no less – and emigrating to New York City after the war. 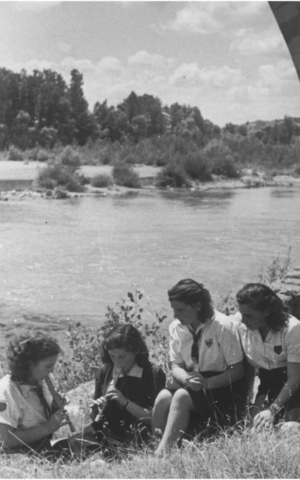 Edith Loeb and friends in the French Girl Scouts (Photo provided by Deborah Stueber)
Then, there is what Stueber knows from living in and around it. Her parents, now in their 90s and rounding out their 70th wedding anniversary, live today in Florida. They met in a European orphanage as teens through the Œuvre de secours aux enfants (the OSE, a French Jewish children’s aid society) and bumped into each other after the war on the street outside the Museum of Modern Art in Manhattan. The rest, as they say, is history.

To this day, even after years of reciting the war stories for local school children, Stueber has difficulty imagining what it was like for her grandparents to say goodbye to their children, en route to what became a horrible fate.

“It’s very emotional to repeat the story,” said Stueber, who was raised on Long Island and moved to Pittsburgh nearly 30 years ago. “It is my responsibility and it is my passion in life to tell my parents’ story – to educate people about the Holocaust, to teach tolerance and to ensure it will never happen again.”

Stueber shared her family’s Holocaust narratives last month to kick off the Holocaust Center of Pittsburgh’s summer programming. This time, the setting was not a classroom in Stueber’s Fox Chapel Area School District but video teleconferencing.

Has the repetition of the story helped ground Stueber, or made her come to terms with the gravity of the narrative?

“I don’t think ‘come to terms’ is the right term,” she said. “They have a responsibility to tell the stories until they can’t anymore. Then, it’s my turn.”

Providing a vehicle for these stories is only part of the Holocaust Center’s mission in summer programming in the age of COVID-19.

“For a while now, we have known that hate groups find success with spreading their rhetoric via sophisticated use of the internet,” said Lauren Bairnsfather, the director of the Holocaust Center of Pittsburgh. “By using a digital platform of our own, we are able to directly combat hatred by making use of the same technology.

“The COVID era has brought great difficulties for so many while presenting unexpected opportunities to grow our programs’ impact through technology,” Bairnsfather added. “Our reach has never been larger. One example is our annual Yom HaShoah, or Holocaust Remembrance Day. When we hold a program in person, we normally see 400 attendees. This year’s digital program has been watched about 10,000 times by viewers from across the world, and that number is still going up.”

One event sure to draw a crowd online comes in the Conversations Series, which features everything from lay leaders to religious figures to educators. On July 20 at noon, artist and Holocaust Center staffer Marcel Walker will talk about the center’s CHUTZ-POW! comic book series.

The fourth volume in the CHUTZ-POW! series, whose theme is women’s stories, currently is being wrapped up and features 10 creative artists – the most employed ever for a single edition of CHUTZ-POW!, according to Walker. 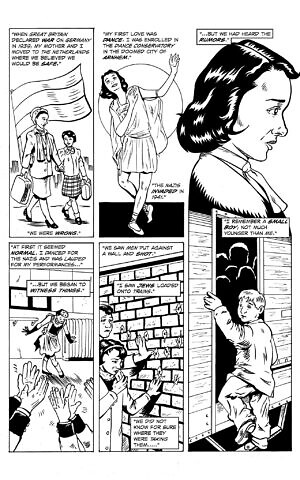 “We’re always told women’s stories but we want to really focus this time,” Walker said. “And we wanted to make sure, both in the subjects being worked on as well as the artists, we were as inclusive as possible.”

Walker stressed that no two sessions on CHUTZ-POW! have been the same – there’s a lot into which presenters and attendees can delve.

“Sometimes, you can learn a history of a person or people and get a comics lesson,” Walker explained. “CHUTZ-POW! serves as a nice introduction to these kinds of things – to biographies, to the Holocaust as a subject, and to history.”

CHUTZ-POW! is also very intentional in how it educates, something that a Holocaust narrative like “The Diary of Anne Frank” or Art Spiegelman’s “MAUS” can’t necessarily claim.

“None of those works were created with scholastic intent,” Walker said. “CHUTZ-POW! is designed to be read by middle and high schools kids and up, generally speaking 12-year-olds and up – that’s important to note.”

All Holocaust Center events are free and open to the public, and all event recordings will continue to be available after they have taken place on the Holocaust Center’s website. PJC