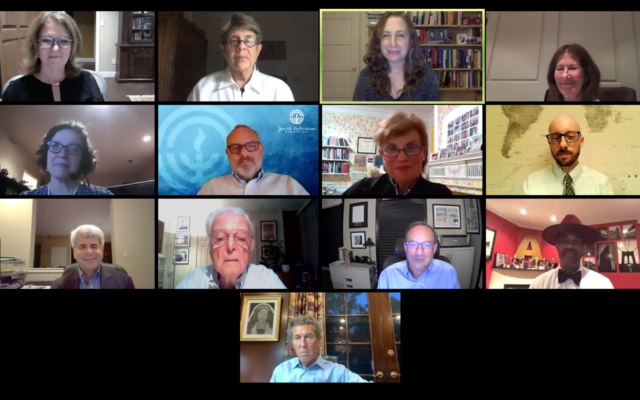 The Holocaust Center of Pittsburgh celebrated its 40th anniversary virtually on Wednesday, Sept. 2, during a Zoom webinar.

The event, dubbed “Past, Present and Future,” featured community members who have supported the Center and Holocaust education through the years, including Holocaust Center Director Lauren Bairnsfather and Jewish Federation of Greater Pittsburgh President and CEO Jeffrey Finkelstein.

Barbara Shapira, chair of the Center’s advisory board, opened the program by recounting the events of Jan. 29, 1979, when a group of Pittsburghers formed the Pittsburgh Holocaust Committee with the intention of creating a memorial to the Shoah. The committee’s simple plans were soon updated with a broader vision.

“The committee very quickly went further,” Shapira said. “It agreed that a physical monument alone was not enough. It recognized that a physical presence and the symbolism it can project can impact and influence. However, a living memorial, dynamic and human, must be the essence of the effort to remember.”

Shapira said the intention was for the Center to include a museum, library, classrooms, meeting spaces and audiovisual center, and have the capacity to sponsor exhibits, conferences, commemorations and oral histories. She recounted the Center’s journey from original director Isaiah Kuperstein’s office in the former Oakland JCC building to its subsequent locations in Squirrel Hill and Oakland, and its present home in Greenfield.

“Plans are in the works to return to the heart of the Jewish community in 2021,” Shapira noted.

The Center may be relocating to the Tree of Life*Or L’Simcha building in Squirrel Hill when it is eventually refurbished. Jeff Letwin, co-chair of the steering committee at Tree of Life, said it would be a “tremendous opportunity” for the Holocaust Center to have a presence at “the site of the worst anti-Semitic attack in U.S. history.”

“The Center teaches what can happen when such beliefs get out of control,” he said. “By working on educating the educators, teaching the public, training law and order professionals and, frankly, exposing those completely unaware of the horrors of the Holocaust, which is unfortunately a growing number in America, we hope that history will not repeat itself for the Jewish people, for any people.”

Emmy Award-winning producer Emmai Alaquiva, whose exhibit “Optic Voices: Roots” was displayed at the Holocaust Center in 2019, discussed the bridge between activism and art and why, as an African American, he felt it important to have his work displayed at the Center.

Shaler Area School District teacher Nick Haberman, the 2018 Holocaust Educator of the Year who created the Leadership through Innovation in Genocide and Human Rights Teaching Initiative, was also featured at the event.

While Bairnsfather understands that Zoom fatigue may be setting in across the Jewish community, she said it was nonetheless important to mark this anniversary.

“I said, ‘This will be worth it, people need to hear from us. It’s been 40 years, let’s do something special,’” she said, adding it was “very emotional to see all those people who’ve been involved all these years.”

The Holocaust Center of Pittsburgh will continue to mark its 40th anniversary by offering online exhibits throughout the year, including an archive of past press coverage and a digital photo album, an exploration of the Center’s history and a time capsule. Its “CHUTZ-POW!” comic books, volumes I-III, will also be available online. PJC