Malaika Uwamahoro was a child living in Uganda when the 1994 genocide against the Tutsi took place in her native Rwanda.

“I was 4 when it happened,” Uwamahoro told the Chronicle. “I could see my grandmother near the radio crying. I didn’t know why she was crying. I would hear small things like, ‘They’re killing them.’ I didn’t know what was up, but I knew something was up.”

The genocide that began on April 7, 1994, resulted in the death of over half a million people during 100 days of murder and violence.

Performing in “Miracle in Rwanda,” a one-woman play, is deeply personal for Uwamahoro, an actor, musician, poet and social activist. She was born in Rwanda but spent her first seven years in Uganda before moving to the United States. She moved back to Rwanda in 2001, then returned to the U.S. in 2013 to study theater at Fordham University.

On April 10, the Holocaust Center of Pittsburgh partnered with Prime Stage Theatre for a special Zoom production of the play in honor of Genocide Awareness Month. It is available for streaming April 16-26.

“Miracle in Rwanda” director Steven Wilson was not aware of the enormity of the slaughter of the Tutsi minority by Rwandan militias until he was asked to direct the show, he said. Now, the South Hills native is invested in the story and wants more people to learn about what happened in the African nation.

The play is based on the life of New York Times bestselling author Immaculée Ilibagiza, chronicling her experiences during the 1994 genocide against the Tutsi.

Uwamahoro previously performed “Miracle in Rwanda” at Theatre Row-The Lion Theatre in New York City, handpicked for the role by the play’s author, Leslie Lewis, in 2019. She is excited to perform the work again as part of Genocide Awareness Month, she said, and for the opportunity to work with Wilson.

Wilson said he’s attracted to stories about social justice and activism and was drawn to help Uwamahoro tell the story, despite being removed from the subject matter.

“This is a Rwandan story with a Rwandan performer,” he said. “I am very aware of the vessel I appear in. I wanted to make it very clear to Malaika that I’m not here to dictate any sort of perspective. The perspective is Malaika’s. She’s the expert.”

Both Wilson and Uwamahoro are seasoned artists. Wilson has directed more than 20 shows, including classics by Shakespeare and contemporary pieces like “A Very Merry Unauthorized Children’s Scientology Pageant.” Uwamahoro has appeared in film, television and stage productions. Still, staging a play in the age of COVID-19 for an online audience was unusual for both of them.

“It was a unique experience,” Uwamahoro said. “I think you have to be very clear with your direction and very articulate about what you want and not get frustrated by these boxes. That’s what Steven was able to clearly do.” 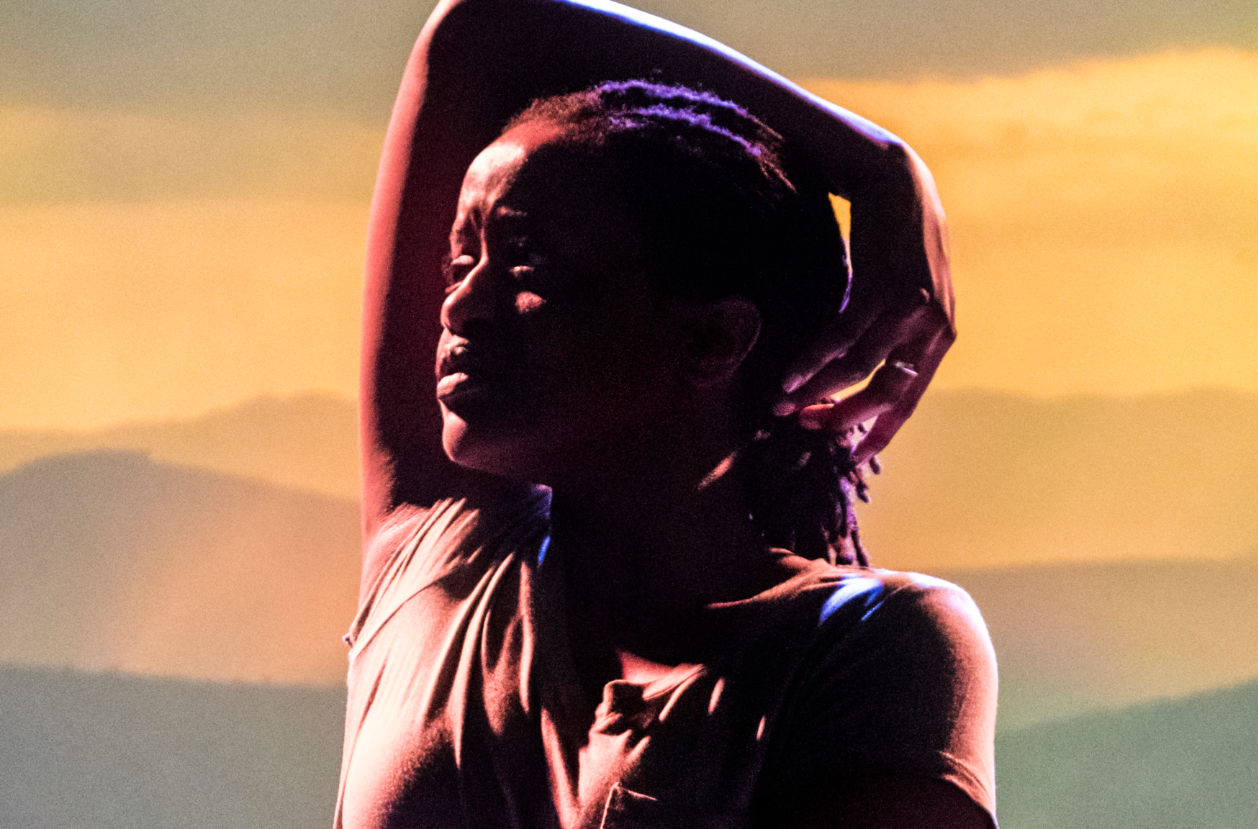 Like live theater, collaboration is important to Zoom productions, Wilson said. He credits not just Uwamahoro and Rwandan musician Teta Diana for helping to create an immersive experience, but also HearCorp, a multimedia company, for assisting him in crafting his vision.

“I feel like we’re still trying to figure out what exactly theater is now,” Wilson said. “This is very much a hybrid of film and theater. I’m used to working with performers and artists and designers and with this I walked in and HearCorp were like, ‘What do you want? Tell us what you want, and we’ll make it happen.’”

“There’s an aerial camera, there’s three cameras on the ground, one’s on a dolly that moves, one center, and one is on another side, stationary,” he said.

With all of the angles and the new way of looking at the production, Wilson said that HearCorp staff often had to remind him to not get distracted by the look of what was happening on the stage, and instead focus on the various monitors.

“It’s really wild, the options you have, and maybe it does give it a very cinematic feel,” Wilson said. “But at the same time, it’s obvious this is a live presentation.”

Lauren Apter Bairnsfather, director of the Holocaust Center of Pittsburgh, said the idea to produce “Miracle in Rwanda” came after a conversation with Prime Stage leaders, who wanted to do something in recognition of Yom HaShoah, which was observed on April 8.

Since the Holocaust Center already had its Yom HaShoah program planned, Bairnsfather thought a play in recognition of Genocide Awareness Month would make more sense.

“For genocide awareness, we want people to know that this is the growth in how we educate about the Holocaust,” Bairnsfather said. “We want people to realize that when we say, ‘Never again,’ we mean it, but genocides continue to happen. So, we haven’t reached ‘never again.’ We have a long way to go.”

On April 18, Pittsburgh’s Holocaust Center is teaming with the Holocaust and Genocide Center in Johannesburg, South Africa, for an hour-long international conversation. The public forum will include school children from Pittsburgh, South Africa and Rwanda. It will feature brief clips from the play as well as speakers Uwamahoro, Bairnsfather, Prime Stage Theatre Production Director Wayne Brinda and Johannesburg Holocaust and Genocide Executive Director Tali Nates.

Information on streaming the play and programming can be found at hcofpgh.org/rwanda. PJC