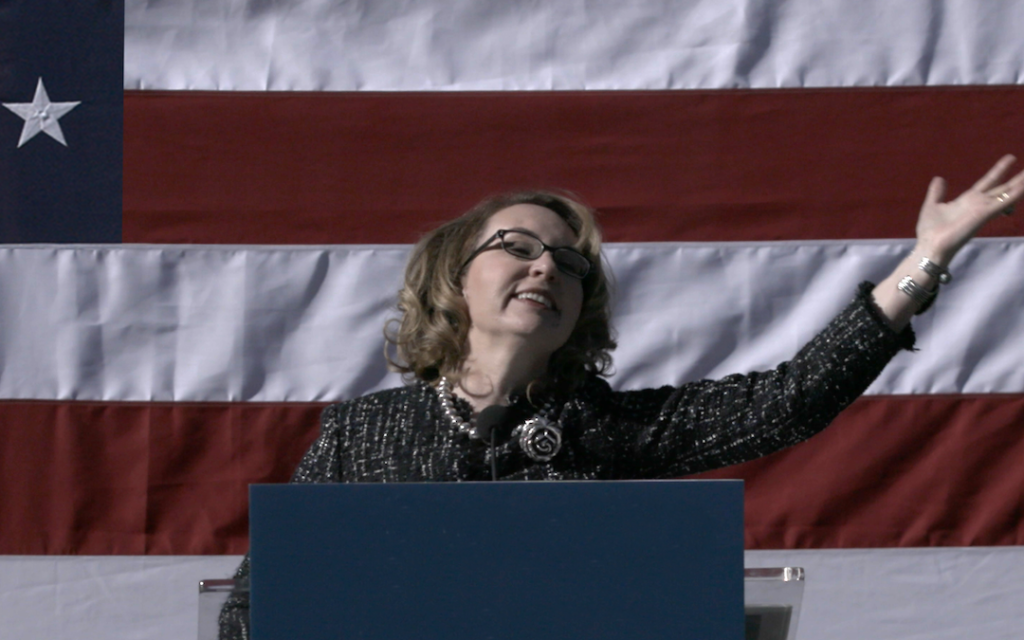 “Gabby Giffords Won’t Back Down” portrays Giffords’ relentless journey in the face of the tragic assassination attempt that changed her life in an instant on Jan. 8, 2011.

Giffords was shot at point-blank range in the head during her “Congress on Your Corner” constituent event outside a Tucson grocery store. The gunman killed six people, including a 9-year-old girl and wounded 12 others. In the panic of the mass shooting, some media outlets first reported Giffords was dead.

They also capture the personal story of Giffords and her husband, Mark Kelly, a former NASA astronaut and current Arizona senator.

With unprecedented access to filming the couple over two years, blended with Kelly’s home videos of Giffords in the hospital and rehab trying to regain her speech and mobility, Cohen and West give moviegoers a very candid view of Giffords’ perseverance.

Speaking with the filmmakers following the film’s premiere in Washington, D.C. with Giffords, they recalled the first time they met the couple during the pandemic over a Zoom call.

“A virtual meeting didn’t seem like the best way to begin a relationship, especially with someone who has aphasia, a brain condition that makes communication challenging,” said Cohen.

“But within a few minutes of meeting Gabby and her husband, Betsy and I were texting each other that we had to make a documentary about this phenomenal person.”

The directors said they were also compelled by the couple’s love story, which is reflected when Kelly retires from NASA in the wake of his wife’s profound injuries and assumes the role of caregiver.

Eventually, Giffords resigned from Congress to focus on her recovery. And a decade later, Kelly would decide to run and win the Senate seat once held by the late John McCain.

The filmmakers wanted to highlight these pivotal roles. In fact, in the film, Kelly reveals how he first thought his job going into space was risky, but as it turns out, it was actually his wife’s job that was riskier.

Cohen and West were also drawn to Giffords’ spirit, her love of music (which is incorporated artfully into the film and played a significant role in Giffords’ recovery) and her sense of humor.

Not only did Giffords tell them in that very first Zoom meeting that she was a fan of Ruth Bader Ginsburg and a fan of their “RBG” film, but she lifted her foot into the view of the camera to show she was wearing RBG socks.

Film footage shows Giffords as rising political star before the assassination attempt on her life, including her 2007 victory, when she became Arizona’s first Jewish congresswoman.

Celebrating her bat mitzvah in 2021, at age 51, at which she chanted prayers, sang along with the congregation and played “Amazing Grace” on the French horn, is part of Giffords’ incredible comeback story.

There’s a brief clip included in the film of Giffords practicing for her bat mitzvah.

Cohen and West recalled that during that filming, they were talking off camera with Rabbi Stephanie Aaron, the spiritual leader of Congregation Chaverim in Tucson.

“We spoke to Rabbi Aaron, who is Gabby’s rabbi and who Gabby is quite close to and had been close to before she was shot as well,” they said.

“The rabbi was in the hospital visiting her, in the early days when Gabby was first at the medical center in Tucson before she was transferred to Houston, and the rabbi talked about that during those early occasions being so concerned about Gabby’s survival that she even said a prayer. There’s a Jewish prayer that you say when you fear that the angel of death is near and Rabbi Aaron did say that prayer over Gabby in those early days.”

Today, Giffords’ transformation over tragedy keeps her busy running her organization Giffords.org, a nonprofit dedicated to preventing gun violence. And most recently, she’s been traveling to promote the film.

After the recent screening at The Loft Cinema in Tucson, Giffords and Kelly sent a video for the special presentation at Harkins Theatres Camelview at Fashion Square in Scottsdale, explaining the reason for their absence.

“Presidential Medal of Freedom,” said Giffords proudly, of the nation’s highest civilian honor at which she was presented on July 7, along with 17 other recipient, including the late John McCain.

As we see Giffords traveling on her recumbent trike in the film, she says, “I couldn’t walk, I couldn’t talk, now I’m giving speeches again. I tell myself move ahead. I don’t look back. Words once came easily and today I struggle to speak, but I have not lost my voice.” PJC

Kathy Shayna Shocket writes for the Jewish News in Arizona, an affiliated publication where this first appeared.