Still of researchers Paul Duprex and Anita McElroy in their lab with the photo of Jonas Salk and Julie Younger in the foreground. Image courtesy of Carl Kurlander

Sixty-six years after Dr. Jonas Salk and his University of Pittsburgh team declared the polio vaccine “safe and effective,” Jewish screenwriter, producer and academic Carl Kurlander returned to the topic of vaccination in his new documentary “Chasing COVID.”

The 30-minute film, which premiered with a virtual screening on April 12, focuses on virologist Paul Duprex, director of Pitt’s Center for Vaccine Research, and the collaboration required to tackle COVID-19. During an online panel discussion following the premier, Kurlander, a senior lecturer in Pitt’s English Department, shared his rationale for making the film, his desire to distribute the documentary to educators for free and his hope that students would disseminate the message of vaccine safety.

Duprex, a microbiologist, praised Kurlander’s efforts as a filmmaker to articulate the story of vaccine development and the role of researchers.

“All of that brings science closer to the public,” he said. “That’s how we make science trusted: We show that the people are normal individuals and they’re trustworthy individuals.”

“Chasing COVID” was produced by Pitt’s Center for Creativity through a grant from the Richard King Mellon Foundation. Kurlander, who produced and directed the film, credited producer Janet Smith and co-producer and editor Andy Esper with facilitating the project. 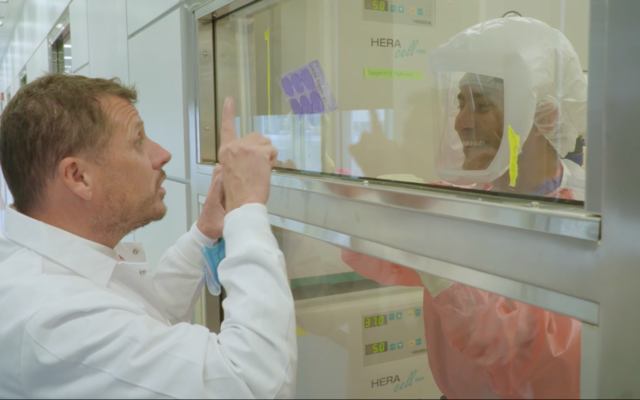 “Chasing COVID” builds on those films by encouraging students and educators to continue innovating, said Kurlander.

“This is not, as the doctors have pointed out, our last pathogen. We need them to learn to think out of the box, and we need to have teachers realize that they don’t have to stay in a lane. They can be creative.”

“The project to develop a polio vaccine not only involved the people directly engaged in the research and in the immunizing of the children, but this was something that the entire Pittsburgh community had given their hearts to and their bravery, and the people of the country,” said Salk, professor of infectious disease and microbiology at Pitt’s Graduate School of Public Health and president of the Jonas Salk Legacy Foundation.

Polio vaccine research, treatment and care was furthered by 100 million people who contributed to the March of Dimes, Salk said.

“So, when the polio vaccine was declared a success, this was the success of the people in this country,” he said. “This was not government grants. This was from the people.”

When it comes to ending the current pandemic, the broader society will likewise play a critical role, Salk said. Defeating COVID-19 isn’t about simply vaccinating as many people as possible, but addressing the “pockets of resistance” who are making it difficult to achieve herd immunity, he said. “This is a global issue that needs to be solved on a global basis. That’s something that I think we really need to turn our own creative attention to.”

“Particularly the young people need to know that’s why we made this movie,” he said. “They need to know that it’s possible that we can work together. That science, working creatively, can defeat a common enemy.”

Science and creativity “are not two separate things where you take off your lab coat and be creative, or you put on your lab coat and become analytical,” Kurlander told the Chronicle following the program. “These things are something that work hand in hand.”

Kurlander hopes “Chasing COVID” becomes a springboard for fostering originality and science, and he encouraged middle school and high school students to compete in the upcoming “Take a Shot at Changing the World Video Competition.”

Hosted by the University of Pittsburgh’s Center for Creativity and the Allegheny Intermediate Unit, the online video contest invites participants to create “positive, accurate and compelling information” about the COVID-19 vaccines. The competition runs between April 22 and May 30. PJC