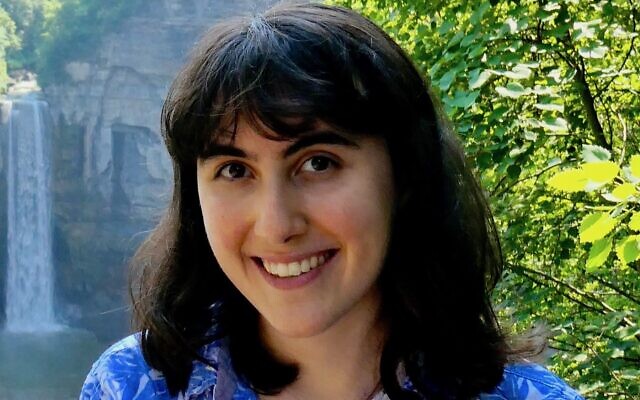 On Oct. 27, 2018, Pittsburgher Carrie Mannino watched the white supremacist attack at the Tree Of Life building unfold in a series of text messages while she was studying theater at Yale University.

Over the next few days, the media shined its spotlight on Squirrel Hill and the three congregations targeted in the attack: Tree of Life, New Light and Dor Hadash, where Mannino became a bat mitzvah years earlier.

“It was very strange and surreal for me to see my community talked about on this international level — suddenly, everybody was talking about my community,” Mannino told the Chronicle in a recent interview. “I wanted to go through that grieving process with my community.”

Mannino’s process of healing led her toward what would become her next theater project: a staged reading of a play about the 2018 massacre, culled from pages and pages of interviews with those who were on the front lines.

“Just for my own grieving and healing process, I needed to talk to people,” Mannino said.

Mannino graduated from Yale University in 2020; her thesis project in playwriting was “It Couldn’t Happen Here,” the documentary play about Pittsburgh and its Jewish community in the aftermath of the antisemitic attack which left 11 worshippers dead and two seriously wounded.

Mannino will stage a virtual reading of the play — which was selected for the Yale Playwrights Festival and awarded the Yale Playwriting Award — in late August. She will serve as the reading’s director, then plans to edit the Zoom footage of the reading into a proper performance piece, she said.

The play is based on interviews with everyone from Pittsburgh Mayor Bill Peduto, for whom Mannino interned during college, to area artists and prominent members of Pittsburgh’s Jewish community.

“In this country, there are so many mass shootings [and] the media moves so fast,” Mannino said. “I really wanted to talk to people about what that process looks like. I was trying to tell a story about trauma and how a community processes something unfathomable like this.”

Mannino was bitten early by the documentary theater bug. While a student at Winchester Thurston School, she was involved with a staging of “The Laramie Project,” a play based on interviews that chronicles the reaction to the 1998 murder of gay college student Matthew Shepard in Wyoming.

Haley Platt, on the other hand, is new to documentary theater but is excited to be taking part as an actor in “It Couldn’t Happen Here.” The University of Pittsburgh graduate — who does not hail from the city — interned alongside Mannino in the mayor’s office and saw, up close, the interviews of Peduto and his chief of staff, Dan Gilman.

“After our first reading of the script as a full cast, we were all in tears — because even people who are not from here are connected to this play,” said Platt, who is Jewish.

Zoe Levine, also an actor in the upcoming staged reading, met Mannino in the Jewish community — namely, through the organization Repair the World, whose mission centers around the Jewish concept of tikkun olam. 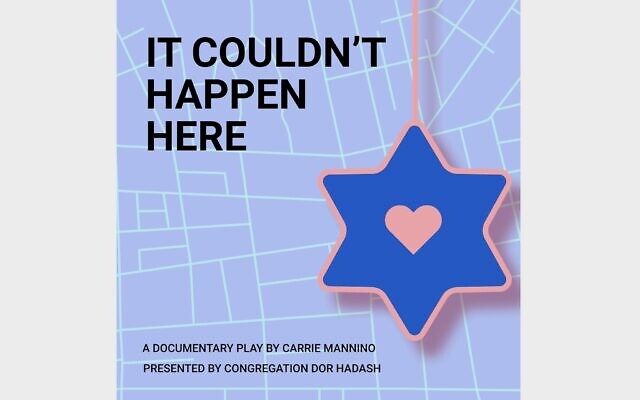 “I love theater and I look forward to continue doing it as a side love,” said Levine, a Jewish Erie native who graduated this year from Chatham University. “I saw this topic and it really resonated with me. I thought the play could be so important.”

Levine was at Chatham on the morning of the 2018 shooting — just steps away from the Tree of Life building. Her memories speak to the impact Mannino’s play is trying to tap.

“For me, it’s a very present and traumatic memory,” Levine said. “It was very surreal to read it. The vigil at Forbes and Murray? I was there. The Bend the Arc protest? I was there … It’s been kind of good for me to do this. The whole thing has been surreal but, ultimately, good for me.”

The play also has a champion in Maggie Feinstein, who heads the 10.27 Healing Partnership. She said she hopes to spread the word about readings of the play.

“It Couldn’t Happen Here” will be presented by Congregation Dor Hadash and screened via Zoom webinars on Sunday, Aug. 22 at 2 p.m. and Thursday, Aug. 26 at 7 p.m. Tickets are free and will be available online at the event page. PJC