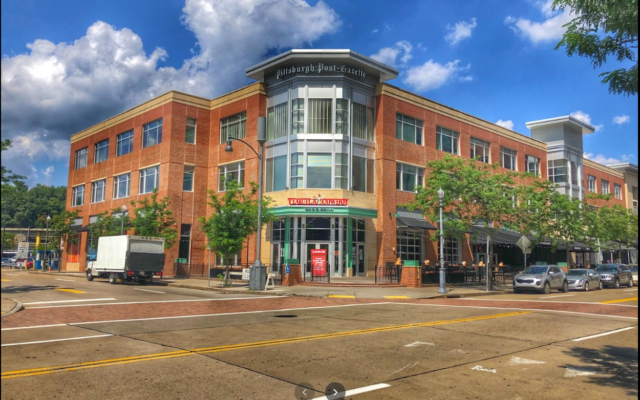 The exterior of the Pittsburgh Post-Gazette building. Screenshot from Google Streetview

For some Jewish Pittsburghers, the Oct. 31 decision by the Pittsburgh Post-Gazette editorial board to endorse Donald Trump for president was more trick than treat.

The editorial stated in part: “This newspaper has not supported a Republican for president since 1972. But we believe Mr. Trump, for all his faults, is the better choice this year.”

Both readers and newspaper employees spoke out against the endorsement. In two Facebook posts, Post-Gazette columnist Tony Norman disavowed it, distinguishing between the news and editorial desks, which operate independently of one another.

Squirrel Hill resident Barbara Bauman first canceled her subscription to the daily in 2018 when editorial cartoonist Rob Rogers was fired, and she perceived the paper’s shift from a liberal-leaning editorial stance to a more conservative position.

“That did not align with our values, to limit [Rogers’] free speech,” Bauman said.

Six months ago, Bauman decided to pay for a limited digital subscription because she values “the opinion columnists of the P-G and obviously support our city and want to know what’s going on,” she said. When the paper endorsed Trump, though, she again canceled her subscription.

Bauman said her dislike of Trump is “more of a value conflict than simply a policy difference. I find many things about Donald Trump troubling. I’m a member of Dor Hadash. My dear friend Jerry Rabinowitz was killed, I believe, because of what Donald Trump said about people helping a caravan invade our country.”

Rabbi Jamie Gibson wrestled with the Post-Gazette’s editorial endorsing Trump and eventually decided to cancel his subscription. He called his decision “painful.”

The Post-Gazette “has been my lifeline to how my hometown responds to every event in our region, whether it’s good or bad,” said Gibson. “It’s not just about crime. It’s not just about sports. It covers what’s important to us, school board meetings and issues that the national news is never going to take up and that local news doesn’t have time to [cover] in a 22-minute broadcast.”

Gibson said the ownership of the paper has made a conscious decision to reflect a more conservative viewpoint, consistent with publisher John Block’s point of view.

“And I’m very much challenged by the orientation of that,” he said.

South Hills resident Alan Rosenthal canceled his subscription prior to the paper’s endorsement of Trump but continued to occasionally read it. It was another controversial editorial, published on Martin Luther King Jr., Day in 2018, that was the final straw.

“They basically said that too many people are being accused of racism,” Rosenthal said. “I think the title of the article was ‘Reason as Racism.’ It was that editorial that showed me that John Block was just repeating Trump talking points. I found it offensive, especially that they would do it Martin Luther King, Jr. Day.”

Rosenthal is comfortable with opinions different than his own, he said, and reads George Will, Andrew Sullivan and other conservative columnists. “What you’re seeing with Block and [Keith] Burris (editor of the Post-Gazette) “is that it’s right wing,” he said. “It’s a right-wing viewpoint.”

Rosenthal understands a newspaper has the right to endorse any candidate it chooses.

“I didn’t like it, but it’s the paper’s First Amendment right to endorse a candidate I don’t like.”

Some Jewish Pittsburghers were pleased to see the pro-Trump stance.

Nonna Neft found the Post-Gazette’s endorsement a welcome change to much of what she sees in the media. She agreed with the paper’s decision, “because it’s aligned with my support of pretty much all the decisions that Donald Trump has made when it comes to the Jews,” she said, and “is in line with my general support of his policies and actions.”

Neft is not a subscriber to the paper but said that the editorial board’s decision made her feel proud. The endorsement showed the Post-Gazette was more progressive than people think.

“They were willing to assess the facts and made a decision, not based on the same old, same old, or because they’ve always been doing it this way,” she said. “It showed that they’re assessing the situation as it happens.”

Trump’s support of Israel and his decision to move the U.S. embassy to Jerusalem are some of the reasons Neft supports Trump. While the paper’s endorsement did not influence her decision on whom to vote for, “it just makes me feel better,” she said.

Historically, newspapers have served as a proxy for the public, asking questions of people in power, according to Andrew Conte, director of Point Park University’s Center for Media Innovation. At one time, he said, editorial boards would meet with individual candidates before offering an endorsement.

Conte was not aware if the Post-Gazette editorial board met with Trump or Biden before making its endorsement.

Readers have a visceral reaction to a paper’s endorsement because “people that have a subscription to a newspaper feel some affection toward it,” Conte said. “They spend time with the news product every day, or at least sometimes during the week and feel a connection with the familiar byline and with the editorial positions.”

People have grown accustomed to the Post-Gazette’s editorial position, Conte said. “To see that change now to an endorsement for Trump seems jarring for many people because it’s different than what they had come to expect from their local newspaper.”

While Gibson is troubled by the paper’s current editorial stance, there is still an opportunity for the Post-Gazette to win him back.

“If they issue a call for reconciliation,” he said. “If the paper issues an editorial that says we decry the president’s attempt to undermine the democratic process, as opposed to supporting the Trump administration’s attempt to gum up the works and avoid a peaceful transition. And if they came out forthrightly, the way Sen. Mitt Romney has done, the way Gov. Larry Hogan in Maryland has done, the way some other brave Republican leaders have done, I would very strongly consider reestablishing myself.”

The Pittsburgh Jewish Chronicle reached out to Burris, editor, vice president and editorial director of Block Newspapers, who declined to comment. Burris directed the Chronicle to publisher, editor-in-chief and head of the editorial board John Block, who did not respond to attempts to reach him. PJC