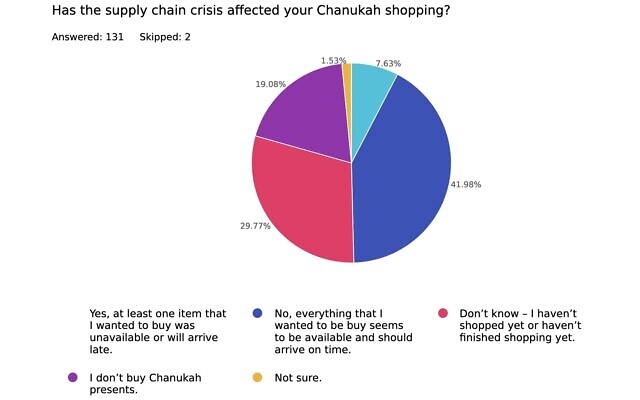 Last week, the Chronicle asked its readers in an electronic poll the following question: “Has the supply chain crisis affected your Chanukah shopping?” Of the 133 people who responded, 42% said that everything they wanted to buy was available and should arrive on time; only 8% said that at least one item they wanted to buy was unavailable or would arrive late. Thirty percent said they didn’t know because they had not finished their shopping yet, and 19% said they do not buy Chanukah presents. Thirty people submitted comments. A few follow.

Supply chain shortages are global in nature. Shortages of land, labor, capital and transportation are worldwide. Lack of labor will most likely be the disaster of the future for our nation. Until we open the border and train a new generation shortages will continue.

I followed advice and ordered early. My gifts are already wrapped!

It’s not affecting Chanukah — but it’s affecting everything else!

We have tried to deemphasize Chanukah gifts because it is not a Jewish custom, but rather an adopted part of our surrounding culture. With that in mind, our gifts are very limited, modest and purchased well in advance. I detest going into stores at this time of year. A December spent in Israel was paradise!

As my grandchildren are getting older, it becomes more difficult to find gifts they will like. Last year I started giving them checks so they can buy what they want. Even checks for my adult children.

I prefer to give Israel bonds for Chanukah.

I give Hanukkah gelt to grandchildren.

I did most of my Chanukah shopping online, and I always start early.

Surprisingly all have arrived earlier than expected.

It’s not Christmas, and shopping sprees are a new phenomenon. Purim is when gifts are given. Sch’lach manot!

People go crazy spending beyond their means. A word to the wise: Spend less than you bring in, and you’ll never be poor. PJC